From The Archives: Rip It Up – Tales Of The Tracks/Willy Moon 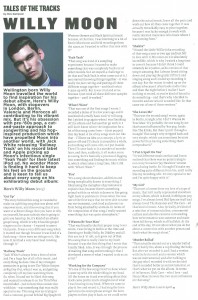 TALES OF THE TRACKS/WILLY MOON
by Des Sampson

Wellington born Willy Moon travelled the world to find inspiration for his debut album, Here’s Willy Moon, with stopovers in London, Berlin, Valencia and Morocco all contributing to its vibrant mix. But it’s his obsession with pre-‘60s pop, a cut-and-paste approach to songwriting and hip hop-inspired production which have propelled Moon into another world, with Jack White releasing ‘Railway Track’ on his record label and Apple picking up Moon’s infectious single ‘Yeah Yeah’ for their latest iPod ad. No wonder Moon is finding it hard to keep his feet on the ground and is keen to tell us about every song on his exhilarating debut album: Here’s Willy Moon (2013)

Get Up
“The story behind this song is I wanted to make an uplifting song that was about self-empowerment, and discovering that if you want to achieve things then you have to rely on yourself, because nobody else is going to give you hand up. So, it’s kind of an atheist gospel song, which is why it has the gospel singers on the chorus – I wanted to assert that point. It was a very different song when it started out though because it was kind of a funk song — there were no strings on it, like now. It just had a very basic beat running through it.”

Railway Track
“Jack White’s always been a hero of mine and I’m a huge fan of all of his music, and everything he does. One of my strongest memories is going to see The White Stripes at Big Day Out, when I was 15, and getting completely off my face watching them. So, when I found out he liked this song and wanted to release it on his Third Man record label – just to have that connection with him – was something that was really special to me. This song was me trying to find a common ground behind big Spaghetti Western themes and Black Spiritual music because, at the time, I was listening to a lot of Ennio Morricone and field recordings from the 1920s, so I wanted to reflect that mix with it.”

Yeah Yeah
“That song was kind of a sampling experiment because I wanted to make something that was completely built out of other records. So I set myself a challenge to do that and Yeah Yeah is what came out of it. I just started throwing things together – it was really me just cutting and pasting all these different songs together – and that’s what I came up with. But it was trial and error, because I just tried all these different samples together – until it worked.”

What I Want
“That was one of the first songs I wrote. I recorded a demo of it a few years ago and it was kind of a really basic rock ‘n’ roll song. But I picked it up again when I was finishing off the album and had another go with it. I still don’t know where the inspiration for a lot of that song came from – it just popped into my head. A lot of my songs start out like that – I’ll have an idea or a concept, a lyric or guitar riff and I’ll chuck it around for a while, and nothing will come of it, so I put it aside. Then I’ll come back to it a number of months later, and then, suddenly, it all makes sense as a song. So it’s basically a process of digging into something and finding the music within it, which often takes a long time, like it did with ‘What I Want.”’

Fire
“It’s a song about obsession, addiction and being inexplicably drawn to something. I liked using the metaphor of pyromania to explain that, because there’s something primal within us which is drawn to fire going right back to prehistoric times when fire was one of the first ways that we were able to tame our environment, cook food and protect us from being attacked by animals. In terms of the composition of that song, I really wanted something that was quite atmospheric.”

I Wanna Be Your Man
“That was literally the first proper song I ever wrote. I was living in Berlin at the time and listening to Buddy Holly, Bo Diddley and all this 50s rock ‘n’ roll, so it grew out of that. lt’s a song that is really close to my heart because it was the first thing that I wrote that I really liked. Also, it was through the process of making that song and recording it that I developed a sense of what I wanted to do as an artist.”

Working for the Company
“It’s one of the few songs that I’ve done where I came up with the whole thing in my head. All the horns on it and everything about that track came pretty much straight out of what I was hearing in my head. When we came to play it live and record it, I had sing the horn parts into the microphone and get the horn players to then play it back, so we could write down the actual music, learn all the parts and work out how all they came together. It was actually remarkably easy to piece together, because I was lucky enough to work with really talented musicians who knew where I was coming from.”

Shakin’
“I found the Little Willie John recording of that song a year or two ago and just fell in love with it. His voice on it is absolutely incredible, which is why I waited a long time to cover it because I didn’t think I could remotely do it justice, as his version of that song is amazing. But I always loved sitting down and playing the guitar riff in it and singing along and I ended up recording it one day. But the reason it ended up on the album is because I often book studio time and then the night before I realise I have nothing to record, so you’re kind of forced to do something – and that’s why I decided to record it and see what it sounded like. So that came out of one of those sessions.”

She Loves Me
“That was the second song I wrote, again in Berlin, straight after I did ‘I Wanna Be Your Man.’ It’s probably the one song by me that’s most influenced by ‘60s pop, bands like The Kinks. But then I put it through a mangle! That song’s very stripped back and very simple, which can sometimes be more powerful than having something that’s overproduced.”

I Put A Spell On You
“I tried different vocals on that and I soon realised that there was no point trying to out-crazy Screamin’ Jay Hawkins’ version was a losing battle. So I thought I’d make my recording quite different from his, and I really like my recording of it. It’s very special to me and I’m quite happy with it.”

My Girl
“That sort of comes from my love of a type of music, that isn’t really represented elsewhere on my album, which is dumb, bubblegum pop songs. I’ve always loved Phil Spector stuff and always loved The Ramones and The Cars – all that kind of music. Also, lyrically, it’s kind of a rejection of commercialism, consumerist culture and also the customs surrounding how we’re meant to woo someone and make them fall for us, which is all bullshit. At the end of the day, it’s not about what you do but about a connection with another person and that’s what the songs about.”

Murder Ballad
“That actually started out as a murder ballad and it had lyrics, about a cop finding the body. But after we recorded it, and I had a version with the lyrics on it and a version which was an instrumental, and after talking to the guy who I recorded it with we decided that it sounded better as an instrumental, so that’s what we put on the album. In terms of influences, Nick Cave – who I love – and Henry Mancini were the two main influences on that song.”

‘Here’s Willy Moon’ is out in April.