From The Archives: Rip It Up – Shihad/Beautiful Machine 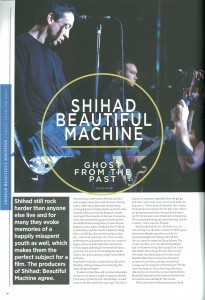 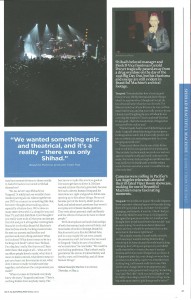 Shihad: Beautiful Machine/Ghost From The Past
By Steve Newall

Shihad still rock harder than anyone else live and for many they evoke memories of a happily misspent youth as well, which makes them the perfect subject for a film. The producers of Shihad: Beautiful Machine agree.

Everyone’s got a story about Shihad and their own unique connection with the band. Having a spew while they played one of their many evening Big Day Out slots maybe, or (much more romantically) a pash on the footpath outside Auckland’s Power station in the ‘90s. l’ve had my share, the proudest being part of making their incredible homecoming show at Aotea Square happen in 2005 when I worked at the NZ Music Commission, and the most fun memory being their 2010 Killjoy show on my last day at that job — what I can remember of it.

Their records, performances and presence across our country’s stages, airwaves, and media have intersected with so many individuals’ lives over the last 22 years that the notion of cramming the band’s history into a documentary might seem almost foolhardy. Somehow it’s all been condensed into ‘Beautiful Machine’, hitting cinema screens during this year’s NZ Music Month.

Producers Grant Roa and Laurence Alexander, the former whom you might recognise as kindly Uncle Rawiri from the ﬁlm Whale Rider, started work on the ﬁlm some four years ago. The idea of a band documentary appealed from the get-go, and their choice of act was never too far away. As Roa puts it, “You’re kind of limited in this country for music documentaries for the big screen. There are groups you can look at doing something for on TV, but we were never interested in doing that. We wanted something epic and theatrical, and it’s a reality — there was only Shihad.”

Roa already had his own Shihad story — he was a bouncer at the James Caberet in Wellington almost two decades ago when crowds of a thousand people were being sardined into the 270-capacity venue for Shihad shows. The crowd, says Roa, was “just absolutely mental, and I remember sitting there going ‘fuck I hate this music’. But I always found it fascinating.” Obviously that fascination still exists, since Beautiful Machine involved an exhaustive process of interviews, poring over archival footage and shooting live performances. “Off the top of my head, we had something ridiculous like 600 hours of content, so poor Cushla Dillon [Beautiful Machines editor] just sat there for the first month and watched it,” Roa recalls.

While the notion of documenting the band may have seemed obvious to those outside it, I ask if it had ever occurred to Shihad themselves?
“No, no, never,” says Shihad’s Jon Toogood. “A while back we wouldn’t have minded putting all our videos together on one DVD or a concert or something like that, but never thought about making a doco, especially a feature doco. We’ve done so many interviews with C4 along the way and Max TV, and blah blah blah. I just thought if you really want to do all that you can just get that shit and put it all together. Getting Sam Peacocke involved [as Beautiful Machine’s director] was a lucky fucking masterstroke. He met our parents and families and partners and everything and went ‘What is this about? What does it mean to be in a fucking rock band?’ rather than ‘Shihad, I’m a big fan, I really like that record’. Sam didn’t have that angle at all — ‘what are the sacriﬁces people have to make, what does it mean to make a record, what does it mean to put your heart out for everyone to see, what does it mean to make mistakes and stay together, and what are the compromises you make?’

“When it comes to the band everybody knew the story,” Toogood continues. “There’s nothing hidden from anybody really. The best move to make this movie as good as it is was to get Sam to direct it. [He] just wanted to know the story genuinely because he’s such a decent human being and his intentions are right and good we felt at ease opening up to him about things. He sort of became part of the family, didn’t push too hard, and asked smart questions that weren’t everyday sort of music media questions. They were about personal stuff and family and the effects of what we do have on those people.”

With its emphasis on band relationships of both the internal and external kinds, and mountains of archival footage, Beautiful Machine isn’t just a ﬁlm for Shihad fans, and in a way maybe it’s not even a music documentary at all. Let’s leave the last word to Toogood: “Really its sort of incidental we’re musicians,” he concludes. “We could be any fucking profession. That’s what’s really good about the movie, it’s about family and loyalty, trust and friendship, and all those human things.”

Shihad’s beloved manager and Flesh D-Vice frontman Gerald Dwyer tragically passed away from a drug overdose on the day of the I996 Big Day Out, but his charisma and energy are still evident in Beautiful Machine’s archival footage.
Toogood: “It reminded me how charming and funny he was. The big funeral and death thing is what I focused on when I thought of Gerald, the loss of Gerald rather than the man himself. The film reminded me of how hilarious he was and how much fun he was, and that was really positive for me. I found myself laughing my arse off when he was counting the money in Timaru and stuff like that. It’s just gold — that’s the Gerald I sort of forgot, that was part of how cool he was.”

“I found it quite hard to watch John Kingston and Andy Craig talk about him dying, that was pretty fucking hard to watch, but it was really positive for me on a whole, just reminding me how fun it was hanging out with him.”

‘‘It was a real shame that he was a little bit too rock ‘n’ roll for his own good in the end ultimately. That mistake has been made over and over and over again around the world and it still continues to be made. We’ve been lucky enough to not fall into that trap and [Dwyer’s death] made us realise what a waste that was and what a waste it would be for any of us to do that.”

Cameras were rolling in Paciﬁer’s Los Angeles rehearsals ahead of their ill-fated Viper Room showcase, making for one of Beautiful Machine’s many fascinating moments.
Toogood: “lt’s terrible, it’s insane! I’d totally forgotten those expensive rehearsal spaces with people sitting there telling us what to do and where we should be changing, and honestly it was like I think I had put it out of my mind because it was so fucking awful. But again that goes on every day in LA and we just thought these people knew better than we did — and we were wrong. No one knows better about our music and how it should he presented than us but we’ve learnt that lesson right there.”

“lt’s actually insanity. I wasn’t really mentally 100% anyway. I was still reeling from fucking overdoing it in Australia and the world was fucking changing. Everything was going crazy and I didn’t really want to be in America because it was just fucking awful. It just sort of happened, you know. It all happened quite fast, even though we were there for what, 6 to 8 months, I can’t even remember how fucking long it all seemed really fast to me. That whole name change, there were arguments and arguments and arguments and me going “no fucking way” and “fuck this” and it was awful [laughs] — but it’s really interesting to watch! It’s very cringy to me, but at the same time it’s gold footage really isn’t it?” 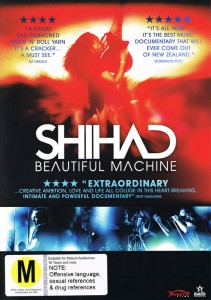