From The Archives: Rip It Up – Orchestra of Spheres/Planetary Alignment 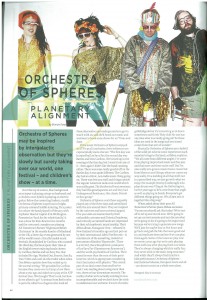 Orchestra of Spheres may be inspired by intergalactic observation but they’re slowly but surely taking over our world, one festival – and children’s show – at a time.

Over the top of a naive, lilac background an octopus is playing a strap-on keyboard and a chicken-crow-hybrid is playing an electric guitar. Below the contorting limbs (12 in all) Orchestra of Spheres is spelt out in bright, primary-coloured bubble lettering. It’s a poster for a show the band played in February with Alphabet Head at Capital-E, in Wellington. Promoted as ‘funk for the whole family’, it was a show for kids.

Rewind two months and the costumed crusaders are playing All Tomorrow’s Parties’ ‘Nightmare Before Christmas’ in the seaside hamlet of Minehead in the UK; a three-day event generated by one of the world’s most critically lauded music festivals. Handpicked by Caribou, who curated the third day, the band spent their time at the English resort enjoying bands chosen by Caribou, Battles and Les Savy Fav, that included No Age, Washed Out, Fourtet, Sun Ra, Toro Y Moi and a raft of other indie who’s-whos. Dan Beban explains how they ended up in the surreal setting. “We got asked by Caribou because they came over to Camp a Low Hum about a year ago and asked us to play at the ATP festival then. We thought ‘That’s cool, but how do we afford to go?’ A woman from Berlin who is part of a collective of agents who book all these alternative and underground acts got in touch with us, said she’d heard our music and was keen to book some shows for us.” Done and done. 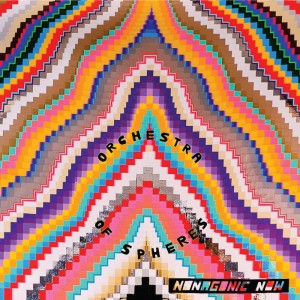 If the music Orchestra of Spheres enjoyed at ATP is at all conclusive, their influences are exponentially more obscure. “The first day was [curated by] Les Savy Fav, the second day was Battles and then Caribou. We turned up in the evening of the first day, but I wasn’t into any of it — then again I didn’t like the band curating, either. There was some really good stuff on the Battles day; it was quite different. The Caribou day had an ethnic, non-indie music thing going on. There was free jazz stuff and things outside the regular American indie-rock world which was really great. The Battles stuff was awesome; they had this great Japanese act and they had Underground Resistance, this classic Detroit techno group.”

Orchestra of Spheres could have arguably played any of the three days and assimilated with the acts around them. They are inspired by the universe and have universal appeal. Five year olds are mesmerised by their outlandish costumes and Oriental headwear, and critically acclaimed bands are impressed by their schizophrenic musicianship. Their debut album, ‘Nonagonic Now’ – released in New Zealand 18 months ago and just put out by their international label, Fire Records – is reminiscent of the assaulting, industrial percussion of Battles (‘Hypercube’, ‘There is a No No‘), the schizophrenic punk-jams of Les Savy Fav (‘Spontaneous Symmetry‘), and the world-psychedelia of Caribou.

Their sound is more than the sum of their parts however, which is appropriate considering their fascination with physics. “The cosmic part of our deal comes from stuff we’ve read. I was reading about using more than two, three or four dimensions recently. The reality of what we’re actually existing in is so incomprehensible and we don’t have the tools to understand our universe. It’s sort of cosmic gobbledigook but it’s interesting to sit down sometimes and think ‘Holy shit! No one has any idea what is actually going on!’ So those ideas are used in the songs and our sound comes from that sort of wonder.”

Musically Orchestra of Spheres are a hybrid of the solid-yet-eclectic sonic experiences each member brings to the band, as Beban explains. “We all come from different angles. I’ve come from playing improvised music and free jazz and that more out – there noise stuff. But I’m also really into groove music/trance music but from Morocco and things; whatever comes my way really. It’s a melding of all that stuff; not in a prescribed way, we just go with what we enjoy. For example Jeremy (Coubrough) who plays drums was Vjing at the Gathering ten, twelve years ago so he’s come from that angle as well as playing in bands. Everyone’s got different things going on. We all just mix it together like a big soup.”

When asked about their post-All Tomorrow’s Parties plans, Beban exclaims: “Funny you should ask that today! We’re just off to set up and record now. We’re going to set up our instruments and not discuss what we’re going to do; it’s going to be improvised because we’re trying to generate new songs. We’ll jam for maybe four or ﬁve hours and go back and grab the bits that were good and try and replicate them and see if we can play them again. Some of the tunes we play now we wrote a year ago but we’re only playing them well now after playing them 100 times. They’re always changing which is really fun; they never stick to the static song structure.” And while they’ll always ﬁnd time for a kids performance, Orchestra of Spheres – international releases, European tours and all – are about to exist on a whole new plane.

‘Nonagonic Now’ is out now.