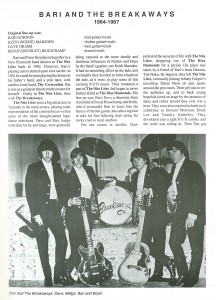 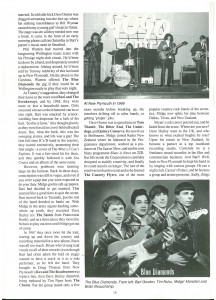 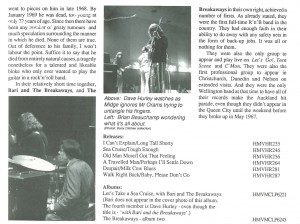 Bari and Dave first played together in a New Plymouth band known as ‘The Nite Lites’ back in 1963. However, Bari’s playing career started quite a lot earlier: in 1961 he could be seen playing the drums in his father’s band, and a year later, with another local band, ‘The Crescendos’. But it was as a guitarist that he made a name for himself – firstly in ‘The Nite Lites’, then with ‘The Breakaways’.

The Nite Lites were a big attraction in Taranaki in the early sixties, playing a fair representation of the current hits as well as some of the more straight—ahead legit. dance selections. Dave and Bari, happy with their lot by and large, were gradually being exposed to the more deadly and insidious inﬂuences of rhythm and blues by the band’s gopher, one Keith Marsden. It had an unsettling effect on the lads, and eventually they decided to form a band on the side, as it were, to play some of this exciting R’n’B music. They remained a part of ‘The Nite Lites’, but began to move further afield as ‘The Blue Diamonds’. The line-up was: Bari, Dave, a drummer from Auckland in Bryan Beauchamp, and Keith, who’d persuaded Bari to teach him the basics of rhythm guitar, thus allowing him to take his first faltering steps along the rocky road to local stardom.

For one reason or another, Dave preferred the security of life with The Nite Lites, dropping out of The Blue Diamonds for a period. His place was taken by a friend of Bari’s from Hawera, Tim Nuku. By degrees, they left The Nite Lites, eventually joining Johnny Cooper’s travelling Talent Show on epic jaunts around the provinces. Their job was to rev the audience up, and to back young hopefuls lured on stage by the promise of fame and riches should they ever win a heat. They were also required to back such celebrities as Howard Morrison, Dinah Lee and Tommy Adderley. They developed into a tight R’n’B combo, and the work was rolling in. Then Tim got married. So old side-kick Dave Orams was dragged screaming into the line-up, where his striking resemblance to Bill Wyman caused many a young girl’s heart to ﬂutter. The stage was set: all they needed now was a break. It came in the form of an early morning phone call one Saturday to Bari’s parent’s music store in Stratford.

Phil Warren had moved into the burgeoning Wellington music scene with his Prestige nightclub circuit. He’d been let down by a band, and desperately needed a replacement. Asking around, he’d been told by Tommy Adderley of this hot band up in New Plymouth. On the phone to the Gordons, Warren offered ‘The Blue Diamonds’ the gig if they could be in Wellington ready to play that very night.

At Tommy’s suggestion, they changed their name to the more mod ‘Bari and The Breakaways’, and by 1965, they were more or less a household name. Girls swooned whenever their battered van hove into sight. Bari was attacked by scissor- wielding fans desperate for a lock of his hair. ‘So this is fame,’ they thought glumly as they were forced to cower behind locked doors. But, what the heck, this was the swinging sixties, and life was a gas! The first full-time R’n’B band in the country, they toured extensively, promoting their first single – a cover of The Who’s ‘I Can’t Explain’. It was a fair-sized hit for them, and they quickly followed it with ‘Sea Cruise’ and an album of the same name.

However, problems were looming large on the horizon. Back in those days, conscription was still in vogue, and even if you were a pop star you were expected to do your duty. Midge got his call-up papers. Bari had decided to get married. This seemed like a good time to quit the scene. Bari moved back to Taranaki, but the rest of the band decided to battle on. With Midge in the army square-bashing somewhere up north, they recruited Dave Hurley (ex ‘The Saints’ from Palmerston North), and as a three-piece they moved to Nelson to play out time until Midge got out of camp.

In 1967 they once more hit the trail, touring up and down the country and recording material for a new album. But it was all too much. Bryan who’d sung lead vocals on all of their records (even though Bari had often taken the lead on stage) wanted to have a crack at it as a solo performer, so he left the band. They brought in Doug Thomas from New Plymouth’s ‘Rex and The Roadrunners’ to replace him, then Dave Hurley departed, being replaced by Tim Piper from ‘The Chants’. But the group lasted only a few more months before breaking up, the members drifting off to other bands, or getting ‘proper’ jobs.

Dave Orams was to spend time in ‘Tom Thumb’, ‘The Bitter End’, ‘The Underdogs’, and ‘Quincy Conserve’. He now lives in Melbourne. Midge joined Radio New Zealand where he laboured in the Programmes department, worked as a producer on The Sunset Show, and ran his own blues programme ‘Blues is News’ on 2ZB. But life inside the Corporation is carefully designed to stultify creativity, and finally he could stand it no longer. The lure of the road was too hard to resist and so he formed ‘The Country Flyers’, one of the more popular country-rock bands of the seventies. Midge now splits his time between Dallas, Texas, and New Zealand.

Bryan’s solo career petered out, and he faded from the scene. Where are you now? Dave Hurley went to the UK, and who knows to what exalted heights he rose? Upon his return to New Zealand, he became a partner in a top Auckland recording studio. Currently he is a freelance sound recordist in the film and commercials business. And Bari? Well, back in New Plymouth he kept his hand in by singing with various groups. He ran a night club, Caesar’s Palace, and he became a group and artiste promoter. Sadly, things went to pieces on him in late 1968. By January 1969 he was dead, too young at only 22 years of age. Since then there have been any number of grisly rumours and much speculation surrounding the manner in which he died. None of them are true. Out of deference to his family, I won’t labour the point. Suffice it to say that he died from entirely natural causes, a tragedy nonetheless for a talented and likeable bloke who only ever wanted to play the guitar in a rock’n’roll band.

In their relatively short time together, ‘Bari and The Breakaways’, and ‘The Breakaways’ in their own right, achieved a number of firsts. As already stated, they were the first full-time R’n’B band in the country. They had enough faith in their ability to do away with any safety nets in the form of back-up jobs. It was all or nothing for them. They were also the only group to appear and play live on Let’s G0, Teen Scene and C’Mon. They were also the first professional group to appear in Christchurch, Dunedin and Nelson on extended visits. And they were the only Wellington band at that time to have all of their records make the Auckland hit parade, even though they didn’t appear in the Queen City until the weekend before they broke up in May 1967.

Albums:
Let’s Take a Sea Cruise, with Bari and The Breakaways HMVMCLP6221
(Bari does not appear in the cover photo of this album. The fourth member is Dave Hurley – even though the title is – ‘with Bari and the Breakaways’.)

For more information on ‘Bari & The Breakaways’ check out their Audioculture profile here.

Grateful acknowledgment to Roger Watkins for allowing us to use this material from his book When rock got rolling : the Wellington scene, 1958-1970.