Thundercat @ San Fran, warmed by DJ Thanks & supported by Orchestra of Spheres 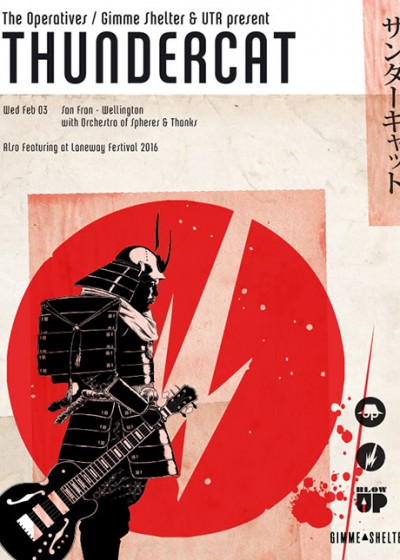 What a wonderful night we all had on the 3rd of Feb. Wellington gave us its hottest (and dampest!) night ever, allowing us all to rock up San Fran in tees and flip flops.

Christchurch & Melbourne based DJ Thanks stood comfortably between the bar and the sound man, grooving funk, soul, hip hop, with the right amount of electronics… a perfect warm up for the opening act; the galactic quartet of Orchestra of Spheres. The environment was buzzy and exciting while the beats invited us to settle in for an explosive night.

As the DJ’s faders went down, people turned off their ciggies, sculled their drinks, and made it to the dance floor without further ado, where the heavy analogue bass and mesmeric beats were matched with the sounds of the most psychedelic home made guitar in town, mixed with washed reverberated vocals of men and women from other lands. The crowd went straight to the dancing given that the tunes coming out were well known to most of us. For those experiencing the otherworldly vibrations for the first time, the thick spider web would have made it impossible to escape the twitching. Some people sat quietly just nodding; those would have been part of the OOS crew in one way or the other; rodies, friends, music colleagues.

The temperature was rising, and the sweaty arms, backs and armpits started to make their presence be felt. The stage would have been at least 5 degrees on top of that, but nevertheless, the Speheres were owned the performance – fully suited and all.

After a space of time which felt hard to calculate, that was it. We were served with prime quality weird-astro-synth-rock, and people were almost feeling the flavors of the main dish of the night. Being in the front, I left my friend and told him I’d be back as soon as I was done with a bit of a refresher outside.

Big mistake! No sooner I found myself surrounded by friends from the NZSM, Jazz School and general gig-goers, a low hum made us all turn our heads in surprise… and there was Stephen ‘Thundercat’ Burner with his 6-string Ibanez bass guitar standing up on stage. A flock followed, with a mix of gentles and desperate excuse me‘s. I sneaked like a mongoose and managed to get the lateral autobahn till I was two-dudes-away from my partner (who was right at the front). I scored one of those sweet spots: a girl behind me, 2 human pillars by my side, and a perfectly short-haired, petite and gentle guy in front; this allowed a director’s shot of those beautiful black hands casting their magic, both on the frets and on the strings.

The stage was shared with a monumental duo: Justin Brown on the drums, and Dennis Hamm on keyboards. After a couple of songs things got really heated, with solos from all parties, making people in the audience go wild.

After culminating their set (dehydrating us all!), I witnessed the most energetic encore call yet to be seen in Wellington. With a big and humble smile, they all came back after no more than 20 seconds, and played another 2 or 3 tunes before the final bang.

This being Wellington, I had the chance to talk to DJ Thanks, say hi to Baba Rossa, and share the admiration for To Pimp a Butterfly (which features Thundercat on bass in several songs) with Dennis Hamm. He told me it’s been nominated for 13 Grammy’. Not too bad!

Stepping out of the venue, I slowly walked back home via Cuba Street, in ecstasy and contemplation. Thank you Welly for the music that you let us breathe!