As a young man Hemi Parai joined with Mohi Ngaponga in leading a group of their people to settle in Te Whanganui-a-Tara, firstly at Ngauranga and then at Te Aro. At the gathering on Matiu/Somes Island in 1835, before the departure of the Ngati Mutunga and Ngati Tama for the Chatham Islands, Patukawenga awarded specific areas around the harbour to local iwi. Mohi Ngaponga was awarded the area of Te Aro between Kumutoto and Waitangi streams and Paekawakawa.

Hemi Parai was a very active correspondent, as shown in his writings to Governor Grey or his officials concerning Maori land. References to these writings may be traced in Land Court Minute Books, AtoJsonline, Donald McLean papers, and ATL manuscripts. (see below)

Hemi Parai signed the Deeds of Release at Te Aro in 1844 and in September 1847 he was appointed a native land assessor just before the first of the McCleverty awards were signed. His signature appears on a number of leases relating to Tenths land on behalf of others but he also appeared to have unique rights. In 1863 he was one of 3 remaining signatories, still living in Wellington, to have land granted 'to the Te Aro Natives' (Ngati Ruanui and Taranaki) at Porirua. Some who had signed as Te Aro Natives, had since died and the rest now lived in Taranaki. In 1873, Hemi sold Te Aro pa Sections 1, 2, 7 (24 perches) to the Superintendent of Wellington, and with Hori Ngapaka also sold Section 8 (20 perches).On 17 August 1875, Sections 120 and 121 Hutt Valley (197 acres) were proclaimed a native reserve and a Crown Grant was issued to Hemi Parai who in turn assigned the land - now parcelled into 12 blocks, to his people. The land had been let to Hemi Parai and others on the understanding that as soon as the amount of rent paid by them into the Treasury equalled the purchase money, the land should become absolutely theirs. (G3, 1876).

The two children of Hemi Parai and Tawhirikura were: Tahana Niwa, (who died before 1878, and left no children), and Arapera Rongouaroa whose husband was William Ellerslie Wallace. For a time, Arapera and William lived at Ngauranga in a house owned by Manihera Te Toru, and William Wallace ran a coaching hotel. Arapera succeeded to Pakuahi's interest in Lot 8, Te Aro Pa because "she was his nearest young relative". Arapera was also one of many signatories to the Taranaki Deed of Sale no 27, Moa-Whakangerengere-Whakaahurangi no. 2, Block, Puketapu District.

Their son, Taare Warahi (Charles Wallace) who was born 1848 at Ngauranga, later lived at Johnsonville. His land holdings included sections at Wiremutaone, Otaki, Hawera, Opunake and Polhill Gully. Charles Wallace died 1932 at the age of 84 years and was survived by his wife Margaret (nee O'Toole) and six of their thirteen children: Ella Simeon, Doris Julia O'Connor, Hannah Bramley, Isabel Wallace, James Wallace and Cyril Wallace, with a remaining share of the estate going to the children of William Wallace (jnr) (deceased).

The children of Pirihira Matangi and her first husband Wi Kingi Te Awhitu were Hana Te Awhitu (who married Tamati Te Wera), Ani Te Kai (Bluett) (whose daughter was Ani Waka Bluett - Durling) and Te Waaka Houtipu. Ani Durling was survived by seven children, each of who owned a block of land in Johnsonville. The youngest child was Faith Margaret Durling. Te Waaka Houtipu and his first wife had two children - Hare Waka (who died young) and Parehira Kare. He and his second wife (Hana Waitara) had no children.

Agnes - Mrs Simeon, was the daughter of Rawinia Te Rangikawawe and James McAlpine and was closely related to Te Aro elders such as Mohi Ngaponga, Te Teira Whatakore, and possibly Hemi Parai. She was also related to Te Whiti o Rongomai, Tohu Kakahi and Wi Tako Ngatata. In the Section 8, Block 11 land at Johnsonville, Agnes and Frederick Simeon left each of their ten children a section.

We've collected a number of resources below, but DigitalNZ is the search site for all things New Zealand and a great resource for research — have a browse!

On the library site

By Edward Smallwood Richards. From the collection of Mrs A.D. Kerr. Photographs of Wellington and Hemi Parai. 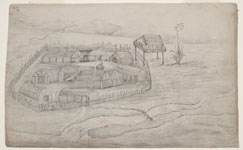 Shows a fenced area with nine dwelling houses and a food-storage house. A single large flax is to the right of the buildings, outside the palisade. A stream flows across the view from right to left, emptying into the harbour in front of the pa. 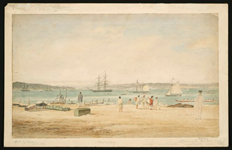 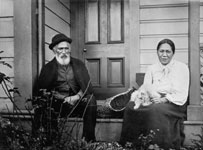 After Te Awhitu's death, Hana's mother Pirihia married Hemi Parai. This is a photo of Hana and her husband Wiremu Tamati Te Wera, at their home in Ohiro Road, Brooklyn, Wellington around 1900.

Agnes was christened Agnes Flora McAlpine, but amongst her people she was known by her tribal ancestral name Kurakitoro. Akanihi married Frederick Simeon in Wanganui 1866 and after spending time in Napier they settled in Wellington in 1972. Akanihi is recorded as being "the only woman that came from Taranaki residing in Te Aro pa" as of the mid to late 1870s. She was related to many of the Te Aro elders such as Mohi Ngaponga and probably Hemi Parai. 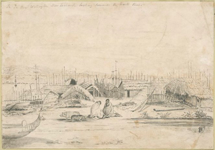 Shows Maori with pigs in the foreground and a carved canoe prow, dwellings and other buildings of the pa, the palisade, the harbour and ships in the background. 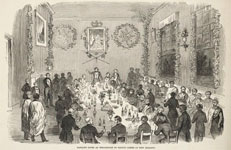 The event took place on 17 April 1849 in the house of Dr Fitzgerald, next-door to the hospital according to an article in the Wellington Independent, 25 April 1849, p. 3. Dr Fitzgerald was in the chair, with Mr Henry St Hill as vice-chair. Octavius Hadfield was also present, along with Te Puni, Wi Tako and a large group of other Maori men, including Hemi, all listed in the article. 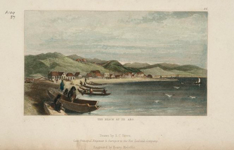 The beach at Te Aro — view looking along the beach from the Te Aro Pa area - with Maori canoes in the foreground, towards Clay Point, surmounted by Charles Heaphy's house, with shops at beach level, including those of Mrssrs Sutton Lyon, Boulcott, and [William Ellerslie] Wallace.

The images you see in the gallery are displayed with the generous permission of a number of institutions. Click through for a larger version of each image and a link to the source online.

Please do not copy them without following their conditions of use.

A to Js Online

The Appendix to the Journals of the House of Representatives (AJHR), sometimes known as "the A to Js", is a collection of government-related reports published every year from 1858.

The AJHR is one of the most valuable tools for understanding how New Zealand has developed from its earliest colonial beginnings to the present. It provides a wealth of information for researchers working across many fields.

These letters are from the Donald McLean Papers, and are pertaining to land issues.