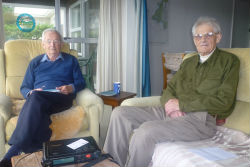 Ron and Jim Thornton are grandsons of Thornton's Confectionary founder, George Henry Thornton, and have vivid memories of when the business was run by their father until its closure in 1948. Listen below to an oral history interview conducted with Ron and Jim in September 2010 where they describe their remarkable link with one of Wellington's pioneering 19th Century retail and manufacturing firms.

For generations of young Wellingtonians, one shop in the city stood above all others: Thornton's Confectionary based in Manners Street was Wellington's best known and loved manufacturing confectioner. In an era before processed snack foods or pre-packed sweets and chocolate bars, Thornton's supplied a huge variety of sugary treats to Wellington's citizens for nearly 70 years. Established in 1879 by George Henry Thornton at 43 Manners Street, the business was taken over by his son Charles James in 1901 following the death of his father. Soon after the shop and factory relocated to 64 Manners Street (today the site of the McDonald's restaurant). Before the arrival of supermarkets in the late 1950s changed food retailing forever, Thornton's was often the first stop for buying a gift for friends, family or a prospective lover. As one would expect, the popularity of the shop surged leading up to Easter and Christmas.

Christmas decorations preceding the big day were mostly flags, bunting, and coloured paper. A few of the larger buildings would be illuminated... grandest show of all was Thornton's in Manners Street. Their window would be filled with red and white sugar, in the centre a monster Santa Claus ornamented with yards of white wool (snow), and surrounded by many coloured animals, mostly pigs, and massive lolly walking sticks.(1.)

The shop was also famous for its "pull" - a simple slot machine which had legendary status among children.

Some of the folk of Wellington of thirty years ago will remember this "Pull" at the little sweet shop along Manners Street way. How with trembling hand you invested your penny in this lolly totalisator and received from the counter beyond, your dividend according to the prize gained. In those days this sweet shop was the children's rendezvous of Wellington. Apart from the manifold attractions of the window, there was one special shelf well to the front. In this were twelve items and at number seven, as imposing as Mount Victoria, stood some grand box or bag of sweets. This was the magic number - Number seven!

Inside the shop, fronting the door, but slightly to the left, stood The Pull. A plain metal contrivance, a head taller than the tallest boy or girl investor. Into a slot in the centre of the machine you pushed your warm penny. Then you pulled at a brass handle, and out would come, on the hand of the very Pull itself a wooden disc. On this disc was a number, mostly number one. Sometimes another number, rarely number seven. It was on the remote chance of number seven that we gambled.

And then it appeared! As quick almost as by a broadcasting service today, the word would flash to every school. John Smith of Tory Street had drawn number seven! John was the Lolly King of the day and all who knew him did him homage.(2.)