What will I find on this page?

Wondering about the local history of Newtown or Berhampore? On this page we aim to collect relevant library resources and interesting local history websites about Newtown and Berhampore, as well as highlight notable persons and organisations long established in Newtown that have a strong community link.

This is simply 'New town' - one of Wellington's first outlying suburbs.

Berhampore was named after a place in Bengal. Local landowner George Hunter married the daughter of Major Paul, an ex-Indian Army officer, and used this name for his holding in honour of his father-in-law. Many of the streets in this suburb were also then given Indian names. 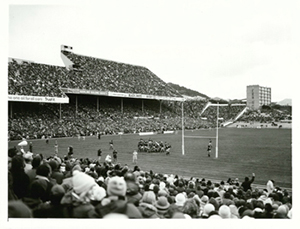 Athletic Park "opened for sport" on 6 April, 1896. The final match at the ground was on Sunday 10 October 1999. A crowd of 30,000 was at the Wellington Lions v. Otago match to farewell The Park. The rugby ground was demolished in 2000 and is now the site of a retirement village.

Located in Riddiford St, Newtown, Wellington Hospital was built on its current site in 1878. It has just finished a phase of expansion and renovation.

Newtown Park, located in Manchester St., Newtown, is a natural amphitheatre. It includes a sports stadium with an athletic track - it's the home of Wellington's athletics - and has a soccer ground above it. You'll find it next to the Zoo on Wellington's green belt.

The New Zealand Film Archive's oldest piece of New Zealand film is believed to have been filmed at Newtown Park - The Departure of the Second Contingent for the Boer War (you can watch online). View an image of Newtown Park Military Camp, 1900, via NZHistory.net.

Government House is located in Dufferin St., Newtown. A Tudor-style house built between 1908 and 1910; Lord Islington was the first Governor to live in it. It was designed by the Government Architect of the time, John Campbell, but his assistant, Claude Paton, did most of the work on it. Government House is a large, two-storied house built of wood. It has a ballroom, grand staircase and dozens of rooms which are used for entertaining special visitors. The Governor-General lives in about one-third of the house. This property has wonderful gardens and grounds. The grounds were once the site of the former Mount View Asylum.

Truby King House and Garden is a 1.9 hectare heritage-listed estate in Melrose. The estate was once home to Sir Truby and Lady Isabella King - founders of the Plunket Society. The Truby King Mausoleum is also located in the garden. 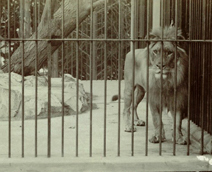 Wellington Zoo was founded in April 1906 when a young lion named 'King Dick' (after Prime Minister Richard Seddon) was presented to Wellington City by the Bostok and Wombwell Circus. It is the oldest zoo in New Zealand and the third oldest in Australasia. It houses a variety of animals from New Zealand and overseas, including red pandas and tuataras. The Explore Wellington - Southern Walkway guides you along part of the Town Belt from the Botanic Garden, through parts of historic Aro Valley, Newtown, Berhampore and Island Bay.

(Please note, this list does not include people who are still alive.)

Born in New Zealand in 1858, Frederic Truby King won the Eccles Scholarship for medicine at Edinburgh University, and started The Plunket Society in 1907. Truby King has touched the lives of most New Zealanders - as founder of the Plunket movement, that led our mothers and grandmothers into military-style baby management, his influence is enormous. Although his extreme and restrictive views about women would be ridiculed today, he gave them a health regime that dramatically reduced child mortality and was the envy of the world.

For more notable people from Newtown, visit The Dictionary of New Zealand Biography.

The images below have been sourced from Wellington City Libraries' Postcard Collection, and the National Library's Flickr Commons photostream. Click for a larger version.

Here are some electronic resources to help you in researching Newtown's history:

This page is written and maintained by our Local History Librarian, Gabor Toth. Our aim is to collect in one place useful sites and library resources for discovering historical content about Newtown & Berhampore. We'd be pleased to hear from you about this page - you can email us with any feedback.