We’re now in the middle of Ace Week! Ace Week is an annual week to celebrate and highlight asexuality and all asexual-spectrum identities. So let’s celebrate all you Aces out there!

If you’re wondering what asexuality is, aces & aros has a pretty good introduction to asexuality and aromanticism. Awareness is important, and knowledge is a powerful thing!

Or if you’re after something more local… As part of their More Than Four campaign, InsideOUT created a series of videos that feature and explore the wide range of identities within our rainbow community. Check out their Asexual/Aromantic video below!

And since we’re a library, I couldn’t end this post without giving you some reading recommendations from our collection! Here are some books that feature asexual characters, or asexual authors!

Ace : what asexuality reveals about desire, society, and the meaning of sex / Chen, Angela
“Ace” delves into the lives of those who identify using the little-known sexual orientation of asexuality and shows what all of us can learn–about desire, identity, culture, and relationships–when we use an asexual lens to see the world”– Provided by publisher.” (Catalogue)

Rick / Gino, Alex
“Eleven-year-old Rick Ramsey has generally gone along with everybody, just not making waves, even though he is increasingly uncomfortable with his father’s jokes about girls, and his best friend’s explicit talk about sex; but now in middle school he discovers the Rainbow Spectrum club, where kids of many genders and identities can express themselves–and maybe among them he can find new friends and discover his own identity, which may just be to opt out of sex altogether.” (Catalogue) 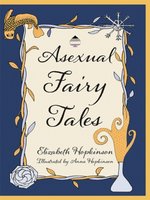 Gender queer : a memoir / Kobabe, Maia
“In 2014, Maia Kobabe, who uses e/em/eir pronouns, thought that a comic of reading statistics would be the last autobiographical comic e would ever write. At the time, it was the only thing e felt comfortable with strangers knowing about em. Now, Gender Queer is here. Maia’s intensely cathartic autobiography charts eir journey of self-identity, which includes the mortification and confusion of adolescent crushes, grappling with how to come out to family and society, bonding with friends over erotic gay fanfiction, and facing the trauma and fundamental violation of pap smears. Started as a way to explain to eir family what it means to be nonbinary and asexual, Gender Queer is more than a personal story: it is a useful and touching guide on gender identity – what it means and how to think about it – for advocates, friends, and humans everywhere.”–Amazon.” (Catalogue)

Elatsoe / Little Badger, Darcie
“Imagine an America very similar to our own. It’s got homework, best friends, and pistachio ice cream. There are some differences. This America has been shaped dramatically by the magic, monsters, knowledge, and legends of its peoples, those Indigenous and those not. Some of these forces are charmingly everyday, like the ability to make an orb of light appear or travel across the world through rings of fungi. But other forces are less charming and should never see the light of day. Seventeen-year-old Elatsoe (“Ellie” for short) lives in this slightly stranger America. She can raise the ghosts of dead animals, a skill passed down through generations of her Lipan Apache family. Her beloved cousin has just been murdered, in a town that wants no prying eyes. But she is going to do more than pry. The picture-perfect façade of Willowbee masks gruesome secrets, and she will rely on her wits, skills, and friends to tear off the mask and protect her family” — Publisher’s description.” (Catalogue)

Every heart a doorway / McGuire, Seanan
“Children have always disappeared from Eleanor West’s Home for Wayward Children under the right conditions; slipping through the shadows under a bed or at the back of a wardrobe, tumbling down rabbit holes and into old wells, and emerging somewhere … else. But magical lands have little need for used-up miracle children. Nancy tumbled once, but now she’s back. The things she’s experienced … they change a person. The children under Miss West’s care understand all too well. And each of them is seeking a way back to their own fantasy world. But Nancy’s arrival marks a change at the Home. There’s a darkness just around each corner, and when tragedy strikes, it’s up to Nancy and her new-found schoolmates to get to the heart of the matter. No matter the cost.” (Catalogue)