Welcome to the Wellington Comic Lover’s (WCL) Guide, where we take you through the Wellington City Libraries’ collection of a comic book character. This post is about the king and protector of the unconquered city of Wakanda, the Black Panther!

Who is the Black Panther?

The Black Panther is a ceremonial title bestowed upon the head of the royal family line of Wakanda, a technologically advanced nation in central Africa that has remained uncolonized and is known for its store of the rare energy-absorbing metal Vibranium. After the death of King T’Chaka, the role falls to his son T’Challa, a stoic and studious young prince. Empowered by a suit of Vibranium and a heart-shaped herb that increases his strength and speed, T’Challa now defends his nation and the world as the Black Panther.

In the years before Marvel NOW!, T’Challa married Storm of the X-Men, lead the Fantastic Four, and briefly became protector of Hell’s Kitchen in Daredevil’s absence.

New Avengers – Working with the Enemy

T’Challa discovers that Incursions (universes colliding into each other) are slowly destroying the multiverse, and he gathers the Illuminati to find a way to prevent them. However, this means working with Namor, an enemy of Wakanda since he destroyed their capital city with a tidal wave in an act of war. Jonathan Hickman’s New Avengers series (and its finale Secret Wars) explores the enmity between the two kings and how far each is willing to go to protect their nations (and to spite each other).

Taking place after Secret Wars, this long-running and critically acclaimed series was written by Ta-Nehisi Coates, former columnist for The Atlantic and author of Between the World and Me. Here, T’Challa faces a populist uprising in Wakanda, meets the old gods that he draws power from, and comes into conflict with a universe where Wakanda became a galaxy-spanning empire.

Black Panther : a nation under our feet. Book one / Coates, Ta-Nehisi (also on Libby)

The World of Wakanda

Coates’ run had a number of spin-off series exploring the nation of Wakanda and its citizens and history, written by such famous Black writers as Roxane Gay, Yona Harvey, and Nnedi Okorafor.

Black Panther and the Agents of Wakanda. Vol. 1, Eye of the storm / Zubkavich, Jim 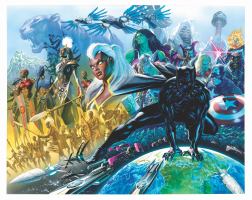 The current run on Black Panther is written by John Ridley (screenwriter for 12 Years a Slave and writer of I Am Batman). Fresh from returning from his travels in space, T’Challa receives an unexpected and urgent message from a Wakandan secret agent. Now the Black Panther must race the clock not only to save his agent, but also to keep his true agenda under wraps.

Shuri is T’Challa’s younger sister, and next in line for the Wakandan throne. A sorceress and an accomplished scientist, she occasionally has to take over for T’Challa as ruler of Wakanda in his absence. She even became the Black Panther for a time in the late 2000s.

Black Panther : the deadliest of the species / Hudlin, Reginald

Into the heartlands / Brown, Roseanne A

Black Panther has been a member of the Avengers, the Ultimates, and briefly lead The Crew, a team of Black and indigenous heroes that fight systemic injustice.

Black Panther & the Crew : we are the streets / Coates, Ta-Nehisi

The Ultimates [1] : start with the impossible / Ewing, Al

A Call to Adventure: Summer Reading is Almost Here