In Books, Comics and Graphic Novels, stuff to read

Welcome to the Wellington Comic Lover’s (WCL) Guide, where we take you through the Wellington City Libraries’ collection of a comic book character. This post focuses on Marvel’s Jade Giantess, the Sensational She-Hulk!

After receiving a blood transfusion from her cousin Bruce Banner, aka The Incredible Hulk, lawyer Jennifer Walters finds that she can turn into a super-strong green version of herself at will. Now she fights for justice in and out of court as the Sensational She-Hulk. Unlike her cousin, Jennifer quickly gained control over her transformation, and spends more time in her She-Hulk state than not.

The John Byrne series is one of the definitive She-Hulk series, examining the unexplored legal areas of superheroics and giving Jen a healthy sense of humour as she struggles to balance her two jobs (even breaking the fourth wall to call out the artist drawing her!)

In this mid-2000s run by Amazing Spider-Man writer Dan Slott, She-Hulk begins working for a law firm that defends both superheroes and supervillains. Along the way, she gets arrested by the Time Variance Authority, defends superheroes during the Superhuman Civil War, and settles down with the son of J. Jonah Jameson. 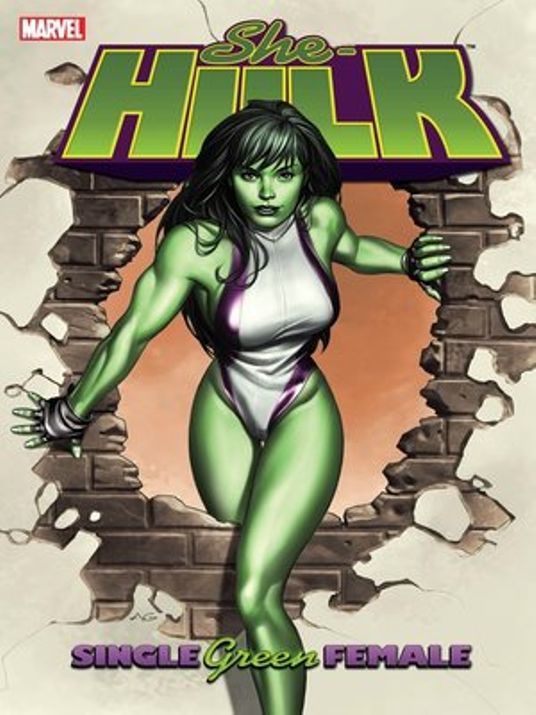 Written by actual lawyer Charles Soule and drawn by Javier Pulido, the Marvel NOW! She-Hulk series is a great introduction to the character, with notable arcs such as helping Doctor Doom’s son with immigration law and going up against other notable superhero lawyer Daredevil. Later, her series rebooted following Civil War II, with writer Mariko Tamaki (Skim, Wonder Woman) and artist Nico Leon introducing a new She-Hulk transformation powered by her grief.

The Charles Soule run is also collected in one volume as She-Hulk : the complete collection.

She-Hulk has been on multiple teams in the Marvel Universe, including the Fantastic Four and their spin-off team Future Foundation, the all-female team A-Force, and the Avengers.

She-Hulk makes regular appearances in her cousin’s series as well, being a supporting character during the Greg Pak run, and also appearing in the recent Immortal Hulk series, which entertains possibility of whether she’s immortal as a result of her gamma-related powers.

Did you know there was also a RED She-Hulk? Betty Ross-Banner (Bruce Banner’s wife) was turned into a red version of She-Hulk via a machine developed by her father and MODOK, and later became an Agent of SHIELD. In Immortal Hulk, she gains a new transformation called the Red Harpy, giving her wings and talons in addition to her red complexion.

From the Vaults VIII: The Stack