In Anime and Manga, Books, Librarian's Choice, stuff to read

If you’ve trod the hallowed halls of our gorgeous Newtown Library recently, you may have noticed that she’s had a bit of a glow-up of late. The YA section has moved to a fetching and airy new location affording panoramic views of bustling Constable St, and its shelves are now bedecked with a plethora of new manga series freshly plucked from our collection warehouse and brought forth to the good people of Newtown for your edification and enjoyment. 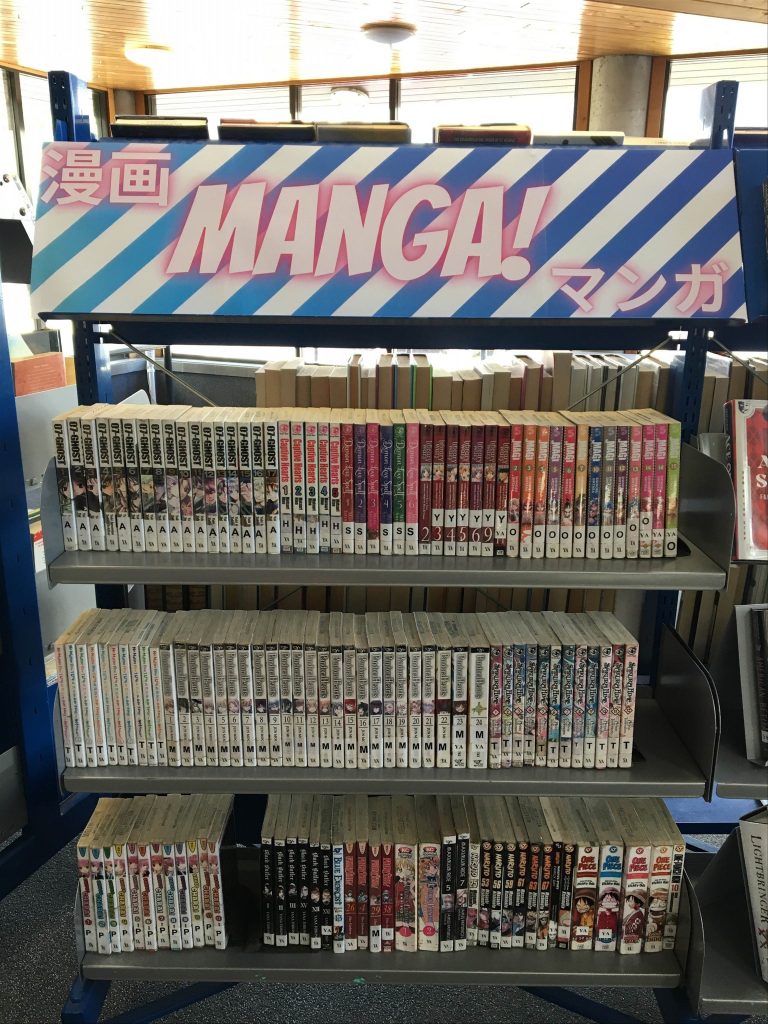 Ooh! Aah! So pretty! So many new books to explore!

There’s plenty here to satisfy readers new to the form as well as the seasoned panel-decipherers among you — and don’t forget you can check out the entire WCL manga collection here so you can reserve to your heart’s content. Also, if manga’s kinda your thing, we blog about it pretty often around these parts — check out some of our other posts here.

Anyway, here are the first volumes of some of the manga series you can expect to find on the shelves at Newtown on your next visit:

07-Ghost. Volume 1 / Amemiya, Yuki
“Teito Klein wants to forget his murky past as an orphan and slave and to graduate from Barsburg’s military academy with his best friend Mikage. But when an overheard state secret triggers treasonous memories, he’s forced to flee from the very empire he once sought to defend! Deliberately leaving Mikage behind, Teito escapes to the Barsburg Church. There, with the help of its three bishops, he begins to unravel his role in the story of an evil god, seven ghosts, two rival empires, and his own mysterious past.” (Catalogue)

Children of the sea. 1 / Igarashi, Daisuke
“When Ruka was younger, she saw a ghost in the water at the aquarium where her dad works. Now she feels drawn toward the aquarium and the two mysterious boys she meets there, Umi and Sora. They were raised by dugongs and hear the same strange calls from the sea that she does. Ruka’s dad and the other adults who work at the aquarium are only distantly aware of what the children are experiencing as they get caught up in the mystery of the worldwide disappearance of the ocean’s fish.” (Catalogue)

Magi : the labyrinth of magic. 1 / Ōtaka, Shinobu
“Inspired by One thousand and one nights, Aladdin, together with Ugo and Alibaba, searches in the desert for the mysterious Dungeons and their riches.” (Catalogue)

No matter how I look at it, it’s you guys’ fault I’m not popular! 1 / Tanigawa, Nico
“Tomoko Kuroki naturally assumed she’d be popular when she got to high school…but then cold, hard reality swooped in for the attack. Turns out all the popularity points she’s racked up in her video game dating sims are worth squat in real life, and Tomoko’s far from prepared to navigate high school. How can she possibly hope to impress her classmates when she can’t even talk to them? A new high-school heroine is born (maybe?).” (Catalogue)

Pandora hearts. Vol. 1 / Mochizuki, Jun
“The air of celebration surrounding fifteen-year-old Oz Vessalius’s coming-of-age ceremony quickly turns to horror when he is condemned for a sin about which he knows nothing. Thrown into the Abyss–an eternal prison from which there is no escape–Oz meets a young girl named Alice, who is not what she seems. Now that the relentless cogs of fate have begun to turn, will they lead only to crushing despair for Oz, or will Alice provide him with some shred of hope?” (Catalogue)

Sakura Hime : the legend of Princess Sakura. 1 / Tanemura, Arina
“Princess Sakura has been engaged to Prince Oura since birth. Wanting to escape a life arranged by others, Sakura runs away and finds she’s caught up to her true destiny. She is the granddaughter of a mysterious moon princess who slew demons with her Blood Cherry Blossom sword. All her life Sakura has been forbidden to look at the full moon without knowing why. Then one night, she gazes up at the moon, only to see a demon attacking her…” (Catalogue)

Shugo Chara! 1, Who do you want to be? / Peach-Pit
“Everybody at Seiyo Elementary thinks that stylish and super cool Amu has it all: But nobody knows the real Amu, a shy girl who wishes she had the courage to truly be herself. Changing Amu’s life is going to take more than wishes and dreams-it’s going to take a little magic! One morning, Amu finds a surprise in her bed: three strange little eggs. Each egg contains a Guardian Character, an angel-like being who can give her the power to be someone new. With the help of her Guardian Characters, Amu is about to discover that her true self is even more amazing than she ever dreamed. This volume of Shugo Chara! includes special extras after the story!” (Catalogue)

Library wars : love & war. 1 / Yumi, Kiiro
“In the near future, the federal government creates a committee to rid society of books it deems unsuitable. The libraries vow to protect their collections, and with the help of local governments, form a military group to defend themselves – the Library Forces! Iku Kasahara has dreamed of joining the Library Defense Force ever since one of its soldiers stepped in to protect her favorite book from being confiscated in a bookstore when she was younger. But now that she’s finally a recruit, she’s finding her dream job to be a bit of a nightmare. Especially since her hard-hearted drill instructor seems to have it in for her!” (Catalogue)

Demon love spell. 1 / Shinjō, Mayu
“Miko is a shrine maiden who has never had much success at seeing or banishing spirits. Then she meets Kagura, a sexy demon who feeds off women’s feelings of passion and love. Kagura’s insatiable appetite has left many girls at school brokenhearted, so Miko casts a spell to seal his powers. Surprisingly the spell works sort of but now Kagura is after her!” (Catalogue)

Captive hearts. Vol. 1 / Hino, Matsuri
“Carefree Megumi Kuroishi was living a life of luxury until the day a girl named Suzuka Kogami walked into his life. All of a sudden, Meguni finds himself kneeling at suzuka’s feet and prostrating himself like a servant! What Megumi doesn’t know (until that very moment anyway) is that his family is cursed to follow the orders of the Kogami family. Being carried around everwhere and having handsome Megumi act like a slave may seem ideal, but Suzuka just wishes he would stop. Can anything be done about Megumi’s captive state? Or is Megumi doomed to see Suzuka as his master…forever?”” (Catalogue)

Cool things to make during a study break

Activism to Keep the Summer Ennui at Bay!