In Pencil it in your diaries, poetry, stuff to write, Wellington

Well folks, that’s it — submissions to Tūhono 2021, our poetry journal for the kids and teens of Wellington, are now closed. We’ve received well over 200 poems this time around, all of which are going to be included in the final publication.

At this very moment, our hard-working editorial team is hard at work formatting, proof-reading, and adding all of your poems into our design templates. If we say so ourselves, we’ve chosen a particularly fetching colour scheme this year, and we’re pretty jazzed with how it’s all looking.

We’re also excited to let you know that this year we are actually producing not one, but two volumes of Tūhono. One will be for the kids, and feature poems written by people aged 5-12. The other will be for teens, and will feature the poems written by you lot, poets aged 13-18. That’s right! No longer will your meticulously-thought-out rumination on the nature of life, death, and the chaos in between be forced to rub shoulders with the sunny-faced and uncomplicated acrostic poems of the 8-year-olds of Wellington. Not that there’s anything wrong with a good acrostic poem! But we think it makes sense to do a bit more sorting this time around so the poems of generally more mature themes can stick together. We hope you enjoy this change!

Nothing to do now but wait for the journal to be out, hopefully some time in mid-late December this year. In the meantime, have you read the O.G. Tūhono 2020? If not, pick up your copy today, online or in-person! 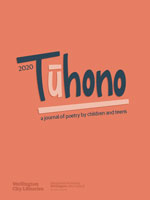 Tūhono. a journal of poetry by children and teens / 2020
“Tūhono : connection. This is the theme that binds together all 197 poems you are about to read, which were contributed by young Wellington writers aged 5-18 and collected by Wellington City Libraries throughout the month of November 2020. The year 2020 was challenging for many people. Some had to spend time apart from their friends and the people they love. Some had to find ways to live with uncertainty and the sense that everything might not be okay in the world. But taken together, these poems represent a constellation of thoughts, ideas, worries, anxieties, hopes, loves, and dreams about how we find ways to connect, even in the face of adversity.” (Catalogue)

Last Chance to Submit to Tūhono!

Cool things to make during a study break