Looms, flags, and a lot of (queer) yarn

In Crafts, Isn't that cool?, LGBTQ+, Maiph, stuff to do

If you’ve visited Johnsonville Library recently then hopefully you’ll know that we have a space downstairs that’s packed with all kinds of exciting stuff. It’s called Tūhura/The HIVE, and it’s a makerspace full of tech and toys, lasers and Lego, robots and recording equipment, and, most excitingly (or so I think, but I may be biased), a loom!

Since we opened the new Johnsonville Library we’ve tried to keep the loom warped up so anyone can come in and try their hand at weaving a few rows. We’ve had almost everyone, local Johnsonvillians, a Paralympian, even the WCC Chief Executive, come in and have a go. And just last week I took the latest scarf off the loom and tied up the ends in tassels. 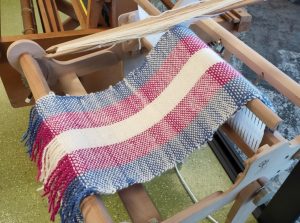 Isn’t it beautiful? Admittedly, we did strategically fold it to only show the neatest end of the weaving, but it’s still beautiful when unfolded and laid out. Look at those warped stripes! The lovely colours! Wait a minute, those colours look familiar. Could that be the Transgender Pride Flag? 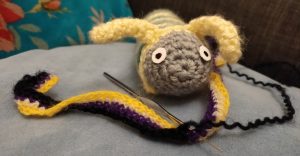 And that’s not all! Claude, our favourite crocheted caterpillar, was so inspired after seeing this scarf come off the loom that they decided to crochet a creative scarf of their own. Is that colourful close-to-completed scarf there another Pride Flag? Of course! It’s the Non-binary Pride Flag.

When we warp up the loom (attach the vertical threads to the loom. There are two yarn components you use when weaving. The warp goes up and down. The weft goes from the weft to the wight. Yes, I know that’s bad), we get to choose what pattern we put on. And if we want to show our support for trans people then we will damn well do that! And write a blog post about it too.

Now, I hope that this particularly excellent scarf shows you that knitting, weaving, crocheting – fibrecraft in general – is pretty cool. And there are so many cool things you can do! There are more things to create than these (undeniably amazing) scarves. Crochet your own Claude! Knit a political hat! There are so many free patterns available online, not to mention the books available through your local library. You could try your hand at some Subversive Cross Stitch, or create yourself some Literary Knits. Literary crocheting is also available.

OR you could get into something a bit bigger and a bit more public. Have you ever heard of yarn bombing? If you haven’t, then you are in for a treat! Yarn bombing, guerrilla knitting, knitted graffiti, whatever you want to call it, is when you create a carefully crafted cover for something out in public. It could be for a pipe, a tree, a statue, or whatever you feel would benefit from a bit of beautification. We’ve got a few books about yarn bombing, or you could just wander around Wellington and keep an eye out for artfully decorated bollards and poles. 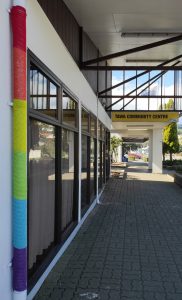 There’s a particularly fine example of yarn-bombing outside the Tawa Community Centre, just around the corner from the Mervyn Kemp (Tawa) Library. Yes it’s a rainbow. Did you really think I would let go of the queer thread weaving this post together?

Speaking of queer threads, that wonderfully proud scarf that you may remember is now on display in the HIVE at Johnsonville Library. And speaking of the HIVE, I can highly recommend dropping in there on a Friday evening for our fibrecraft HIVE 101. If you ever feel like learning a bit more about weaving, talking to someone about knitting, or just settling down for an evening with some crochet, come on by!

New Non-fiction for People Who Care About the World

Tūhono — We Want Your Poems!