From the Vaults I: Manga

The vast collections of the Wellington Central Library have finally found a home in the Te Pātaka Collection Distribution Centre in Johnsonville, and the extensive YA collection is now available to borrow. The process is simple — just locate the item in our online catalogue, click “Reserve Item,” enter your card number and PIN, and select which library you’d like it to be sent to.

But some things are a little more difficult now that you can’t go and browse the shelves yourself. Even if you know what you’re looking for, and even though our catalogue does a pretty good job of telling you what we have and where it is, sometimes stuff is just hard to find. So we thought we’d start a blog series — From The Vaults — highlighting some of the cool stuff you can reserve.

Let’s start with manga. Manga (漫画 or マンガ or まんが) are pocket-sized comics normally originating from Japan. That’s not to say that manga can only come from Japan — many countries have their own independent industries now, from Korean manhwa (만화) and Chinese mànhuà (漫画) to manfra in France. They are usually printed in black-and-white, and read right-to-left, a feature which some say dates back to manga’s origins in 12th-century scrolls. Regardless of when it all started, manga are extremely popular today in Japan, and increasingly outside of Japan as well.

Wellington City Libraries has an extensive collection of manga series and stand-alone titles, from popular series like Naruto, Death Note, and Cardcaptor Sakura to alternative and underground works like Anomal and Iceland. As most of the books in this collection were held at Central, and are now in the closed stacks at Te Pātaka, we have produced a master list of all of the manga we hold — over 160 series and stand-alone titles, along with quick descriptions of the genres, themes, and target audiences of each manga. Sometimes, due to items being damaged or lost, you might notice that a series is incomplete. Never fear! Just get in touch with us using the Suggestion To Buy form, and we’ll move heaven and earth to locate that pesky missing volume and give you the satisfying and complete reading experience you need and deserve.

Go forth and explore! In the meantime, as it’s currently the Out On The Shelves campaign week, we thought we’d pick out some of our favourite manga featuring LGBTQ+ characters and themes.

Wandering son. Volume one / Shimura, Takako
{reps: trans*, lesbian}
Set in that period between the end of childhood and the beginning of adolescence, this gorgeous manga from arguably Japan’s greatest master of LGBTQ+ stories, Takako Shimura, Wandering Son follows friends Shuichi Nitori and Yoshino Takatsuki as they navigate school, life, and their relationships along with their growing understanding of their own gender identities. This is one of the few manga series to feature trans* characters as protagonists — and trust us when we say it’s not to be missed.

My lesbian experience with loneliness / Nagata, Kabi
{reps: lesbian}
My Lesbian Experience with Loneliness is an honest and heartfelt look at one young woman’s exploration of her sexuality, mental well-being, and growing up in our modern age. Told using expressive artwork that invokes both laughter and tears, this moving and highly entertaining single volume depicts not only the artist’s burgeoning sexuality, but many other personal aspects of her life that will resonate with readers.

My brother’s husband. Volume 1 / Tagame, Gengoroh
{reps: gay}
Yaichi is a work-at-home suburban dad in contemporary Tokyo; formerly married to Natsuki and father to their young daughter, Kana. Their lives suddenly change with the arrival at their doorstep of a hulking, affable Canadian named Mike Flanagan, who declares himself the widower of Yaichi’s estranged gay twin, Ryoji. Mike is on a quest to explore Ryoji’s past, and the family reluctantly but dutifully takes him in. What follows is an unprecedented and heartbreaking look at the state of a largely still-closeted Japanese gay culture: how it’s been affected by the West, and how the next generation can change the preconceptions about it and prejudices against it.

Pretty guardian Sailor Moon. 1 / Takeuchi, Naoko
{reps: lesbian}
Usagi Tsukino is a normal girl until she meets up with Luna, a talking cat, who tells her that she is Sailor Moon. As Sailor Moon, Usagi must fight evils and enforce justice, in the name of the Moon and the mysterious Moon Princess. Anyone familiar with the history of manga and anime will have at least passing familiarity with Pretty Guardian Sailor Moon — and the same-sex relationship between Sailor Neptune and Sailor Uranus is legendary among fans of the series. 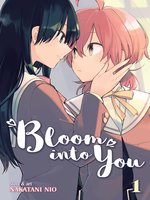 Bloom Into You, Volume 1, Nakatani Nio (ebook)
{reps: lesbian}
Yuu has always adored shoujo manga and yearns for the day when someone might give her a love confession that would send her heart aflutter. Yet when a junior high school classmate confesses his feelings to her–she feels nothing. Disappointed and confused, Yuu enters high school, where she sees the confident and beautiful student council member Nanami. When the next person to confess to Yuu is Nanami herself, has her romantic dream finally come true?

Ouran High School Host Club. Vol. 1 / Hatori, Bisco
{reps: genderfluid/genderqueer, queer}
Ouran High School Host Club is a great shōjo manga from the early 2000s that almost single-handedly deconstructs many of society’s most carefully-constructed preconceptions about gender roles, sexuality, and gender identity. Main character Haruhi is biologically female, but presents androgynously and has no hang-ups about adopting a very fluid approach to their gender. In the original Japanese, they refer to themselves almost exclusively using gender-neutral pronouns (a feature that is sadly lost in the English translation — see a nuanced discussion of gender in OHSHC here), and their parent, Ryoji, is openly queer and presents in drag most times we meet him. Read and enjoy, friends!

Cardcaptor Sakura. Book 1 / CLAMP (Mangaka group)
{reps: lesbian, bisexual, gay, pansexual, genderqueer}
When Sakura Kinomoto finds a strange book in her father’s library, the only thing left inside is Kero-chan, the book’s cute little guardian beast, who informs Sakura that since the Clow cards escaped while he was asleep, it’s now her job to capture them. Cardcaptor Sakura is revolutionary among mainstream manga for its easy and natural portrayal of a wide range of LGBTQ+ characters, including Sakura herself (pan), her best friend Tomoyo (lesbian), and a steady, loving gay couple (Toya and Yukito). Plus there’s plenty of epic fantasy elements and a great story to boot.

Out On The Shelves: Rainbow Stories at Your Library

Newly 18? Not 18 yet but want to know more about the election?