Opposite of always, Justin A. Reynolds

When Jack and Kate meet at a party, bonding until sunrise over their mutual love of Froot Loops and their favorite flicks, Jack knows he’s falling–hard. Soon she’s meeting his best friends, Jillian and Franny, and Kate wins them over as easily as she did Jack. But then Kate dies. And their story should end there. Yet Kate’s death sends Jack back to the beginning, the moment they first meet, and Kate’s there again. Healthy, happy, and charming as ever. Jack isn’t sure if he’s losing his mind. Still, if he has a chance to prevent Kate’s death, he’ll take it. Even if that means believing in time travel. However, Jack will learn that his actions are not without consequences. And when one choice turns deadly for someone else close to him, he has to figure out what he’s willing to do to save the people he loves. (Publisher summary)

Tough enough? Smart enough? Max will require all his skills just to stay alive as a Special Forces Cadet…A top-secret government programme needs a crack team of undercover military operators. They must have awesome levels of determination, endurance and fitness. They must be able to think on their feet. The recruits undergo the most rigorous and testing selection process the modern military can devise. And in order to operate in circumstances where adult forces would be compromised, the recruits must be under sixteen. Only a few are tough enough and smart enough to make it…And once out in the field, they will require all their skills just to stay alive. Which is what happens when Max Silver, Abby Asher, Lukas Channing and Sami Hakim are sent into an armed siege in an inner-city school…(Publisher summary)

When Sybella accompanies the Duchess to France, she expects trouble, but she isn’t expecting a deadly trap. Surrounded by enemies both known and unknown, Sybella searches for the undercover assassins from the convent of St. Mortain who were placed in the French court years ago. Genevieve has been undercover for so many years, she no longer knows who she is or what she’s supposed to be fighting for. When she discovers a hidden prisoner who may be of importance, she takes matters into her own hands. As these two worlds collide, the fate of the Duchess, Brittany, and everything Sybella and Genevieve have come to love hangs in the balance. (Publisher summary)

‘I wish I wasn’t the weirdest sixteen-year-old guy in the universe.’ Felix would love to have been a number. Numbers have superpowers and they’re safe, any problem they might throw up can be solved. ‘If I were a five, I’d be shaped like a pentagon…there’d be magic in my walls, safety in my angles.’ People are so much harder to cope with. At least that’s how it seems until Bailey Hunter arrives at school. Bailey has a stutter, but he can make friends and he’s good at judo. And Bailey seems to have noticed Felix: ‘Felix keeps to himself mostly, but there’s something about him that keeps drawing me in.’ Both boys find they’re living in a world where they can’t trust anyone, but might they be able to trust each other, with their secrets, their differences, themselves? (Publisher Summary)

Quiet, shy Elyse is cast as the lead in her Portland high school’s production of Romeo and Juliet– and is having an affair with a teacher twice her age. Gabe broke up with Sasha, his headstrong, popular girlfriend– and now she’s stalking him, spreading rumors… and worse. Both students fell for the wrong person. Now they’re finding out how one bad choice can lead to a spiral of unforeseen consequences– and sometimes not everyone will survive. (Publisher summary)

Black enough : stories of being young & black in America, edited by Ibi Zoboi

A collection of short stories explore what it is like to be young and black, centering on the experiences of black teenagers and emphasizing that one person’s experiences, reality, and personal identity are different than someone else. (Publisher summary)

All sorcerers are evil. Elisabeth has known that as long as she has known anything. Raised as a foundling in one of Austermeer’s Great Libraries, Elisabeth has grown up among the tools of sorcery–magical grimoires that whisper on shelves and rattle beneath iron chains. If provoked, they transform into grotesque monsters of ink and leather. She hopes to become a warden, charged with protecting the kingdom from their power. Then an act of sabotage releases the library’s most dangerous grimoire. Elisabeth’s desperate intervention implicates her in the crime, and she is torn from her home to face justice in the capital. With no one to turn to but her sworn enemy, the sorcerer Nathaniel Thorn, and his mysterious demonic servant, she finds herself entangled in a centuries-old conspiracy. Not only could the Great Libraries go up in flames, but the world along with them. As her alliance with Nathaniel grows stronger, Elisabeth starts to question everything she’s been taught–about sorcerers, about the libraries she loves, even about herself. For Elisabeth has a power she has never guessed, and a future she could never have imagined. 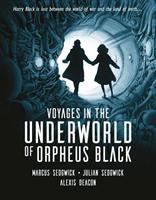 Voyages in the underworld of Orpheus Black, Marcus Sedgwick

A lyrical and dreamlike story of two brothers in conflict amidst the devastation of WWII London. Harry Black wakes in hospital to learn that his brother Ellis has almost certainly been killed by a V2 rocket falling during a German air raid on London. In a state of wounded delirium, Harry’s mind begins to blur the distinctions between the reality of the war-torn city, the fiction of his unpublished sci-fi novel and the myth of Orpheus and Eurydice. Driven by visions of Ellis still alive and a sense of poetic inevitability, Harry discharges himself from hospital and begins a search for his brother that will lead him deep into the city’s Underworld…(Publisher summary)

I hold your heart, Karen Gregory

‘You make me feel like there’s something good in the world I can hold on to,’ Aaron says. He kisses me again, draws me so close it’s almost hard to breathe. ‘I love you, Gem. And I promise I’ll hold your heart forever.’ When Gemma meets Aaron, she feels truly seen for the first time. Their love story is the intense kind. The written-in-the-stars, excluding-all-others kind. The kind you write songs about. But little by little their relationship takes over Gemma’s life. What happens when being seen becomes being watched, and care becomes control? Told in both Gemma’s and Aaron’s words, this is a raw, moving exploration of gaslighting in teenage relationships that skewers our ideas of what love looks like. (Publisher summary)

We’ve got some amazing databases available at WCL and over the next few weeks I’ll be highlighted a few which I think are pretty awesome. You can access this particular database through the “Arts and Design” link on our online databases page. It’s pretty incredible, especially if you’re studying drama or (and!) Shakespeare. The blurb:

“Drama Online is a one stop shop for anyone with an interest in drama. This award winning database features over 1,200 classic and contemporary play texts, including the complete works of Shakespeare. Background to the plays are provided through critical scholarly works, theory and practical ‘how-to’ guides. There is also streaming video of live performances from Shakespeare’s Globe and professional audio recordings from L.A. Theatre Works. Search for and sort plays and monologues using cast size, gender, roles, genre, period, author, setting and theme filters. There is plenty here to discover.”

I really enjoyed the Royal Shakespeare Company’s productions of Othello, Macbeth, and Titus Andronicus. It’s an amazing way to view Shakespeare performed by the best actors, in interesting and unique productions – sometimes you need something new to bring the Bard to life – and free, as well!

Hello! Things have been a bit disrupted with the closure of the library, but here’s a new post! A short one but just to remind you all that we’re still around. More new books posts (and others) will be put up as time allows.

The 64 members of Fire Lake’s sophomore class have managed to survive the first two phases of the Program–and each other. Now, they alone have emerged into the dawn of a new era on Earth, into a Fire Lake valley that’s full of otherworldly dangers and challenges. Although staying alive in this broken world should force Min, Noah, Tack, and the others to form new alliances, old feuds die hard, and the brutality of the earlier Program phases cannot be forgotten. But being a team isn’t easy for the sophomores, and when they discover that they may not be alone on the planet after all, they’ll have to decide if they’re going to work together…or die together. (Publisher summary)

In the perilous days of World Wars I and II, the gods hold the fates — and the hearts — of four mortals in their hands. They are Hazel, James, Aubrey, and Colette. A classical pianist from London, a British would-be architect-turned-soldier, a Harlem-born ragtime genius in the U.S. Army, and a Belgian orphan with a gorgeous voice and a devastating past. Their story, as told by goddess Aphrodite to her husband, Hephaestus, and her lover, Ares, is filled with hope and heartbreak, prejudice and passion, and reveals that, though War is a formidable force, it’s no match for the transcendent power of Love. (Publisher summary)

Brienna is a mistress of knowledge and is beginning to settle into her role as the daughter of the once disgraced lord, Davin MacQuinn. Though she’d just survived a revolution that will return a queen to the throne, she faces yet another challenge: acceptance by the MacQuinns. But as Queen Isolde Kavanagh’s closest confidant, she’ll have to balance serving her father’s House as well as her country. Then there’s Aodhan Morgan, formerly known as Cartier Évariste, who is adjusting to the stark contrast between his pre-rebellion life in Valenia and his current one as lord of a fallen House. As he attempts to restore the Morgane name, he let his mind wander–what if he doesn’t have to raise his House alone? What if Brienna could stand by his side? But Brienna and Cartier must put their feelings aside, as there are more vital tasks at hand–the Lannons’ trial, forging alliances, and ensuring that no one halts the queen’s coronation. Resistance is rumbling among the old regime’s supporters, who are desperate to find a weakness in the rebels’ forces. And what makes one more vulnerable than love? (Publisher summary)