Tyler Bruce, hell raiser and bad boy, tells his story in his own words. Alternating between past and present, Just Don’t Mention It is narrated from Tyler’s perspective. We see him as the daredevil seventeen-year-old we first met in Did I Mention I Love You?, the stepbrother who falls head over heels for Eden. (Publisher summary)

Enter foster-kid-out-of-water Elle Zoellner, who, on her sixteenth birthday discovers that her long-lost father, Kenji Takahari, is actually a Japanese hotel mogul and wants her to come live with him. Elle jets off first class from Washington D.C. to Tokyo, which seems like a dream come true. Until she meets her enigmatic father, her way-too-fab aunt, and her hyper-critical grandmother, who seems to wish Elle didn’t exist. (Publisher summary) 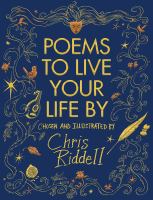 Poems to live your life by, chosen and illustrated by Chris Riddell

Now that Ansa knows she is the destined queen of Kupari, she is desperate to find a permanent home for her people, the Kriegere, in the Kupari lands. But as the small band of warriors crosses into the foreign territory, Ansa loses her fragile grip on her newly-acquired–and violent–fire and ice magic and puts everyone, including her love Thyra, in danger. Inside the walls of Kupari, Elli maintains the facade that she is the magical queen, with her secret–that she has no magic at all–on the brink of exposure every day. But as she tries to prepare the citizens to protect themselves from another invasion, unrest spreads as wielders like her beloved Oskar begin to lose control of their powers. As Kupari grows increasingly unstable, with the land literally crumbling beneath their feet, and a common enemy once again threatening everything, these two young women on a collision course with destiny must find a way to save the realm and their people from total destruction. (Publisher summary)

The weight of a thousand feathers, Brian Conaghan

Bobby Seed is a caregiver. Along with the usual school-related responsibilities of a 17-year-old, Bobby is tasked with looking out for his younger brother, keeping the house clean and food on the table, and, most important, taking care of his mother, whose advanced-stage MS is rapidly taking its toll on her body and mind. Just as his mother asks him to consider helping her end her suffering, Bobby starts attending a support group for teen caregivers and finds solace and possible romance within the group. (Booklist)

Hotshot pilot Nax Hall has a history of making poor life choices. So it’s not exactly a surprise when he’s kicked out of the elite Ellis Station Academy in less than twenty-four hours. But Nax’s one-way trip back to Earth is cut short when a terrorist group attacks the Academy. Nax and three other washouts escape–barely–but they’re also the sole witnesses to the biggest crime in the history of space colonization. And the perfect scapegoats. On the run, Nax and his fellow failures plan to pull off a dangerous heist to spread the truth. Because they may not be “Academy material,” and they may not even get along, but they’re the only ones left to step up and fight. (Publisher summary)

When she was little, Joni used to have dreams that she could fly. But these days her feet are firmly on the ground they have to be when money’s tight and her dad can’t work and the whole family has to pull together to keep afloat. Then she meets Annabel. Annabel is everything Joni isn’t, and yet there’s a spark between them. (Publisher summary)

Life on the Crongton estate can be rough for Briggy. Dad’s lost his job, Mum’s always working to make ends meet and big brother Kingsley just wants out. Then Briggy’s best mate Terror cooks up a plan to impress the coolest chick in the year, Caldonia Lake. Briggy doesn’t want to lose face by chickening out and, who knows, maybe they’ll make a quick buck. So what is Terror’s master plan? Robbing the post office. What could possibly go wrong? (Publisher summary)

Tech in her veins. Anarchy in her blood. In the City, they have it all – sunlight, a corp job, a corpbloc home miles above the poisoned earth below. Four-hundred storeys down, in the darkness of the undercity slums, lives sixteen-year-old orphan Nova. Nova is a hacker. Aided by the program Phantom, she can sneak up to the City, leech what she needs and sink back down again, invisible as a ghost.But Nova has caught someone’s eye, and that’s Phantom-creator and legendary anti-corp hacker the Moth. Now the Moth has a job for Nova. A job that will send her miles into the sky.To bring the City crashing down. (Publisher summary)

Black enough: stories of being young and black in America, edited Ibi Zoboi

Edited by National Book Award finalist Ibi Zoboi, and featuring some of the most acclaimed bestselling Black authors writing for teens today–Black Enough is an essential collection of captivating stories about what it’s like to be young and Black in America. Black is…sisters navigating their relationship at summer camp in Portland, Oregon, as written by Renée Watson. Black is…three friends walking back from the community pool talking about nothing and everything, in a story by Jason Reynolds. Black is…Nic Stone’s high-class beauty dating a boy her momma would never approve of. Black is…two girls kissing in Justina Ireland’s story set in Maryland. Black is urban and rural, wealthy and poor, mixed race, immigrants, and more–because there are countless ways to be Black enough. (Publisher summary)

Scott nearly died playing Virtual Kombat, the virtual-reality fighting game that risks the lives of street kids for profit. Hunted by Wasp drones, Scott’s on the run when he comes across a gang of techno-hackers who share his wish to destroy VK. They’ve developed a virus that could do the job, but in order to implant it Scott has to re-enter the arena and risk being trapped inside the game for ever…(Publisher summary)

Beyond Marvel and DC!