It’s the most celebrated day in the Star Wars calendar! Well, apart from the day that a new movie comes out, of course. We have an amazing bunch of Star Wars comics and books in the YA collection – but we’ve got plenty in our other collections as well – enough to help any geek’s Star Wars fix. If you’re looking for the movies and tv series, they’re easy enough to find in our catalogue – this post is for all those other Star Wars works that you may not know about.

So, starting with the YA collection: Claudia Gray, a rising star (hah) in the YA collection, has written an amazing novel about Princess Leia’s early life. Big Leia fan? We also have a couple of graphic novels about her. Reading these always makes me sad – Carrie Fisher is a great loss. It’s important to note that she was much, much more than that: she was open about her troubled life, and an extremely funny writer. I recommend The Princess Diarist – her own diaries written while she was filming Star Wars.

On the Dark side of the Force, I really enjoy the Darth Vader comics. There’s also a series that focuses on the rise of the Empire after the Clone Wars. I really enjoy these – the great thing about Star Wars is that the villains are often as compelling as the heroes. Speaking of, we also have a Captain Phasma comic.

There’s a cute comics collection of the unsung heroes of the Star Wars universe: the droids. The graphic novel we have is a fun, offbeat look at what C3PO and R2D2 got up to between the movies. I’m also pretty fond of the comic about Lando Calrissian, everyone’s favourite rogue. (Shhh, don’t tell Han!) We also have a fun book on the greater universe of Star Wars: aptly called “The illustrated Star Wars universe.” This consists of various characters discussing places in the Star Wars Universe – it’s pretty hilarious, although it was written pre-sequels, so some of the information might not be cannon. 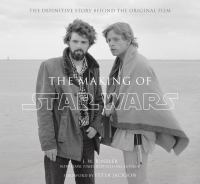 And what about the movies themselves? We’ve got some great non-fiction discussing what went into the various movies. My top pick is The making of Star Wars : the definitive story behind the original film. It’s pretty much what you see in the title. There are others in the same series dealing with the prequel and original films. Then there’s a couple of gorgeous couple of books on the costumes of the movie series: Dressing a Galaxy and Star Wars costumes: the original trilogy. Sadly we have to wait for the costume guides for the sequels.

I think you can guess what my sign off will be…