Not just fashion… HIGH fashion. (Such a beautiful book, btw.) 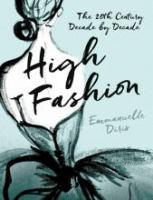 High fashion : the 20th century decade by decade / Emmanuelle Dirix.
“From the Golden Age of Haute Couture in the 1900s to the lifestyle brands of the 1990s, this book looks, decade-by-decade, at the high fashion of the 20th century. Each chapter examines the significant stylistic changes that occurred in the decade in question, and places these in their cultural and political context. The book is illustrated throughout with photographs and drawings of the clothes and the people who wore them. Alongside the individual chapters, three designers that made their mark on fashion are discussed, as well as three key looks per decade. Many of the designers are household names; some are lesser known. But all these individuals, whether through their designs or their business practices, are exemplars of their age.” – Syndetics summary

Coming Up Next Year