Alexander McQueen’s show ‘Dante’ from Autumn / Winter 1996 went down as “possibly the greatest fashion show on Earth” and left McQueen’s mark on fashion forever, becoming a collection which was constantly referenced by McQueen as well as other designers. Inferno: Alexander McQueen: an intimate portrait of his seminal show Dante features amazing photography from the ground-breaking show, including previously unseen pictures of the designer, models and clothes. It’s so glossy and beautiful. You can watch the show here (it’s 25 minutes of your life but totally worth it imo) and if you want Dante’s Inferno, we have that too. 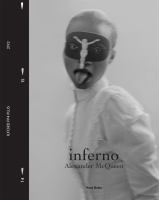 Inferno : Alexander McQueen : an intimate portrait of his seminal show Dante, autumn/winter 1996-97 / Kent Baker.
“London 1996: Alexander McQueen took over the Hawksmoor masterpiece Christ Church in London’s East End for what was quite possibly the greatest fashion show on Earth. A candle-lit, cruciform catwalk with a backdrop of stained-glass windows set the tone for an extraordinary collection. Lace sat against chiffon and rubbed shoulders with couture and club-culture clothing and digital print. Dante was the seminal collection that would resonate throughout Alexander McQueen’s career. This book features unique photographs shot behind the scenes, with raw, unseen pictures of the designer, models and clothes. The fashion creatives who worked with McQueen to make the show such a success recall this pivotal time in the designer’s career and reflect on what made Dante truly groundbreaking. Newly created imagery of clothes shown on the catwalk gives an insight into why this collection was so special.” (Syndetics summary)