Getting mail when I was a kid was always exciting. It meant birthday cards or a letter from a relative who was far away or postcards with pretty pictures of exotic places. Envelopes meant I got something that was just for me. As a side note, I’d like to stress that the internet wasn’t around as much when we were growing up. Now the envelopes I get mostly contain bills or letters from Studylink or IRD. Which are usually far from fun. Check that alliteration. Anyway, it would appear that envelopes are universally pretty exciting. Or some book publishers think so. This is a collection of some of the envelope themed book covers we have:

In this modern-day suburban town, one percent of all fatalities come about in the most peculiar way. Deaths—eight-foot-tall, silver-gray creatures—send a letter (“Dear So-and-So, your days are numbered”) to whomever is chosen for a departure, telling them to wrap up their lives and do the things they always wanted to do before they have to “depart.” When sixteen-year-old Gabriela receives her notice, she is, of course devastated. Will she kiss her crush Sylvester before it’s too late?

The death of social worker Lesley Cozens brings together two unlikely teenagers; her daughter Chloe and “delinquent” charge Nicky Nelson. Lesley wrote Nicky a letter before she died which triggers a rage in Nicky and potentially tragic consequences if Chloe had not got involved. When Nicky begins hanging around Chloe’s house with a mixture of curiosity and anger that she has had a happy life compared with his, he is prepared to hate her, but instead the two of them form a strange kind of bond. Chloe is her mother’s daughter, and finds herself wanting to help Nicky find his real mother, the one who abandoned him at birth. Ironically, the clues she pieces together about what happened lead her back to her mother’s home town, and to her childhood friend, Sonia, who is keeping a painful secret of her own.

We’ve mentioned this one before and we’ll be mentioning it again we can promise. Until you’ve all read it because it is that good. Frankie Landau-Banks is a super smart teen in a super competitive private boarding school. She’s on a mission to prove everyone wrong. And carry out some genius pranks and have some misadventures along the way. Not the misadventures you’re thinking of though, Frankie takes on a male-only secret society and races to solve a decades old mystery.

Seventeen-year-old Ginny receives a little blue envelope from her favorite aunt. It contains $1,000 in cash, and the instructions to pick up a package of envelopes that start Ginny on a trip around Europe, tracing the steps of her eccentric Aunt. The instructions are specific; no cell phones, no maps, and Ginny can only open one envelope at a time, after she’s completed each task in the previous letter. Ginny leaves New Jersey to criss-cross Europe on a sort of scavenger hunt that transforms her life. There’s also the sequel: The Last Little Blue Envelope.

The S.A.S.S. : Students Across the Seven Seas books

These are about young girls who are studying abroad. When Irish Guys Are Smiling is about seventeen-year-old Delk Sinclair who wants to get away from debutante balls and her pregnant young stepmother in Nashville so she goes to Connemara, Ireland for a semester of study. There she falls for a handsome young Irishman and finally begins to recover from the death of her mother. The Great Call of China is about 16-year-old Cece who goes to China in an attempt to discover her roots and possibly find out about her birth parents. Born in China, but adopted at age 2 and living in Texas, Cece finds culture shock and romance as she pursues the information to satisfy her questions. 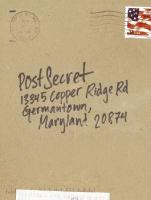 Frank Warren had an idea for a community art project: he began handing out postcards to strangers and leaving them in public places – asking people to write down a secret they had never told anyone and mail it to him, anonymously. The response was overwhelming. The secrets were both provocative and profound, and the cards themselves were works of art – carefully and creatively constructed by hand. Addictively compelling, the cards reveal our deepest fears, desires, regrets, and obsessions. As Frank began posting the cards on his website, PostSecret took on a life of its own, becoming much more than a simple art project but is now a global phenomenon.