Us again, and we do hope you’ve been chillin’ out, maxin’, relaxin’ all cool over the Christmas break. To help you along with that all the way through the new year, we’ve come up with a few great movie suggestions from the young adult dvd section, which are just 80c to issue with your young adult library card! Admittedly, you will have to get out of the house to issue them, but that’s a minor detail.

Tomorrow When The War Began
Based on the John Marsden book of the same name, the story follows eight high school friends whose lives are suddenly and violently upended by a war that no one saw coming. They must learn to escape, survive and fight back against a hostile military force. And blow up stuff, a lot of stuff. While looking beautiful.

Under The Mountain
When teenage twins Rachel & Theo investigate the creepy house next door, they discover the Wilberforces – shape shifting creatures that lurk beneath Auckland’s ring of extinct volcanoes. Guided by the mysterious Mr Jones and with the help of their cousin Ricky, the twins must rekindle the unique powers they once shared if they are to destroy this ancient evil. This film does Maurice Gee’s epic story justice with a decent amount of money spent on special effects for once. Forget that they have the same accents as the stars of Shortland Street, this film’s amaze-balls.

Planet Earth
The entire collection of the groundbreaking series narrated by David Attenborough. With a budget of unprecedented proportions, Planet Earth has stretched the boundaries of natural history documentary making. This film has breathtaking shots of the planet we all know so well. It’s not like anything you’ve ever seen before with every frame fascinating or beautiful, usually both.

Stardust
In hopes of wooing a beautiful girl, Tristan promises to bring her a falling star. Yeah it is as awesome as it sounds. This is more than your usual love story as Tristan is in for a magical adventure with wicked witches, scheming princes (who keep dying) and by far the coolest cross-dressing sky pirate you’ll ever see. Possibly the only one you’ll ever see as well. This is an exciting and witty tale along the same vein as The Princess Bride.

Brick
Brendan Frye is a loner, someone who knows all the angles but has chosen to stay on the outside. When the girl he loves turns up dead, he is determined to find out the “who” and “why” and plunges into the dark and dangerous social strata of rich girl Laura, intimidating Tug and the ominous Pin. But who can he really trust? Director and screenwriter Rian Johnson (of Looper and The Brothers Bloom) has invented a whole new lingo to fit into the film’s universe. It’s a stylish modern noir thriller at its best.

Dead Poets Society
When charismatic English teacher John Keating arrives at a strict boys academy, his unconventional teaching methods breathe new life into the curriculum steeped in tradition. With his wit and wisdom, Keating encourages his students to be true to themselves and make their lives extraordinary. Equal parts inspirational and heartbreaking – have the tissues ready. O captain! My captain!

Whip It
We recommended the book, and here’s the film! Essentially the same story as the novel, following Bliss Cavendar on her quest to become a roller derby star while contending with her mother’s obsession with entering her in beauty pageants. Bliss learns a lot about herself and consequences of her actions along the way. Action packed with an awesome and energetic soundtrack and a healthy dose of girl power, Whip It is one of my absolute favourite movies.

Summer Wars
Kenji is your typical teenage misfit. He spends most of his time hanging out in the all-powerful online community called Oz. His second life is the only one he has, until the girl of his dreams hijacks him for a starring role as her fake fiance at her family reunion. Things only get stranger. A late-night email containing a cryptic mathematical riddle leads to the unleashing of a rogue AI intent on using Oz to destroy the real world. Kenji and his new ‘family’ have to work together to save the worlds they inhabit.

A Town Called Panic
Based on the tv show of the same name, this movie is MANIC. That is the only word for it. The unlikely trio of Horse, Cowboy and Indian (plastic toys with no opposable limbs) live together in a crooked house on a hill. Cowboy and Indian realise with horror that they have forgotten Horse’s birthday and embark on a series of implausible adventures, taking a journey to the Earth’s core, discovering an aquatic parallel universe and taking part in a breakneck snowball ride across a frozen wasteland. Hilarious. You’ll be in stitches!

Mary and Max
A very clever claymation story of a pair of unlikely penpals – Mary, a lonely 8-year-old Australian girl and Max, a 44-year-old severely obese Jewish man with Asperger’s Syndrome. Their friendship grows and spans over twenty years with a lot of ups and downs, and covers a whole range of topics, from taxidermy to trust to agoraphobia.

Scott Pilgrim vs the World
Another of my absolute favourite films! Meet charming and jobless Scott Pilgrim. A bass guitarist for a garage band trying to make it big through the Battle of the Bands in Canada, the 22-year-old has just met the girl of his dreams – literally. But there’s one catch to winning over Ramona Flowers – he has to meet and defeat her seven evil exes! Based on the graphic novels by Brian Lee O’Malley, the film incorporates multimedia elements which make it feel like both a movie and a video game. Bright colours! Sounds! Flashing lights! This movie has it all.

Rize
This is a documentary about krumping. Yes, you read that correctly. Don’t know what krumping is? You have to see this film to believe it. Krumping originated in the early 1990s in inner city Los Angeles and evolved from another dance style called ‘clowning’. Those 90s kids were crazy with their dance names. This doco was made by the photographer David LaChapelle and as such it looks incredibly pretty and hyper-real.

We hope you’ve had a great Christmas, now kick back and relax with some fantastic film fun! 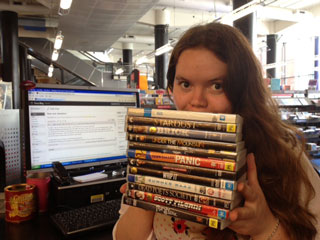