In Books, Rachel and Rebecca

Hello, hello and welcome to Rest and Relaxation with us, Rachel and Rebecca. Check out that alliteration. The YA collection is full of incredible gems that for whatever reason, sometimes become hidden or forgotten about. Which is where we come in. We want to help you discover some of the marvels in our collection.

Anya is your regular teenage girl dealing with an overbearing mother and the trials of high school (fitting in, bullying, crushes and the like). One day she meets the ghost of Emily Reilly, a girl her age who died 90 years or so earlier. At first all is well with Emily helping Anya cheat on tests in school and advising her in what to say to the cute boy. It all goes wrong however when Anya begins to question Emily’s motives…

Another one about your average girl. Paige has just moved to New York from rural Virginia (a distance the internet tells me is 543km, slightly further than moving from Wellington to Auckland) and is struggling to navigate the big city, not to mention a new school. Paige loves to draw and it is in the pages of her sketchbook that she tries to make sense of her new life, including trying out her secret identity: artist. As she becomes more confident in her drawing, she becomes more confident in her self.

After the death of his American father in war, Ichiro is raised by a Japanese mother in New York City. Because of his dual heritage Ichiro finds it difficult to figure out where he fits in, he looks Japanese but feels like a regular American teenager. During a business trip to Japan he is left with his grandfather who teaches him Japanese history and myths. One night Ichiro discovers they might not be just myths and that the world of the gods really does exist. In some form. Ichiro is a beautiful coming of age story for anyone who love myths and legends about the gods. 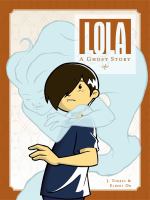 Jesse sees dead people. He’s the only one who can, aside from his grandmother, who has just passed away. Jesse has to travel with his family from his home in Canada to the Philippines where he was born, although he dislikes it more and more each time he goes there. When he arrives, Jesse has to deal with rogue spirits, on his own this time. Lola deals with loss and grief in different forms, with a twist of dark humour.

Chimichanga is the tale of Lula, a young bearded girl in a traveling circus of, well, fairly average people, really. While wandering one day, Lula trades some of her beard hair for a large egg, which hatches into a new friend named Chimichanga, Chimi for short. He joins Lula’s circus act, but the other performers grow jealous of the attention Chimi draws, and they begin to plot their revenge. It sounds weird, and frankly, it is. The characters are a bit grotesque – I don’t recommend eating lunch while you read (I learnt the hard way). However, it’s also rather touching, and Lula is utterly charming.

A few hundred years in the future, humans are on the verge of extinction. Babies can no longer be born, and human cloning has still not been perfected. At age 15, three of the youngest people on Earth are just trying to go to high school and get on with their lives. But when they stumble upon an unsolved case of a missing girl, it might just lead them to saving the world. Each of the three teens has a distinctive personality, and the art in The Never Weres keep you wanting to turn those pages.

And that’s it from us today! We really hope you’ve enjoyed our recommendations and perhaps found something new to feast your eyes on. We’ll be back shortly with a (vaguely) Christmas themed post, so keep your eyes peeled! If you have any thoughts on underappreciated items in our collection, or any suggestions or feedback for future topics, please leave a comment below.