New York fashion week’s biggest show – the one that WILL influence what you’ll be wearing in seasons to come – Marc Jacobs, brought to you by one of the world’s biggest fashion bloggers Garance Dore – someone who has made a successful million dollar career out of blogging.

The real skill of Dore’s is not so much the topics covered but the tone.  She really makes you feel like you’re her friend, having a sneak-peek at the hottest New York fashion parties, the front row fashionistas, coming across as human and humorous.  Check out her blog (or her youtube channel) for her Pardon my French series of clips that show you more about fashion week than just pretty models in clothes.

In which Iron Man, Captain America, Hulk, Thor, Black Widow and Hawkeye teach Loki a lesson (we hope! (that would be a whole other movie (but equally fun perhaps))).

A bargain at 80c for one week on a young adult’s card.

You can keep up to date with new DVDs as they come in using this RSS feed.

Let the other games begin!

Breaking Dawn Part 2, in which Bella leaps tall pine trees in a single bound, and in which the big show down between the Cullens and the Volturi finally takes place, has a trailer:

The film is out on November 16th. Read the book to refresh your memory before then! Also, watch Part 1 on DVD (80c on a young adult card).

Here’s a sample of what’s available from Bolinda:

Titles are available for three weeks: you can reserve them for free, and there are no overdue charges! All good news!

A couple of angels, fairies (perhaps!), a shade, a troubled teen, and twins.

Some Kind of Fairy Tale, Graham Joyce (414 pages) – One day (Christmas, to be exact), Peter gets a phone call from his parents to say that his sister, Tara, has arrived home. Tara has been gone for twenty years, and she’s back with incredible tales of adventure. But Tara looks the same as she did when she disappeared, and Peter wonders if there’s something a bit different about her (and do the woods around their parents’ home have something to do with it?).

First sentence: In the deepest heart of England there is a place where everything is at fault.

Fury, Rebecca Lim (368 pages) – the fourth book in the Mercy series. “Heartbreak. Vengeance. Fury. Mercy is an exiled angel cast down to earth and forced to live out thousands of different lives for her own protection. Betrayed by her eternal love, Luc, Mercy burns with fury. The time of reckoning is here and now she must wage open war with Luc and his demons. Ryan’s love for Mercy is more powerful than ever, but loving an angel is mortally dangerous. As their two worlds collide, Mercy approaches her ultimate breathtaking choice.” (catalogue)

First sentence: Picture, if you can, the ancient city of Milan in the dead of night, lashed by an unimaginable storm.

Shift, Jeri Smith-Ready (367 pages) – this is the second in the Shade trilogy. “Aura’s life is anything but easy. Her boyfriend, Logan, died, and his slides between ghost and shade have left her reeling. Aura knows he needs her now more than ever. She loves Logan, but she can’t deny her connection with the totally supportive, totally gorgeous Zachary. And she’s not sure that she wants to. Logan and Zachary will fight to be the one by her side, but Aura needs them both to uncover the mystery of her past – the mystery of the Shift. As Aura’s search uncovers new truths, she must decide whom to trust with her secrets… and her heart” (cover).

First sentence: I held my breath as it began, the last verse of the last song.

Happy Families, Tanita S Davis (234 pages) – Twins Ysabel and Justin have a perfect life and a happy family, and are preparing for life after school (Ysabel as an aspiring jewellery designer, Justin as a college student), when their father makes an announcement that will turn their world on its end.

First sentence: The surge of chattering, pointing, gawking people pours into the massive auditorium, and I feel a shiver crawl up my arms.

Heaven, Alexandra Adornetto (417 pages) – the conclusion to the Halo trilogy. In which Bethany and Xavier take a rather important step in their relationship – a forbidden marriage – and come up against the Sevens, who are (I think) like the angel equivalent of the SAS, and who are bent on keeping Bethany and Xavier apart. Will true love conquer?

First sentence(s): Everything began to rattle. I clutched the edge of the table and watched my engagement ring tumble onto the checkered floor of Sweethearts Cafe.

Trapped Outside a Cage, Ken Benn (237 pages, New Zealand author) – “Rochelle’s brother, Jack, is in prison for the murder of Methsy, and Rochelle is convinced he didn’t do it. But if Jack is innocent, then why has he confessed to the crime? Rochelle is about to find out that something or someone with sinister intentions is behind Jack’s actions” (summary from the publisher – thanks!).

It’s a little late of me to point this out, but New Zealand Fashion Week is just coming to an end in Auckland, as we speak. There’s been great coverage online, if you don’t already know, so everyone still has time to catch up on what their favourite New Zealand designers have created for the next season.

May I reccommend you check out excellent blogger Katherine is Awesome, who has all social media mediums covered for, um, coverage – twitter, instagram and tumblr (as well as her blog).

There’s also the good old Glassons blog Style Keeper and one I follow called Amber and Hilary – they have great pics of the catwalk shows and the glamourous show attendees. Of course there is the official Fashion Week website, and I’m sure a plethora of other sites to keep you updated. So you really have no excuse for not being an informed Kiwi fashionista! 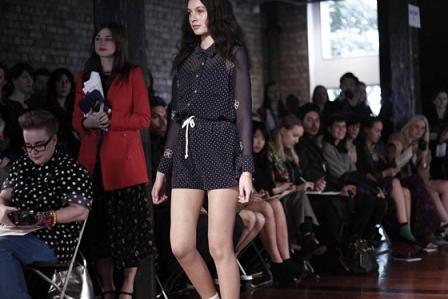 Anything from David Levithan. And this one sounds like Quantum Leap (as Stephanie points out), the cool TV series from the early 1990s (see the IMDB profile here; we’ve also got it on box set DVD ($8 for three weeks) here).

Every Day, by David Levithan (September). A novel about love and messing with the time-space continuum (or something like that). “Every morning, A wakes in a different person’s body, a different person’s life. There’s never any warning about where it will be or who it will be. A has made peace with that, even established guidelines by which to live: Never get too attached. Avoid being noticed. Do not interfere. It’s all fine until the morning that A wakes up in the body of Justin and meets Justin’s girlfriend, Rhiannon. From that moment, the rules by which A has been living no longer apply. Because finally A has found someone he wants to be with – day in, day out, day after day.” (goodreads.com)

At Entertainment Weekly’s website there is an exclusive video of several authors taking turns narrating A’s story. You can see if you recognise anybody here.

In Books, Grimm, Most Wanted

There is a new most-wanted book this month: Robert Muchamore’s CHERUB books are always über popular, and now there’s CHERUB series 2! Other new books to watch out for include The Rise of Nine, the next instalment in the Lorien Legacies sci fi series, and Finale, which promises to be the end to the Hush, Hush series by Becca Fitzpatrick. Series are the winners!

Some manga series you might enjoy, if you haven’t already discovered them!

Sakura Hime, by Arina Tanemura. Sakura is a princess, engaged to Prince Oura since birth. Since she’s not keen on marrying the prince, Sakura runs away, accidentally looking at the full moon in the process (the one thing she must never do).

Kitchen princess, by Natsumi Ando. Najika is a talented cook, who follows the trail of a mystery boy who touched her heart as a child to the exclusive Seika Academy. Everyone at the Seika Academy is special in some way, except Najika according to the girls there. However, two brothers, Sora and Daichi, know her cooking is magical. (Also, who’s the mystery boy?)

Cardcaptor Sakura, by CLAMP. This was awarded the Seiun Award for best manga in 2001, and was also made into a TV series. The series begins with Sakura releasing the magical Clow Cards, a set of cards with their own personalitythat can assume different forms when activated. Oops. Sakura is told she must now find all the missing cards, battle their magical forms and re-seal them.

Kobato, also by CLAMP. Kobato, mysteriously, has a quest to heal broken hearts by trapping feelings in a bottle, in order to make her way to a mystery place. It sounds daunting, but she does have the help of a grumpy dog called Ioyogi-san, so that’s okay then. CLAMP’s website is here (great for practising your Japanese).

Here’s a list of other manga series we’ve got in the library.