Most. Comic Books. Ever.

There are seventeen new YA graphic novels. Seventeen. Titles and brief descriptions to follow.

X-Men Noir: Mark of Cain, mutated heroes 1940s style.
Spiderman Noir: Eyes without a face, mutated hero 1940s style.
Fall of the Hulks: Prelude, the Hulks begin to fall.
Hulk vs X-Force, heroes square off in Marvel-ous battle. See what I did there?
Four Eyes: Volume One, it’s a dragon with four eyes, not a heroic kid with glasses. A shame.
Daredevil: The Devil’s hand, this is a radically different chapter in our hero’s book.
Siege: Dark Avengers, The Avengers are under siege. When are they not?
Clive Barker’s the thief of always, a haunted holiday house that sucks in children. Scary.
Captain America: Two Americas, imagine if there were two Americas? Six Jonas brothers!
The brave and the bold: Milestone, sounds like a daytime soap. But it’s not.
JSA: Strange adventures, the gang goes on unusual jaunts.
Black Panther: Power, Black Panther is a girl now and she kicks butt.
DC Universe: Origins, how the DC heroes came to be, basically.
Deadpool: Suicide Kings, punching, slicing, shooting, etc.
Superman/Batman: Big noise, when these two get together, cover your ears I guess.
Buffy the vampire slayer: Retreat, Buffy was ahead of it’s time with the vampires and werewolves.

As I was writing this post another twenty-three YA graphic novels arrived, making the title of this post almost immediately redundant. Keep your eyes on this blog and the nifty folder attached to the shelf in Central for all the new stuff.

The Andre Norton Award is part of the Nebula Awards, held annually and organised by the Science Fiction and Fantasy Writers of America. As the name suggests, the awards are for excellence in science fiction and fantasy writing, plus there is an award for film. Award winners will be announced on May 21.

This year’s Andre Norton nominees (books published in 2010) are:

The Ray Bradbury Award for Dramatic Presentation also has some interesting nominees:

Get your art out there

We have the guys from Poppy Dust and Oosh Multimedia with some ideas to help you get your music out of your bedroom and into peoples lives.

Come along to the last of our Urban Survival Series, tomorrow March 30th at the central library from 4-5pm.

First, there’s the new The Three Musketeers film (shot in 3D, the trailer points out).

This one stars Orlando the Bloom, and Matthew McFaddyen (from Spooks, and also a former Mr Darcy). There have been other musketeer movies; from 1933 there’s a black and white version with Lana Turner and Gene Kelly (for all you students of film history – costs $4 for one week on a young adult card). Students of classic literature will want to read the book, The Three Musketeers, by Alexandre Dumas. He also wrote The Count of Monte Cristo, which has also been adapted to film. There you go. Even further sidetracking: this (Monte Cristo) film version features Henry Cavill, who is the new Superman.

The non-superbowl, long trailer of Captain America: The First Avenger:

For people needing to do some Captain America revision, we have lots of comics.

Where She Went, the sequel to the bestselling If I Stay by Gayle Forman (available next month – reserve it now!) has a pretty arty trailer:

We are sad to hear that Diana Wynne Jones, influential author and one of the queens of fantasy, has died. She was the author of many titles including the Chrestomanci series, the Dalemark quartet and others such as Howl’s Moving Castle.

“You’ve no right to walk into people’s castles and take their guitars.”
Howl’s Moving Castle

Here are some new books!

Here they are! Exclaim!

You, by Charles Benoit (223 pages) – Fifteen-year-old Kyle makes some choices that will come to haunt him. In a big way. You are Kyle, in that the book is in the second person, you know? Kyle is a bit of a thug who is turned into a ‘project’ by Zack, who has come from a private school and who may actually be quite sinister.

First lines: ‘You’re surprised at all the blood.‘

The Darlings Are Forever, by Melissa Kantor (328 pages) – The Darlings are some friends who have matching necklaces, a shared motto, and their own table at Ga Ga Noodle. Now they all are heading to different schools in New York City! Will they stay friends?!  I bet the Ga Ga Noodle people want them to.

First line: ‘The Labor Day sun was scorching, and as Jane waited for the light to change,  she could practically hear her dark hair frizzing.‘

You Against Me, by Jenny Downham (412 pages) – Mikey’s sister claims a boy assaulted her, and Ellie’s brother is charged with the offence. Mikey and Ellie are both caught up; he seeks revenge and she must defend her brother. “Brave and unflinching,” says the blurb, along with (the optimistic) “above all it’s a book about love.”

Darkest Mercy, by Melissa Marr (327 pages) – Here it is; the final Wicked Lovely book. ‘The political and romantic tensions that began when Aislin became Summer Queen threaten to boil over as the Faerie Courts brace against the threat of all-out war,’ says the Library of Congress cataloging-in-publication data summary, not incorrectly.

First line: ‘Niall walked through the ruins of the tattoo shop.‘

The Maya Brown Missions : Circle of Fire, by S. M. Hall (291 pages) – Fifteen-year-old Maya’s mum is an intelligence agent, and Maya can’t wait to be one herself. She enjoys assault courses and shooting ranges and maybe Spooks? Not sure on that. Anyway, her mother is kidnapped by terrorists, and Maya, alone, is determined to infiltrate the terrorist cell and rescue her.

First line: ‘Maya opened her eyes to a room full of shadows.‘

Eternal : More Love Stories with Bite, ed. P. C. Cast with Leah Wilson (215 pages) – Here’s a collection of love stories with people being bitten by vampires. The stories are by a who’s who of modern YA authors who write about the supernatural, like Nancy Holder, Rachel Caine and Claudie Gray. And the girl on the cover looks JUST LIKE Buffy to me, do you reckon? Say yes.

6, by Karen Tayleur  (203 pages) – ‘One car. One after-party. Six people, six points of view. But only one outcome.’ The book ends with the outcome (which you might be able to guess) but has an ending that I read several times, it was so powerful. (I only read the ends of books.)

First line: ‘A light drizzle falls upon a car.‘

The Latte Rebellion, by Sarah Jamila Stevenson (328 pages) – Asha Jamison and her best friend sell t-shirts to help fund a post-graduation trip to London. The shirts promote the Latte Rebellion, a club that raises awareness of mixed-race students. But the club goes nationwide, and the peaceful underground movement ‘spins out of control’, and Asha’s ivy league dreams are subsequently threatened.

First line: ‘The jeering male voice came from somewhere behind me, waking me up from a heatstroke-induced doze.‘

First line: ‘It was a Saturday afternoon in early July and I was looking forward to the highlight of my week – the hour or so when Theo and I met online and everything else dropped away.‘

All Just Glass, by Amelia Atwater-Rhodes (246 pages) – Sarah is from a family of vampire hunters. It is a family business! But when she is turned into a vampire by boy she loved (ironically!) she becomes the hunted. By her sister, Sarah, no less, who is made to by her mother. “Aww, mom.”

First line: ‘Saturday, 5.53 a.m. The ringing in her ears was the sound of the world shattering.‘

The Blending Time, by Michael Kinch (254 pages) – In a dystopian future, teenagers are made to perform ‘Global Assignment’ work assignments when the turn seventeen. Three such teens are given what they think is a cushy job; to repopulate and rebuild African, which has been devastated by a solar flare. But it’s not quite the stroll through the rose garden that they thought …

New Zealand designers Stolen Girlfriends Club showed their latest collection at an impromptu show in an Auckland New World supermarket last week.  So, so cool and hilarious! Check out the clip.

Susie Bubble posted about it too, which is pretty awesome. 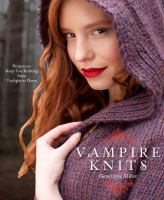 Vampire knits : projects to keep you knitting from twilight to dawn / Genevieve Miller.
Vampire Knits is the first collection of knitting projects for dreamy, mysterious vampires and the fans who love them. From cozy neck protectors to gloves inspired by “Twilight’s” Bella Swann, the projects are fun to make and evoke the spirit of beloved undead characters. Full color.” (Syndetics summary)

There’s no denying the cultural juggernaut that is Twilight. Love it or hate it, book or movie, werewolf or vampire – these are decisions we’ve all had to make at some point over the last couple of years. But vampire, Twilight-inspired craft? A step too far? What do you think?!

Get ‘Em Girls – Jessica Mauboy
What is “’em”? And why
should girls “get” it? Answers are
on track number one.

Glee: The Music, Volume Five
Similar to the
above entry, but with Biebs
instead of the Brits.

The Sing-Off: The Best Of Season Two
I think this is like
American Idol, but
acappella-y.

Who You Are – Jessie. J
Spikily lipped Brit
does the Lady Gaga thing,
only with black hair

The Lady Killer – Cee Lo Green
Despite swearing at
them, it is still possible
to make ladies swoon.

Goodby Lullaby – Avril Lavigne
Still in and out of
love, but with sk8er men, no
longer sk8er bois.

You know how it is, you spent all your hard earned money on a cellphone, and then after six months it stops working!  What can you do? Well the Citizen’s Advice Bureau and the Community Law Centre can help. Come and discover what your rights are at our next session.

We’ll also have the BNZ here to help show you what to do with that money from your part time job, so that you can afford those toys and gadgets!

Here are some book trailers, you guys.

The first one is for a book called The Vampire Stalker, by Allison van Diepen. Vampire fan Amy meets a boy who is, in fact, Alexander, the vamp from her favourite series of books. He has escaped the world of fiction to hunt down Vigo, an evil vampire. It comes out in June.

Here’s a new trailer for the City of Fallen Angels, the fourth book in Cassandra Clare’s The Mortal Instruments series. It’s the first trailer in a series of three, I think?

There’s a new MMO out soon called Star Wars : The Old Republic. A book that ties in with the game is also due out; here is its trailer, which was ‘thrown together’ by LucasArts.

Fury of the Phoenix, by Cindy Pon, is the sequel to Silver Phoenix : Beyond the Kingdom of Xia, and promises to be as ‘epic, romantic, and action-packed’.

And finally! Here’s the trailer for My Life Undecided, by Jessica Brody. It’s also due out in June, which is actually quite a way away, sorry.