What I’ve been reading

I have just had three weeks off so finally a chance to lie on the beach and read through the pile of books that have been sitting on my must read list. These are the books that have stood out for me when reading the many reviews before making the decision to buy or not to buy.  It would be great to know what you think….

In an unnamed third world country three young teens, Rat, Raphael, and Gardo live with thousands of other kids in a garbage dump. They dig through the rubbish looking for anything that could be profitable. One day Raphael unearths a leather bag containing a map, a wallet and a key. Keeping the discovery secret from the police the three boys soon find themselves in a mission involving a secret code, a corrupt politician and a search for six million dollars. The adventure is told through the voice of all characters, including their thoughts, feelings and perspective.

A gripping adventure story while also giving an insight into the lack of social justice that exists in parts of the world. If you enjoyed Slumdog millionaire give this a go.

This is the author’s first novel and has won the Booktrust teenage prize!

It is a very unique story of two teenage orphans, Bob and his sister Marie Claire aka Rat who travel from Canada to New York in search of their uncle. Rat is a funny, football playing, singing, dancing and psychic ten year old and I was entranced.  Bob is her older brother and takes on the role of protector of his ‘crazy’ sister. The story follows the two through New York where they come across some very interesting characters including a drug dealer, up and coming rap-star and thieves. While the story itself is a page turner, for me this book was all about the characters. I would be keen to know what you think!

While Dante is waiting for his A level results he gets an unexpected visit from ex girlfriend, Melanie and her baby Emma. Her reason for the visit is to leave the baby in Dante’s care. All of a sudden Dante’s life is turned upside down as comes to grips with fatherhood at seventeen. As a sub plot Dante learns to accept his sixteen year old brother Adam’s homosexuality. This a genuinely moving story, that explores topics not widely covered in teen fiction.

Most of us know Anne Frank’s story, however this is a novel written from Peter’s point of view, who is also hiding in the annexe with his mother and father. When the story commences Peter is irritated by Anne but finds himself falling in love with her. As a result of his confinement Peter begins to question his religion, wondering why being Jewish has inspired such hatred. Anne’s diary ends in August 1944, however in ‘Annexed’ Peter’s story continues on beyond their betrayal and into the Nazi concentration camp.

While there has been controversy surrounding this book I found it powerful and engrossing.

Hulk. Volume 3, Hulk no more  by Jeph Loeb, Ed McGuiness. Hulk and his buddies, Silver Surfer, Dorma and the other guy have all lost their girlfriends to evil, on their wedding days too! To get them back they must fight Red Hulk, a guy called Tigershark (who has Adamantium teeth!) and two other nogoodniks. Spiderman turns up to crack some wise as well.

A Study In Scarlet adapted by Ian Edington from the original text by Arthur Conan Doyle. Sherlock Holmes gets an action-packed graphic novel adaptation. Follow our tweed-clad hero as he investigates a murder, meets Watson for the first time, sleuths up a storm and smokes a curved pipe.

Witch and Wizard battle for Shadowland by James Patterson. Have you always wondered what happened inbetween the first and second “Witch and Wizard” novels by James Patterson? Now you can find out in graphic novel form. Reviews said things like “basically non-stop action” and “action-packed” so, you know, expect action. Also magic, the protagonists are a witch and wizard after all.

Simpsons comic extravaganza by Matt Groening. Lots of Simpson-y adventures collected in one handy volume. On a related note; what is your favourite Simpsons episode? A friend and I discussed this the other day and it was very difficult to decide. It is a worthy debate that could probably spawn a top ten list…

The Odyssey by Gareth Hinds. Books get adapted into graphic novels all the time, epic poems, not so much. Homer’s The Odyssey is one such instance and it’s rather good too, not only does it practically count as studying for Classics, but it’s entertaining at the same time. Your correspondent awaits a similar version of Chaucer’s Canterbury Tales with baited breath.

Also new this week are Ouran High School Host Club volumes one, two and three. It’s a self-described screwball romantic comedy in which our heroine, Haruhi, must work at a club dressed as a boy in order to repay a sizable debt. Smooth sailing does not follow.

Here are my very important thoughts.

This is how I’d style my perfect boyfriend. (via Isaaclikes.com) 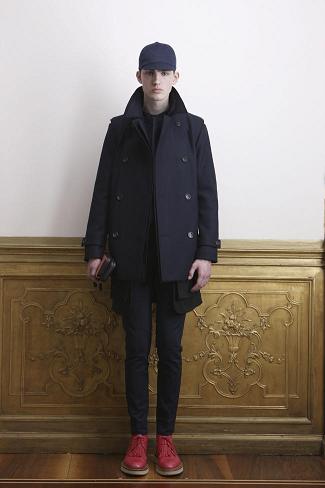 Humour! Console gaming! Gender conformity! Martin Henderson! Fashion! Kung Fu Panda 2! How to make a pompom necklace! All this (and more!) in this week’s new mags.

See Some European Masters for Free

On Thursday the 3rd of February you can see the European Masters exhibition at Te Papa for free: all you need to do is confirm you’re a Wellington resident (your Wellington City Libraries library card will do for this), oh and also be prepared for a queue (especially if you’re going after school)!

See paintings by Picasso, Munch, Renoir and many more: for more information on the exhibition visit the Te Papa site here.

The saga of The Twilight Saga: The Official Illustrated Guide might soon be over! Yes it is true that it now has an official publication date, which is quite soon (April/May), so you can reserve it now.

If you were one of the many who reserved this companion to the Twilight Saga by Stephenie Meyer a couple of years ago only to find publication had been delayed, and delayed again, and then kind of cancelled this will be good news.

Apparently trailers were first shown at the end of films, but because everyone would leave before they played they were shifted to the beginning of the film. But the name ‘trailer’ stuck, otherwise they’d be called, ‘wheelbarrows’ or ‘shopping trolleys’ or something. THE MORE YOU KNOW.

Anyway, here are some book trailers, which really doesn’t even make sense but there you go.

Darkest Mercy, by Melissa Marr, is the last in her Wicked Lovely series. Faeries! Magic tattoos! It’s in the system (on order!) and already has a rapidly growing reserves queue. So. Reserve it now.

Bloody Valentine, by Melissa de la Cruz, is the latest Blue Blood book. It is about rich vampires in New York, thereby covering two fairly popular genres at once. The vampires are all falling in love, hence the clever title. (We don’t have it yet, but we will.)

And here is Blessed, by Cynthia Leitich Smith. It is released today! It is the third in the Tantalize series, also about vampires. Vampires! So in right now.

If you’re a Dessenite, then make sure that you reserve her soon-to-be-published (May, that is) book What Happened to Goodbye. Maclean and her father move to a new town after a horrid divorce, and she starts feeling at home (with the help of Dave, but with also a few lingering doubts and questions). Find out more about it on Sarah Dessen’s Ning (or Ning page: I don’t know what to call it!) at Sarah-Land.

Also, for Libba Bray fans, there’s Beauty Queens (cool cover). It’s not listed yet on the books page of her site (but I just stuck this link here anyway, for you to click on the big cow, and again, and again), but it will be available in late May/early June. A bunch of beauty queens end up stranded on a desert island (thanks to a plane crash). I like the product description (sourced from amazon.com): “Mysteries and dangers. No access to email. And the spirit of fierce, feral competition that lives underground in girls, a savage brutality that can only be revealed by a journey into the heart of non-exfoliated darkness. Oh, the horror, the horror! Only funnier. With evening gowns. And a body count.”

And Another Global Competition

The 90 Second Newbery Film Festival is a worldwide competition in which entrants get the chance to condense a classic Newbery medal winning (or honour) book (see here for a list) into a 90 second dramatisastion.

It’s a (very little) bit like writing a haiku of an epic classic, but involving more effort and equipment, and the chance that your offering will be shown at a glitzy event at the New York Public Library. Deadline: 15 September 2011.

The first entry, for A Wrinkle in Time by Madeleine L’Engle is here.

Thanks to the people at the National Library (NZ) for pointing this one out.

Prom is an upcoming teen-dramady with a self-explanatory title. Boy trouble, anxiety, secrets, anticipation and apparently a fire are all on the cards. Opening June 2nd, official trailer below…

Also coming in June (the 16th to be more specific) is The Green Lantern. Starring Ryan Reynolds and featuring Taika Waititi and Temuera Morrison, it looks to be an action filled romp (obvs) and is also presented in 3D in selected theaters (again, obvs). Official site here and trailer below…