3.17pm – This isn’t particularly relevant to the actual race, but we had to take this picture of a library staff member’s lunch bowl that has been kidnapped for teen events in the past. Said library staff member was determined that this wouldn’t happen again: 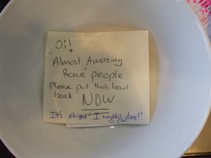 It’s a very nice bowl indeed and we can report we didn’t use it except to take its picture.

3:08pm – Yes, it took me this long to upload the video to youtube. No, I am not happy with my myriad of technology today. Oh well, here it is…

2.06pm – Report from compulsory pit stop (photos to follow): several teams crashed a family barbecue and got free sausages (our thanks to the generous family). One team have found an interesting mascot in the form of a live rat (found asleep on the road). Thanks to the Red Bull and SmokeFree and Push Play teams for their efforts at the pit stop. 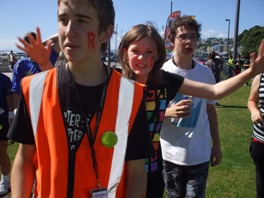 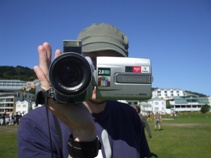 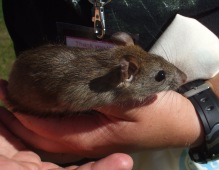 2:00pm – After a lot of false starts, incorrect cables and uncooperative technology I’ve finally edited the start of the race into a youtube clip. It shall be posted with the quickness.

1.27pm – Our spies around Wellington report that a couple of teams may have walked straight past some vital clues. We at race HQ hope that teams are being as savvy as possible! A text from another team: “We r gr8 jst got off cable car”.

Jack’s only taken about 2 hours to work out that the one cable for the video’s not doing the job. So, cherry tomatoes to Jack (new eating game: a cherry tomato for problem solving). The promised YouTube clip is now looking a wee bit more promising.

12.45pm – The compulsory stop is at 1.30pm, and will be at Waitangi Park. Everyone will get a free Red Bull which will doubtlessly fill them with energy. More photos to come!

While we were eating a team walked past briskly with a Wellington map book – kudos for practical thinking. Reports suggest teams have made it as far as the airport.

Jack’s in the middle of compiling a YouTube clip of the race start. I hope you’re impressed with our Web 2.0-ness. 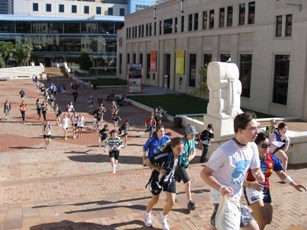 11.16am – It’s started and they’re racing! Contestants had to run from the library and grab their tasks by the pyramid at the back of Civic Square – look at them all.  (Sorry to the man in the cafe! Libraries usually are quiet.) 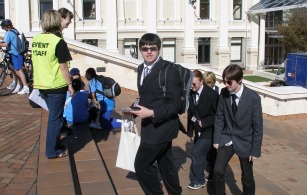 Loads of people are wearing costumes. 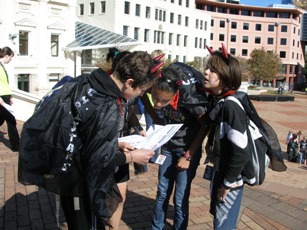 If you’re wandering around Wellington and people are being a bit odd now you know why.

Ella hasn’t said lanyard yet so no chocolate. We’re miffed. We’re off for brunch. See you later.

10:34am – Simon, Grimm and I have decided we’re going to eat a chocolate every time Ella says lanyard, you must play games like this when liveblogging. We will enjoy this. 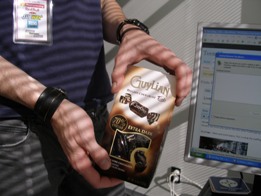 10.27am – More and more teams. This is what the staffroom is kind of looking like now: 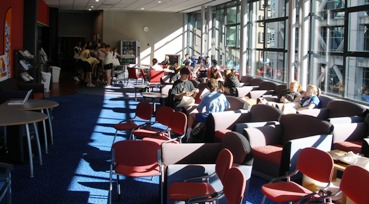 The multiboard was found. Jack’s in charge of music of course. He said: “I’m just going to play what I want.” We’re hoping this is favourable. One team has bodypaint. Interesting.

Simon: “Do you think they will mind if I have a muesli bar?” (see previous food photo). So he takes one. Ella (race mastermind): “What are you doing?”.

10.05am – First team up! Plus two more. People at race HQ are trying to find a multiboard. Where are they when you need them?

9.49am – It’s almost time for the Almost Amazing Race to begin. Already there are some teens lurking in the library, which is a hopeful sign – over sixty have registered, so it should become quite crowded soon. And there’s no rain! 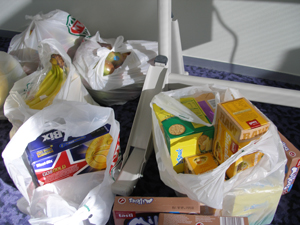 We will liveblog the entire event in this post. Refresh (F5) often! Here’s a tiny photo of all the packs and lanyards everyone gets, and there’s another even tinier photo of some of the snacks etc. Squint. Yum, Weetbix.