Since, you know, people like statistics (except as a school subject). Here are some facts:

First Place: Team AXD (we should have put pedometers on them)
Second Place: The Bananaramas (fab)
Digital Camera (donated by Noel Leeming yay Noel) Winner: Angelica (hope you enjoy it)
Best Costume: The Extreme Team (in their suits and sunnies)
Best Recycled Mascot: Flurple (with their purple flag thingy)

Will we be doing it again next year? We’d really like to think so, since it was, you know, a blast. Here’s hoping. In the mean time, keep checking in here for news of more library events, happenings, competitions and things like that.

It’s true, I love Megan Whalen Turner’s books, specifically the series beginning with The Thief. Trouble is, I’d love to be able to tell you all about it, but that’s very difficult, since there’s a rather large twist in The Thief which the other two build on, so I just have to say: you should read it! Trust me!

A summary (without giving anything away) – it’s notable for its really clever writing; vivid narrator with a keen sense of irony; fantasy world based on Ancient Greece (although set in more Byzantine times (with guns and stuff)); swords!; and of course a great twist that will make you want to read it again so you can see all the obvious hints you missed the first time around because you didn’t know any better. It really is very clever. Whatever you do, you have have have to read them in order: The Thief; The Queen…; The King… and you have have have to read them, so reserve them now.

Plus a piece of trivia:

Being a woman of good taste, MWT is a fan of Diana Wynne Jones* , and she has inserted a Howl’s Moving Castle quote into The Thief and The King…, if you see below –

“My youngest is down in the prison” says the landlady…

“Oh,” I said, not surprised. They probably hadn’t bribed the tax collector enough. “Don’t worry too much,” I said as the magus dragged my horse away. “It’s not so bad.” …

“What a lie that was,” I added under my breath as we left the inn behind.

“Who, me?” said Howl. “I assure you, my friends, I am cone sold stober.” He got up and stalked upstairs, feeling for the wall as if he thought it might escape him unless he kept in touch with it. His bedroom door did escape him. “What a lie that was!” Howl remarked as he walked into the wall. “My shining dishonesty will be the salvation of me.”

For fans: check out the community (beware spoilers!), plus there’s another book coming out next year apparently.

* My copy of The King of Attolia has *extras*, including a list of books she recommends (she recommends The Eagle of the Ninth by Rosemary Sutcliff, for example).

END_OF_DOCUMENT_TOKEN_TO_BE_REPLACED

Some of you may have had My Little Ponies when you were growing up – but they probably didn’t look like the ones in this new collection! The new range, designed by Mari Kasurinen to resemble characters from movies, are selling for £330 each, so start saving I guess. My favourite is the Joker one, miss u sooo bad Heath. I wonder if the Care Bears are in line for a similar makeover?

What’s making the news in the book world at the moment?

If you’re a fan of the House of Night series by P.C. and Kristin Cast check out this article on their latest book, Hunted (which we currently don’t have but will soon). You can also listen to the second chapter, courtesy of MacMillan Young Listeners.

Hot on the heels of Charlie Higson’s popular, specially commissioned Young Bond series (about James Bond when he was studying at Eaton and shortly after), there’s going to be a Young Sherlock Holmes series too (the Guardian again). I’m guessing he won’t be smoking his pipe, but the hat’s actually quite voguish now, and a younger Watson might have a few more clues. Haven’t read The Great Adventures of Sherlock Holmes yet? Perhaps you should.

(For more classic books in the YA collection don’t forget to visit our classic books book list, complete with plot summaries in haiku.)

The Almost Amazing Race (did you see the article in this week’s Capital Times?) is only a couple of days away. If you’ve registered and sent back the form (signed by a parent or caregiver) that’s great – we are all ready for you. If you haven’t yet posted it in, do bring it in on the day*, as we don’t get our mail on the weekend.

*10am at the Central Library!

And! If you still want to register you can. We will email you the forms to bring back on the day. Or else just come in and join up on the day, though we will need a parent/caregiver signature – otherwise you can’t do it! Which would be a pity.

Jack, Grimm, and I will be live-blogging the event on the day. So exciting.

Where Are The Wild Things?

In Isn't that cool?, Jack, Movies

In theatres October 16 is where. Nearly everyones favourite picture book Where The Wild Things Are by Maurice Sendak is getting a big screen adaptation and somebody just emailed me this link where you can watch a very cool trailer. I know I’ll be off to see it when it comes out! 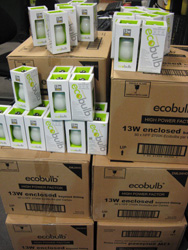 This Saturday at 8.30pm is Earth Hour, which means that you should switch off your lights (presumably you can keep your computer/console/television on). I wrote about it last week, and embedded a rather neat Youtube channel.

Currently we’re giving away Ecobulbs – lightbulbs that use up less power than your standard, usual lightbulb and are made from recycled materials – to anyone who asks for them, really. So if you want a free lightbulb come on in!

The deal will last until tomorrow or at least until they run out (and we have a lot). See the awesome photo.

Word is that the Maximum Ride series of books is to be turned into a film series. But will it be the next Twilight? Perhaps not, but it will still be very popular. It may be the next Harry Potter, which would be pretty good – I’m a fan. It’s due out in 2010.

Maximum Ride is a series of five books set in a world where a group of students are part human, and part bird, and must save the planet from mysterious figures. We have them in the library catalogue here.

Saturday is D Day remember for the Almost Amazing Race.

1) Library cards. It is highly probable that having a library card (a Wellington City Libraries card, that is) may well earn you some valuable bonus points. In fact, the more team members with library cards the better. If you are registered for the Almost Amazing Race and you don’t have a WCL library card and you would like one (but you just haven’t got around to it yet) there’s still time between now and Saturday! Visit our joining page for info on what you need to do.

2) Bus bus. A quick hint from Ella, race mastermind: you can get a group daytripper bus pass thingy for $12.00 – this would cover all four of you for the whole day. Group passes can be bought from the bus driver (on the bus). This may well come in handy, but isn’t essential/required.

Finally, if you’ve preregistered and haven’t quite got around to sending in your signed confirmation back to us yet: don’t forget!