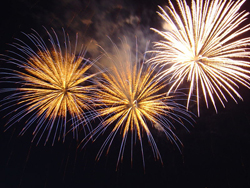 Ending the Year on a Vampiric Note

We’ve made a resolution (I’ve just decided) to expand horizons in 2009, so I thought we’d get one final vampire post out on the last day of the year, since 2008 seems to have been the Year of the Vampire. So for people stuck for something to read, here’s a couple of things to note:

1) A most thorough website. Lovevampires.com is a site devoted to vampire fiction. It looks pretty good and it seems to have reviewed every single vampire story ever written. If you get sick of reading the reviews you could also check out some author interviews, including, for example, P C Cast. Read their summary of 2008 too; see if you agree. I like the blood spatter image that shows up to highlight hyperlinks.

2) Some suggested reading to keep you going… check out some of the following if you haven’t already. The Marked series by the aforementioned P C Cast; Vampire Academy books by Richelle Mead; The Summoning by Kelley Armstrong (the next one’s due out next year); The Mortal Instruments series by Cassandra Clare (again, expect to see book three in 2009).

Thanks to Renee for the tips! Thanks also to Esther for letting us borrow her photo and dubiously link her with this genre.

We all know that January 1 is New Years Day, but did you know that Jan 1 is also Global Family Day – “One Day of Peace and Sharing for all faiths, cultures, races, nationalities and economic classes”?

Global Family Day (GFD) was first celebrated, with the dawn of the new millenium, between Israeli and Palestinian families in the refugee camp of Nablus.  Later, when it was noticed that the century had begun remarkably calmly despite widespread apprehension (fears of terrorism, the “Millenium Bug” and the like), the United States Congress unanimously voted to establish January 1 as a special time of peace and sharing.  In 2001 the United Nations General Assembly passed  UnRes. 56/2 recognising GFD and encouraged all its Member states to observe the holiday.  It’ll be interesting to see, with tensions running high in the Middle East, what impact GFD will have this year.

Maximum Ride fans will be pleased to know that the next instalment, Max, is due out in April 2009. Our onto-it buyer has placed an order already, so you can reserve your copy now.

A couple of random things:

Visit the Maximum Ride website where you can join the flock and also see an animated preview/advert for The Dangerous Days of Daniel X.

There’s going to be a Maximum Ride movie, scheduled for 2010, which in a few days will be next year.

The teen blog, personable thing that it is, wishes a very happy Christmas to you and your friends and family!

We’ll see you in a few days.

Librarian’s Choice Best of 2008: other picks

Other books that we liked but were too busy to review include:

The Graveyard Book, by Neil Gaiman. Fantastic reworking of The Jungle Book. Colourful characters (‘May they rest in peace‘); great writing (being Neil Gaiman); one fantastic vampire (Silas).

The Hunger Games, by Suzanne Collins. In order to spare her sister, Katniss volunteers to take part in the annual Hunger Games, a grim fight to the death in front of a television audience of thousands. The first part of a promised trilogy.

It’s been a good year.

This is the last time, I promise! Just to let you know you’ve got until 12pm today to get your short story in! (Email them to teenblog@wcl.govt.nz.)

My Father’s Son, by Terri Fields (259 pages) – what would you do if you were an average teenager who turns on the TV to discover that the face of a notorious serial killer shown on the news is actually your father?

Ice Claw, by David Gilman (434 pages) – the second Danger Zone book (after The Devil’s Breath). Max is trying to win an X-treme sports challenge, except at the top of a freezing mountain he finds he’s actually just trying to survive. With prophecies and cataclysmic ecological events thrown in. Heaps of action, obviously.

First sentence: ‘It was too beautiful a day to die.’

Top 8, by Katie Finn (304 pages) – someone hacks Madison MacDonald’s online profile and her life is turned upside down. Who did it? Because that’s just mean.

The Haunting of Nathaniel Wolfe, by Brian Keaney (233 pages) – Nathaniel’s father is the greatest medium in London, but is he dabbling in things he shouldn’t? The back cover says the book is “a thrilling story of the supernatural set among the winding streets of Victorian London.” I think that might be a pun… winding… ghosts…

First sentence: ‘It was a grimy March day and the smoke from hundreds of chimneys mingled its sooty breath with the mist that came drifting up from the river.’

Vibes, by Amy Kathleen Ryan (249 pages) – Kristi can hear what people are thinking, which makes being a teenager kind of complicated (not great for your self-esteem when you can hear what the hottest bimboy in school thinks of you), especially when her father, who left two years ago, reappears ready to, well, be her father again.

First sentence: ‘It isn’t easy being able to read minds.’

Last Kiss of the Butterfly, by Jill Hucklesby (287 pages) – Jaz is a London girl and proud of it, but her mother – who has cancer – wants the two of them to spend a final summer in a cottage on the marshes. Not quite what Jaz wants, until she meets Ethan, who’s quiet but a bit of a stunner.

First sentence: ‘Here with me.’

Hunting Elephants, by James Roy (339 pages) – Harry’s Uncle Frank’s Vietnam War experiences threaten to exacerbate family tensions. And! There may be a crazed gunman in the bushes.

The Celebutantes : In The Club, The Celebutantes : To The Penthouse, and The Celebutantes : On The Avenue, all by Antonion Pagliarulo (327, 356, and 340 pages respectively) – The Hamiton triplets are named Madison, Park, and Lexington, and are rich heiresses living in New York. Sort of like the Gossip Girl books, but with richer, more famous girls.

First sentences (in order): ‘She reached for her sunglasses.’ ‘The Ambassadors for the Arts Luncheon, held annually in the legendary Conrad Suite of the Waldorf-Astoria hotel, had officially begun.’ ‘Night fell cool and crazy over Manhattan, the streets buzzing with the first hint of spring.’

Antsy Does Time, by Neal Shüsterman (247 pages) – Fourteen-year-old Ansty (short for Anthony) learns about life when his terminally-ill friend (with the awesome name, Gunnar Ümlaut) feels hopeful for the future.

First sentences: ‘It was all my idea. The stupid ones usually are.’

Into the Dark : An Echo Falls Mystery, by Peter Abrahams (262 pages) – Super-sleuth Ingrid Levin-Hill finds a body while out snowshoeing (which is when you walk on snow while wearing shoes that resemble tennis racquets). Unfortunately, the body is on her grandfather’s land and he’s sent to jail. Ingrid needs to uncover the past to find out the truth.

Gay America : Struggle for Equality, by Linas Alsenas (160 pages)[Non-fiction]  – This is an extensive and very interesting history of gay rights in America, written for teen readers.

Let it Snow: Three Holiday Romances, by John Green, Maureen Johnson, and Lauren Myracle (352 pages) – There are three stories in this book about high school romance. Although written by different authors the stories are connected. As the title suggests the stories rely rather on a white Christmas – but we’re used to that.

First sentence from each story: ‘It was the night before Christmas.’ ‘JP and the Duke and I were four movies in to our James Bond marathon when my mother called home for the sixth time in five hours.’ ‘Being me sucked.’

A World Away, by Pauline Francis (316 pages) – Nadie is an American Indian girl who is taken by the early settlers of America back to England, to display to Queen Elizabeth I. There she falls in love with Tom, a blacksmith; can he survive with her, back in her own country? I could tell you … but I won’t.

First sentence: ‘Flames light the length of my mother’s body and lick around her slender neck.‘

The Mendini Canticle, by Brian Keaney (201 pages) – This is book three in the science fiction series, Promises of Dr Sigmundus.

First sentence: ‘The storm that had raged over the south of Gehenna had finally blown itself out.’

Crowboy, by David Calcutt (233 pages) – A war-torn city with gangs of warring children. Sort of a cross between Mad Max and Lord of the Flies, according to Amazon (where it reviews well).

First sentence: ‘So I’m outside the city one evening on me usual rounds, sorting through the leftovers and picking me way through the day’s dead.‘

Drawing Words and Writing Pictures : Making Comics: Manga, Graphic Novels, and Beyond, by Jessica Abel and Matt Madden (282 pages) [non fiction] – This is a ‘definitive course from concept to comic in 15 lessons’. It’s a very, very nice book, laden with illustrations and guides. I’d go so far as to say that it’s the definitive book for people wanting to write and draw their own comics.

Favourite line: “That’s a lot of chutzpah you’ve got there. Don’t let it weigh you down.”

Frankie’s a fifteen year old girl with a brain and gumption, but the people around her don’t seem to notice this. She’s “Bunny Rabbit” to her family and “adorable” to her boyfriend. Frankie’s not the kind of girl to let that slide and let people take care of her, though. She embarks on an ambitious project to prove herself – to herself as much as anyone else, possibly – with astonishing success, but unfortunately she lands the Loyal Order of the Basset Hounds (an exclusive all-male secret society) in some strife in the process, the undoing of which could be the real making of Frankie.

The Disreputable History of Frankie Landau-Banks is a great book; thoughtful, philosophical, clever and hilarious. Frankie is the real female hero of 2008 literature.

If you’re into chick lit then you really have to read E. Lockhart. She’s a totally ept writer; reading her books leaves you feeling turbed and gruntled.