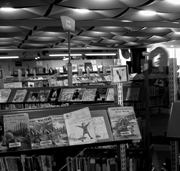 That’s spooks in the ghost sense rather than spies. Ghosts lend themselves to short stories apparently (think Edgar Allan Poe) – maybe their lack of substance means they lack staying power. That being said, ghosts have had an impact on several novels as well, from the ghoulish-minded 19th Century to the ghoulish-minded Neil Gaiman (absolutely no offence meant).

It will probably be sunny all weekend, but that’s no reason not to stay indoors and play these great online flash games.

Fold – you’re an ant with the ability to create gravity wells so as to avoid … well, death. It’s a bit tricky to get the hang of it, but not too difficult.
99 Bricks – It’s the opposite of Tetris. Frustrating!
QWOP – I was terrible at this incredibly difficult racing game.
Run – Great fun! And addictive too, in the good way that some games are.
Amorphous Plus – Kill the gloobies with a big sword! (Not as violent as that sounds.) We liked this one – it’s very satisfying.
Physics Invader – Old-school Invader, but with physics!
Wooden Paths – Build wooden bridges across rivers – curiously engaging and relaxing.
Aether – once you’re sorted (it’s quite hard to get off the planet) this game is kind of serene.

See these earlier posts (here and here) for more games!

There’s not a lot of new material this week, so I’ll bundle it all up into one post. First up; new books!

Fruits Basket #21, by Natsuki Takaya (181 pages) – The Sohma family are each possessed by an animal from the Chinese zodiac, and if they’re hugged by the opposite gender (or get stressed out) they turn into that animal. Fruits Basket is one of the best-selling shōjo manga in the world; ‘shōjo manga’ is manga marketed towards teenage girls.

Kekkaishi #14 (and #15), by Yellow Tanabe (162 pages) – Kekkaishi are demon-hunters who use magic to create barriers in creative and interesting ways. This is shōnen manga, which is manga marketed for boys between 8 and 18.

The Latent Powers of Dylan Fontaine, by April Lurie (211 pages) – Fifteen-year-old Dylan’s life is in shambles; his mother may have run off, his father is never home, his older brother hangs out with his loser band, and he – Dylan – has just been caught shoplifting underwear. Also, his best friend is shooting a documentary about him and she (unfortunately) wants to remain his friend.

Finnikin of the Rock, by Melina Marchette (398 pages) – This is the latest from the author of Looking for Alibrandi, (a very popular book still, fifteen years after its publication). Finnikin of the Rock is a character-driven fantasy novel. ‘A long time ago, in the spring before the five days of the unspeakable, Finnikin of the Rock dreamt he was to sacrifice a pound of flesh to save the royal house of Lumatere.‘ How’s that for a first sentence?

Jane Eyre (M rated) – A retelling of Charlotte Brontë’s classic novel from the BBC.
Appleseed : Ex Machina (M rated) – This is the sequel to the pretty-good-but-not-as-good-as-the-manga-I-thought film we also have in the YA DVDs. Reviews suggest that the CGI is fantastic, although the story lets the film down. I shall watch it this weekend (and compare it to Final Fantasy : Advent Children, the best CGI film ever).

Now That’s I Call Music 28 – Various. There are three things in life that we can’t get away from; death, taxes, and Now That’s What I Call Music compilations. This CD has eighteen tracks.
Funhouse – Pink. This is Pink’s fifth album. She may be touring NZ next year. 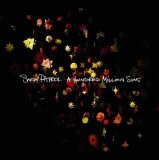 Hey, if you want to listen to the new Snow Patrol CD (A Hundred Million Suns) before buying/downloading (legitimately) it, then you can reserve it now and listen to your heart’s content. One of the back room elves has just this minute finished its catalogue entry.

Okay, here’s a link to an entertaining article about the Twilight movie from the December issue of Vanity Fair (we’ve also got the magazine in the library).

Roger Ebert, film reviewer extraordinaire, had this to say about the movie. Note he’s about as far away from a 16 year old girl as a person can get, but I thought his review was a good read (“Why do girls always prefer the distant, aloof, handsome, dangerous dudes instead of cheerful chaps like me?”).

For more photos from the VF photo session session check out the outtakes.

Wellington City Libraries has access to a whole range of databases (located in mygateway) that don’t get used nearly enough, so we thought we’d highlight some for you so you can have a go. First up I thought I’d find something not too study related: Fiction Connection. This one’s at the top of the Books & Authors list in My Gateway (you need to use your library card number and last name as username and password).

Fiction Connection is a stupidly easy to use tool (it’s also got a quick tour, just in case). You search for an author or book title and get a list, as per your average library database (in fact it uses Aquabrowser, like our Easyfind search), then you can hit the “find similar” button to (as the name suggests) find similar titles. For example, I was told if I enjoyed Nation by Terry Pratchett then I might like to try Mortal Engines by Philip Reeve or Apocalypse by Tim Bowler (which we don’t have, oops) or, or…

You can get fancy and refine your search, for example by location, setting, time frame, topic, or you could just use it like a slightly rigged lucky dip.

You’ll never run out of things to read this summer.

Here are ten twelve popular books that are being turned into movies, which you may or may not know about. Let me know if you know of any others.

So there you go.

The Leonardo da Vinci Machines Exhibition is on at the New Zealand Academy of Fine Art until 15 February. A collection of over sixty machines based on his sketches, this exhibition looks pretty cool. The website says that it’s interactive, so you get to pick up some of the models to get a better look (although I suspect you probably don’t get to have a go with his hangglider).

New CDs and new DVDs – can there be no greater thrill? There are a few blockbuster films included in today’s line-up. And only one CD.

Doll Domination – Pussycat Dolls. Incredibly, this is only their second studio album. This copy comes with a “bonus” CD containing one solo track from each member of the group.

And the DVDs are:

The Simpsons : Around The World in 80 D’ohs
The Simpsons : Treehouse of Horror (V, VI, VII, and XII)
Indiana Jones and the Kingdom of The Crystal Skull – This is the fourth Indiana Jones film. It was co-written by George Lucas, who reportedly wanted it to have more aliens.
Drillbit Taylor : Budget Bodyguard – Three kids hire a cheap soldier-of-fortune, played by the very funny Owen Wilson, to take revenge on their two bullies.
Doctor Who : Series 4 Volume 3 – This has three episodes; ‘Silence in the Library’, ‘Forest of the Dead’, and ‘Midnight’.
The Incredible Hulk – This is the 2008 film, which gets a Metacritic score of 61 – as opposed to the 2003 film, which only gets 54.

Inspired by Grimm’s post about first lines (and the follow-up), this week’s New Book post will also include the featured books’ first lines.

Goodbye Jamie Boyd, by Elizabeth Fensham (88 pages) – ‘Before I killed him, my big brother was my best friend.‘ How’s that for an opening sentence? This book is about friendship and mental illness; it is written in poetic verse.

Ten Cents a Dance, by Christine Fletcher (356 pages) – ‘We heard the music even before we got to Union Hall.‘ It is the 1940s in Chicago, and 15-year-old Ruby finds herself swept up in the dodgy world of dance halls, jazz, and the mob.

Getting the Girl : A Guide to Private Investigation, Surveillance, and Cookery, by Susan Juby (341 pages) – ‘I was sitting on the old blue beachers with Dini.’ (A bleacher, interestingly, is what those tiered benches at sport grounds are called in the U.S.) Sherman Mack’s friend Dini is in danger of becoming ‘d-listed’ by someone at their school. Determined to uncover who is responsible, Sherman ‘snatches up his surveillance gear and launches a full-scale investigation’. Part comedy and part mystery.

Blue Sky Freedom, by Gaby Halberstam (272 pages) – ‘It was the first day back after the Christmas holidays; my satchel was so stuffed with books it was creaking.’ This is a story of love, loss and courage set against the backdrop of apartheid-torn South Africa.

Spray, by Harry Egde (279 pages) – ‘Someone was after him already.’ Two-hundred teenagers sign up for an assassination game using water pistols that will last three weeks. Which sounds like a lot of fun, I reckon. This game, however, becomes more than harmless fun for some of the participants.

Infamous : An It Girl Novel, by Cecily von Ziegesar (240 pages) – ‘It was unnaturally quiet in the main reading room in Sawyer Library on the Wednesday afternoon before Thanksgiving.’ This is the seventh book of the It Girl series, an off-shoot from the incredibly popular Gossip Girl series. (Coincidentally, I’m writing this in a library on the Thursday afternoon before Thanksgiving, although it’s not unnaturally quiet.)

The Singing : The Fourth Book of Pellinor, by Alison Croggon (486 pages) – ‘A shepherd was gathering firewood by the old Pellinor Road when a strange sight caught his attention.‘ This is the final book in the series, so if you’ve been reading this epic, ‘post-Tolkien’ book series, you will definitely want to read this. It has quite a few reserves already!

Melting Stones, by Tamora Pierce (312 pages) – ‘”Hey, kid – stop hanging off that rail!” A sailor, one of the women, was yelling at me.’ The newest Circle of Magic fantasy by one of the genre’s top writers.