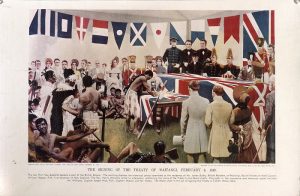 Image: Reconstructing the signing of the Treaty of Waitangi by Marcus King from Archives New Zealand on Flickr. 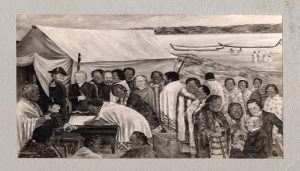 Image: The Signing of the Treaty of Waitangi by Ōriwa Haddon from Archives New Zealand on Flickr.

What is Waitangi Day?

Waitangi Day marks the anniversary of the initial signing of the Treaty of Waitangi. on 6th February 1840. The Treaty is the founding document of the nation and an agreement, in Māori and English, that was made between the British Crown and about 540 Māori rangatira (chiefs).

Did you know? The first Waitangi Day was not celebrated until 1934, and it was made a national public holiday in 1974

What’s on this Waitangi Day?

Where can I find information about Waitangi Day?

This book is about New Zealand. It tells us about the first Maori settlers to the Pakeha settlers to today. It includes information about transportation, employment, and food introduced here, I really enjoyed this book as I learnt a lot. It is also about my country.

Kei te pēhea koe? = How do you feel? / written and illustrated by Tracy Duncan.

I gave this book five stars because you can learn to say your feelings in Maori .

Reviewed by Brooke from Miramar and Seatoun School , 9 years old

Kei te pēhea koe? = How do you feel?, written and illustrated by Tracy Duncan

I think that this the perfect book for young children learning Maori.

Reviewed by Laura from Miramar and Seatoun School , 10 years old

I thought that this was an interesting book and if you like learning about the Maori culture then you will like it.

Reviewed by Laura from Miramar and Seatoun School , 10 years old

We’re currently in the Matariki season – Happy New Year! Here are some great reads you should pick up from the library: 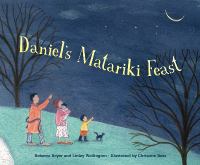 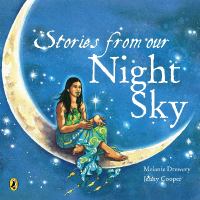 The taniwha of Wellington Harbour, by Moira Wairama (1952-)

I thought it was a very interesting book because the taniwha were quite detailed. Everything in the book was detailed.

Maui : legends of the outcast : a graphic novel, by Chris Slane

I like it because the giant naked woman has barracuda teeth.

“Conrad Cooper needs a favour. He’s just found out about Tāne, the god of the forest, and he’s decided that Tāne is the perfect guy to solve Conrad’s family problems. After all, the more high-profile gods probably have huge waiting lists, right? In return, Conrad will do anything, no matter how much trouble it causes. But will a Māori god listen to the prayers of a ten-year-old Pākehā boy? And does Tāne really exist? Set in 1978 against the Bastion Point occupation”–Back cover.

You Choose….Mayhem at Magic School by George Ivanoff

You are an ordinary kid – or so you think. Strange things start to happen. You make a rabbit appear from underneath your Teacher’s hat. Then you dream about a mystical diamond and a mysterious old woman with long white hair. It turns out you have magical powers… Do you try to keep your talents hidden, or do you go off to magic school? You choose…

George and the Unbreakable Code

by Lucy and Stephen Hawking

George and his best friend Annie haven’t had any space adventures for a while and they’re missing the excitement. But not for long . . .Seriously strange things start happening. Banks are handing out free money; supermarkets can’t charge for their produce so people are getting free food; and aircraft are refusing to fly. It looks like the world’s biggest and best computers have all been hacked.George and Annie will travel further into space than ever before in order to find out who is behind it. – (www.Goodreads.Com)

There Will Be Bears by Ryan Gebhart

Thirteen-year-old Tyson sneaks off with his roughneck, but ill, grandpa to go on his first elk hunt, amid reports of a stalking man-eating grizzly.

Professor Rooster needs a new elite chicken squad. But the three feather-brained young chickens he is sent are hopeless. The youngest, Agent Cluckbucket, is the worst of the lot! Unfortunately, it’s too late to recruit any-birdy else, and danger lurks in the deep dark woods. Will Agent Cluckbucket and the squad be able to work to defeat the greatest enemies of birdkind?

Have you ever visited the Newlands Community Centre? It’s really cool and they always have fun stuff happening. Here’s what’s coming up:

– Join us for a weaving session with Ngā Hau e Whā o Paparārangi Marae’s rāranga (weaving) group. We will be making putiputi (flowers) and Taonga Takaro (toys). A koha towards the rāranga group would be appreciated. Wednesday 12 June, 6.30 – 8.30pm