Judy Moody and the not bummer summer, by Megan McDonald

Learn how Judy Moody hates to be bored in summer. Her friends are leaving her to have a bummer summer. Readers should be 6 years and older

This book is awesome! The story is about how stink wants snow for Christmas and how this mail guy said it is most likely to snow. He said is name was Jack Frost, but Judy doesn’t believe stink. And at the end something delightful happens…

Here’s a joke: Why did the librarian slip over? Because she was in the non-friction section!! Get it?

No one like falling over, so we aren’t going to talk about non-fiction today. This post is all about FICTION.

We love fiction, you love fiction, everyone loves fiction! So here are the most popular children’s fiction authors for this month, based on how many of their books have been borrowed from the library.

11. Roald Dahl (Charlie and the chocolate factory and other funny tales) 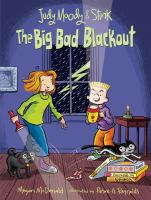 I liked this book because its cover is glow in the dark, the pictures are colourful and the story is about a storm. The story is about a Big Bad Blackout!!!!!!!! Judy and Stink find out that the cabels are cut and there is no electricity but they do lots of fun stuff. What will happen next?

Reviewed by Tulip from Newtown and Berhampore School , 9 years old

Judy doesn’t want to get for the first day of school,let alone brush her teeth or comb her hair!!
This was the first judy moody book I ever read. I liked it very much. Judy isn’t in the mood to go to school but when she finds out about a me collage she thinks that maybe third grade isn’t going to be that bad but Is she right? Read the book to find out.

coooool boook
i recommend this for the
gender: boys an girls
ages: 7-11

Judy Moody M.D. : the doctor is in!, by Megan McDonald

hahaha AWESOME
Love it
recommend for girls the ages 7-11

1.   Diary of a wimpy kid series by Jeff  Kinney

7.   Harry Potter and the philosopher’s stone by J. K. Rowling

9.   The house of Hades by Rick Riordan

10. Return of the vampire by Geronimo Stilton

Wonder no more! Here’s a list of the 25 most popular authors for the last month or so, based on how many times their books have been borrowed from Wellington City Libraries.

9. Roald Dahl – classic laugh-out-loud funny fantasy stories, many have been made into movies too!

11. Jeff Kinney – author of the Diary of a Wimpy Kid series.

14. Sally Rippin – author of the Billie B. Brown series, great for younger readers

15. Rick Riordan – author of the Heroes of Olympus series and others, great fantasy adventure based on Greek, Roman, and Egyptian myths

18. Dav Pilkey – author of the captain Underpants series, great for those who like disgusting humour

21. Cressida Cowell – author of the How to train your Dragon series, which has been made into a popular movie too.

22. Emily Rodda – an author who has written many fantasy adventure series, including Rowan of Rin, Raven Hill Mysteries, and Deltora Quest.

25. Lemony Snicket – author of the zany series A Series of Unfortunate Events

You can search for these authors in the library catalogue. Which one’s your favourite?