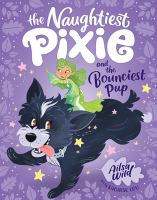 The naughtiest pixie and the bounciest pup / Wild, Ailsa

I liked this book because of the cute puppy in it that got up to mischief. Jenifry Star is a pixie that can magic herself into a human and goes to school. This book is funny, exciting and easy to read.

Reviewed by Jessica from Tawa and , 9 years old

The battle for Crystal Castle : the thirteenth adventure in the Kingdom of Fantasy / Stilton, Geronimo

Dawn is so cute!

Reviewed by Angela from Johnsonville and Other , 9 years old

The battle for Crystal Castle : the thirteenth adventure in the Kingdom of Fantasy / Stilton, Geronimo

Haliriously funny and brings back fantasy to all ages. In the book 📖 Geronimo was called to the kingdom of fantasy once more! The harmony stone had been stolen from crystal castle. without it the entire empire was weak. The invisible army was sure to lunch an attack.

Reviewed by Poppy from Wadestown and Wadestown School , 7 years old

The guardian of the realm : the eleventh adventure in the Kingdom of Fantasy, Geronimo Stilton ; translated by Julia Heim ; illustrations by Silvia Bigolin, Ivan Bigarella, Carla De Bernardi, Alessandro Muscillo, and Christian Aliprandi

Reviewed by Angela from Johnsonville and Amesbury School , 8 years old

Knife: an amazing, almost sentimental book. Many of us can relate to the helpless, lost faery as she discovers secrets about her realm, and experiences betrayal, loss, love and friendship.

A story like no other, R.J. Anderson creates beautiful pictures in your mind as you live the story with Knife. Soon, you’ll be pining to read more of this fabulous author’s work.

The Author of this book is Daisy Meadows. The main topic of this book is about Isabella the air fairy and how she cleans up the dirty air with her magic fairy wand. She gets the help from her Human friends Rachel / Kirsty. The issue that happened in the book was when one of Jack Frost’s (the bad guy in the story) green goblin came to the city and started spraying air freshener to make the air dirty again. He also stole Isabella’s fairy magic wand. I think that Daisy Meadows purpose of writing this story book is to Inform us to use Scooters, Bikes and go by walk but don’t always use Cars on roads for everything!

Reviewed by Ifra from Johnsonville and Amesbury School , 10 years old

Rosie’s secret friend is cool. It was kind of Rosie to tidy up Louisa’s bedroom. I like white rose cottage. The roses are not white, the house is white and the roses are all different colours of the rainbow. I recommend this book for children who like fairies.

Reviewed by Eleanor from Miramar and Seatoun School , 6 years old

I recently read one of Daisy Meadows new book, which was like the old books but a little bit more detail and much better ideas. In this book, nasty spoilt Jack Frost steals Fatima the face-painting fairy’s magical mirror keyring! Can Kirsty and Rachel save the day, or will Jack Frost get his way? Read this book to find out! Overall, this book was ok, if I had to read I would.