Reviewed by Isidora from Miramar and Seatoun School , 10 years old

I think that it is a awesome book with great pictures and words. My favourite part was when Nate did horrible singing and aurthor came along and did great singing and he became the lead singer.

Reviewed by Delia from Kilbirnie and Seatoun School , 8 years old

Big Nate from the top by Lincoln Peirce.

Big Nate is a good book if you like everyday lives of Midleschoolers and I would recommend this for ages eight and older because it sometimes does get very wordy.

Reviewed by Eva from Miramar and Seatoun School , 11 years old

Wellington City Libraries has some new comics and graphic novels in the children’s collection. Why not spring on down to your local library, during the last couple of weeks of August, and borrow them before they’re all gone!

“Love is in the air in Jersey City as Valentine’s Day arrives! Kamala may not be allowed to go to the school dance — but Ms. Marvel is! Which is bad news for… Loki? Then, when a mysterious stranger arrives in Jersey City, Ms. Marvel must deal with — a crush! Prepare for drama! Intrigue! Romance! Suspense! Punching things! Plus: see what happens when S.H.I.E.L.D. agent Jemma Simmons goes undercover at Kamala’s school! And Ms. Marvel shares her first amazing, spectacular team-up with Spider-Man! But when the Marvel Universe enters its last days, can Kamala summon the will to keep on fighting the good fight? Maybe with a pep talk from her idol, Captain Marvel!” — Back cover. 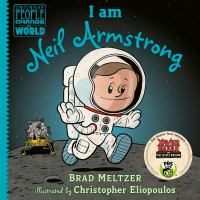 I am Neil Armstrong.

“A biography of Neil Armstrong, the first man to walk on the moon.”– Provided by publisher.

The latest adventures of the Teen Titans include Robin hoping that his dental routine saves him from making a dreaded trip to the dentist and Raven and Cyborg creating a pair of spooky-looking leggings from a pattern in one of Raven’s arcane books.

A collection of Peanuts comic strips featuring Snoopy and the rest of the Peanuts gang.

“Big Bad Ironclad! covers the history of the amazing ironclad steam warships used in the Civil War. From the ship’s inventor, who had a history of blowing things up and only 100 days to complete his project, to the mischievous William Cushing, who pranked his way through the whole war, this book is filled with surprisingly true facts and funny, brave characters that modern readers will easily relate to”–Publisher’s web site.

A misfit girl and her brother attend summer camp, where they struggle with primitive plumbing, snobby tentmates, and boys-versus-girls competitions.

The Smurfs 3 in 1: The Purple Smurfs, The Smurfs and the Magic Flute and the Smurf King.

Collects the first three Smurf graphic novels in one volume. 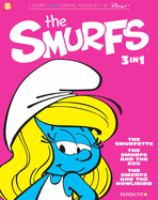 The beautiful and enigmatic (not to mention blue) Smurfette makes her debut in this collection of the original Smurfs comics by Peyo. Known in America primarily for the hit 80s animated TV series and the hit movies, many Smurfs fans don’t realize that the Smurfs originally appeared in comics. Now the Smurfs are back in SMURF-TASTIC comic adventures. Featuring the classic stories “The Smurfette”, “The Smurfs and the Egg”, and “The Smurfs and the Howlibird” and many more!

Nate endures a series of middle school hijinks and adventures while dealing with his crush on his baseball team’s new pitcher.

Magic Jack and the Goblin King.

“Like a bolt from the blue, Jack’s little sister Maddy is gone – carried into another realm by an ogre. When Jack and Lilly follow Maddy’s captor through the portal, they are ready for anything… except what they find waiting for them in the floating crossroads between worlds. Even the power of their magic plants may not be enough to get them back to earth alive. Alone and injured, Jack and Lilly must each face their own monsters – as well as giants who grind the bones of human children to feed their “beast” and a fearsome goblin king in the sewers down below. But when Jack finds himself in a tough spot, help comes from the most unlikely person: the goblin king!” –page [4] of cover.

Big Nate from the top, by Lincoln Peirce

Reviewed by gus from Wadestown and , 8 years old

Summer is here! So it’s time to take a pile of comics, find a big shady tree and spend some time letting the gentle breezes turn the pages for you. What would you take with you? Pages of Pokémon? Will you giggle at Garfeild and Titter at Tintin? Some more serious adventuring with Amulet?

There are other really cool titles with great illustrations, we have new titles coming in all the time so come in for a browse or have a look with ComicPlus online.

If you use a tablet or other

device you can download so you can read them when you’re you’re out of wifi range or stream them while you’re connected.

The animation, comic and app have captured the hearts and minds of many, so if you’re coming to the library for comics, reserve your copies to make sure you won’t be disappointed.

Did you know that Lord Evil has written an Adventure Time Encyclopaedia?!  Anything you want to know from about the land of Ooo (from the perspective of Lord Evil) can be found in it’s pages.  Luckily Finn, Jake and Marceline have put notes in the book when Lord Evil gets a bit over the top!

5. Asterix, by Goscinny and Udzero

10. My Little Pony, by Ted Anderson

Springing into action –  Pokemon the stand out favourites in the comic section.  Did you know that for the school last school holidays over 7000 comics were issued from Wellington Libraries!  You guys really love comics, huh? The first Monday of the holidays was a massive day for the comic collection when over 500 went out on the one day.

8. Asterix, by Goscinny and Udzero

10. The Smurfs Anthology, by Peyo

Big name favourites are at the top of the list this month!

The lovable fat cat Garfield has been around since 1978! Think you know your Garfield? Did you know that this food obsessed cat has his own TV award? That’s right in 1985 his show bagged an Emmy! Take a look and see!

Our other top cat comic is receiving the 3D treatment, with a spruced up anime version showing in Japan from early next month.

9. The Smurfs anthology, by Peyo