Hey kids! Welcome to the first month of spring!

Time to spring on down to your local library and check out the latest comics and graphic novels in the children’s collection.

Twins Stacy and Gina Cavallaro are on rival little league teams, and when Gina accidentally unleashes a curse that wakes the dead, Stacy’s misfit team gets coached by a baseball-playing zombie!

Truff is the ghost of a young boar, fueled by fury towards the hunter who shot her down. She has a lot to learn about her new afterlife, and thankfully the forest spirits Claude and Stanley are there to guide her! However, they soon find that her parents, along with their fellow animal villagers, have been kidnapped by the malicious mountain demon Mava! Truff wants to help, but… the hunter is finally within her grasp, and if she lets him go, she may never get her revenge! Is vengeance all that being a ghost is good for? Or is there something stronger keeping this little pig tethered to the living world?

The hit Scholastic chapter book series has been successfully adapted into the best-selling graphic novel series from Papercutz. As Geronimo continues to garner new fans from his animated adventures seen on Netflix and Amazon Prime, Papercutz proudly collects 3 Geronimo Stilton graphic novels in 1! Geronimo Stilton and friends travel back to the past in the Speedrat to save the future from dastardly Pirate Cats. First up, head back to visit the Dinosaurs, then save Mozart from composing a CAT-astrophe, and finally help Geronimo invent the printing press. Fun and educational, Geronimo Stilton has a huge fan following and thanks to the new animated series, that following is getting larger all the time!

Geronimo Stilton, top reporter for The Rodent’s Gazette, has a reputation of breaking the top news stories first to the citizens of New Mouse City. But lately, Sally Ratmousen of rival paper ‘The Daily Rat’, has been leaking Geronimo’s secret scoop! Can Geronimo keep the lid on a surprise celebrity guest to the city’s 100 year celebration or will Sally rat him out?

“When Neo Metal Sonic–an evil robot with Sonic’s speed, Dr. Eggman’s intellect, and an unbreakable mechanical body–conquers the island to grow his power even more, Sonic and his friends must team-up and take the fight to him. But even with the full power of the Resistance behind him, will Sonic be able to take down Neo Metal Sonic once and for all?”–Provided by publisher. 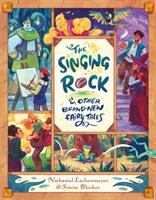 A genie just wants a chance to grant a wish to the frog who accidentally let him out of his lamp–meanwhile, the frog just wants to be left alone. A witch is tormented by the cheerful (and awful) singing of a persistent bard, but when she finally snaps and turns him into a rock, he just keeps on singing–somehow the power of terrible music overcomes all magic. A wizard wants a pet. An ogre just wants to make beautiful art. Four original, wry and utterly charming fairy tales comprise this new collection for young readers