The End of the Wild By Nicole Helget

“Eleven-year-old Fern helps to take care of her impoverished family by foraging for food in the forest, but when a fracking company rolls into town, she realizes that her peaceful woods and her family’s livelihood could be threatened”– Provided by publisher.

Do Not Open; Marty Pants #1 by Mark Parisi

When middle schooler Marty Pants discovers an alien plot to take over the world, no one, not his best friends Parker and Roongrat or his family or arch-enemy, Simon, believe him, so it is up to Mary to investigate and save the world.

Bring Me The Head of Ivy Pocket by Caleb Crisp 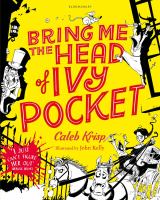 Our magnificently infuriating heroine is on the very brink of her greatest adventure: bound for London and Prospa House to save Anastasia Radcliff and young Rebecca Butterfield from fates worse than death. But there are difficulties at every turn. The devious Miss Always and her devilish Locks are in hot pursuit. Anastasia is gone, taken by her evil sister-in-law Estelle and hidden in a place no one will ever find her. And worst of all, the Clock Diamond is no longer working, blocking Ivy’s route to Prospa. There’s a mystery to be unpicked and if anyone can do it, it’s Ivy Pocket. After all, she has all the natural instincts of a Russian chess master. Ivy Pocket’s tumultuous finale is certain to involve breathtaking adventure, bone-shattering courage and frightful danger. But what price will she have to pay?. Ages 9+

The Wayward Witch and the Feelings Monster; Polly and Buster #1 by Sally Rippin

Who ever heard of a witch and a monster being friends? Everyone knows that witches don’t mix with monsters. Witches are educated, clever, sophisticated. But monsters? Monsters are just uncouth. Some are even dangerous. But Polly the witch and Buster the feelings monster have been best friends forever. It’s the sort of friendship that makes your heart squeeze with happiness. Somehow, they’ve managed to keep their friendship a secret. Until one day, when everything changes …

The Story of the Dancing Frog by Quentin Blake

“Gertrude is in despair until she encounters George the dancing frog. His fancy footwork and magical moves propel the unlikely duo into the showbiz spotlight. Soon Gertrude and George and hitting the big time, winning fans the world over.”–Back cover.