Clive Staples Lewis was born in Belfast, Ireland, on the 29 of November 1898 (that’s nearly 120 years 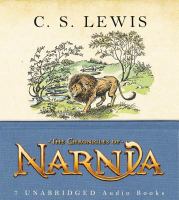 ago now). His mother died when Lewis was just 10 years old, and he received his education in boarding schools and with private tutors.

As a small child, Lewis played a lot with his older brother Warren, and the two boys created an imaginary land called ‘Boxen’, which they continued for many years. Perhaps these early experiences were the inspiration for Narnia?

C. S. Lewis married once to an American writer named Joy Davidman. Joy sadly passed away from cancer only four years later. Lewis died in 1963 after suffering a heart attack, exactly one week before his 65th birthday.

Lewis was most famous for writing poetry and novels, but also worked as a university teacher. He was very spiritual as an adult, and wrote a lot about Christianity. C. S. Lewis published a total of 74 books in his lifetime for both children and adults, his most famous series being

Since his death, C. S. Lewis’s stories have continued to be very popular and are considered to be classics in British literature. Some have even been made into movies! If you would like to read or listen to a book by C. S. Lewis, head over to the catalogue to check whether any are available in your local library, or place a free reserve.