The school holidays are almost done. And while we have some pretty nice days so far, doesn’t mean good old Jack Frost isn’t going to pay Wellington a visit. So if are looking for some more DVDs to watch over the blistery cold periods, why not have a read of my latest reviews of Walt Disney’s  movies: Meet the Robinsons and Maleficent, (which aired on TV 2 last weekend),and see if they appeal to you. But you better get your hands on these DVDs quick … before someone else does! I promise you these movies deliver on what Disney does best: Excitement, adventure, action and… a happy ending! 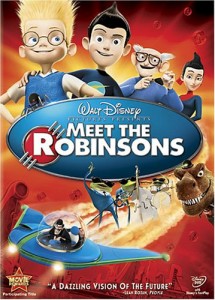 If you have seen and liked The Incredibles, then this is another Disney movie you must see.

Described as the ‘Back to the Future’ for kids, Meet the Robinsons takes you on a journey that the whole family can enjoy. Lewis is an orphan and brilliant inventor who meets mysterious stranger named Wilbur Robinson, whisking Lewis away in a time machine and together they team up to track down Bowler Hat Guy, who wants to destroy Lewis in a showdown that ends with an unexpected twist of fate that has a huge impact on Lewis’, Wilbur’s and even the Bowler Hat Guy’s future.

I found the film very funny and exciting. The Robinsons are an eccentric family headed by the mysterious patriarch and tech mogul genius, Cornelius Robinson, who Wilbur jokes looks like Tom Selleck. Everyone is strange and unique in their own way, from Frannie – Wilbur’s ‘no-nonsense’ Mum, who conducts frog band, Grandpa who wears his clothes backward, twins Dimitri and Spike who stay in flower pots and Carl a talking robot like C-3PO.  But what touched me most about this film the “keep moving forward” motto throughout the film. 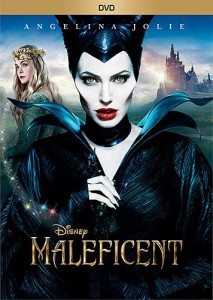 This is Sleeping Beauty as you have never seen it before.

The story of Walt Disney’s “Sleeping Beauty” is different from its predecessor. But more importantly this story focuses on the evil fairy/villain in the original story, Maleficent. In this version, Maleficent, (Angelina Jolie), who was originally a good fairy and protector of the fairy lands called the Moors, becomes a vengeful, bad fairy, (or ‘turns to the dark side’ in tradition Darth Vader style), after she is betrayed by King Stefan.

To pay him back, she curses his daughter, the infant princess Aurora to a ‘sleep like death’ which she can only awaken from by ‘true love’s kiss’. However things become complicated when Maleficent realizes  that Aurora holds the key to peace in the kingdom – and perhaps to Maleficent’s true happiness as well. To add more complication to the mix, Maleficent, acting as a surrogate mother, becomes fond of Aurora!

Throughout the film, Maleficent experiences conflict, similar to iconic Star Wars villain, Darth Vader, whether being trapped in the dark side is permanent or whether there is still good in her… and she will save the day.

Overall  I found the film very entertaining and without question, does it’s predecessor justice.  Lots of things you can expect from a Disney movie: Excitement, adventure, action and… a happy ending!

Extra: While you’re at it, why not grab Sleeping Beauty to watch alongside this movie: