Thanks to the cool people at Random House Books we have a wicked back to school prize pack for you to win. The pack includes 3 books from James Patterson’s Middle School series , a book bag, and a notepad and pencil. 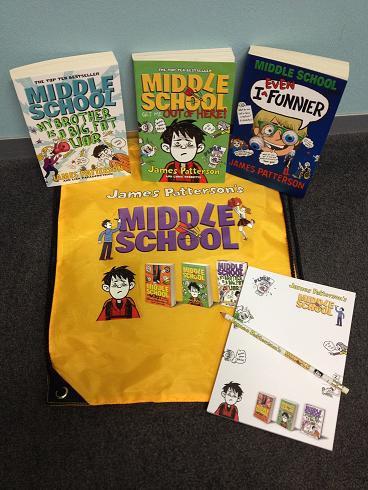 How do you win…? It’s easy! All you have to do is comment on this post and tell us the best and worst thing about going back to school after the school holidays (make sure your comments are nice and you’re not being mean about anyone). Feel free to get creative; some of the best stories are the made-up ones. A team of expert librarians will pick a winner.

The Middle School series are really funny! Here’s what they’re about:

Middle schooler Jamie Grimm has big dreams of being the best stand-up comic in the world—and he won’t let the fact that he’s wheelchair-bound stand in his way. After winning the New York state finals in the Planet’s Funniest Kid Comic Contest, Jamie’s off to Boston to compete in the national semi-finals.

Middle School: My Brother Is a Big, Fat Liar

Georgia Khatchadorian plans to excel at Hills Village Middle School in all the places her troublemaking brother failed. She’s even bet him that she’ll quickly become one of the most popular girls in school. But Rafe left a big mark at HVMS, and no one will give Georgia a chance!

Middle School: Get Me Out of Here!

After sixth grade, the very worst year of his life, Rafe Khatchadorian thinks he has it made in seventh grade. He’s been accepted to art school in the big city and imagines a math-and-history-free fun zone. Wrong! It’s more competitive than Rafe ever expected, and to score big in class, he needs to find a way to turn his boring life into the inspiration for a work of art. His method? Operation: Get a Life!