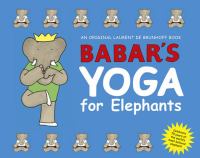 A few years ago archaeologists working in a cave several days from Celesteville discovered some paintings of elephants in yoga positions. And what surprised them even more was to find many little clay cylinders with drawings on them. They dated from the earliest times of elephants on the planet, and they also depicted elephants in yoga positions. When the seals were studied in the labs in Celesteville, the scientists could hardly believe their eyes! Not only were elephants capable of performing yoga, it seemed they had invented it.

Check out Babar’s Yoga for Elephants written by Babar himself.  It has easy to follow instructions and step by step illustrations of yoga positions and stretches.

It also has advice on what to do with your trunk while in position, a dilemma that human yoga books often ignore.