In Ancient Greek mythology there is a sea dragon called ketea (singular ketos).

They are amphibious and have two flippers instead of legs. They have sleek bodies with hides covered in barnacles, and a long, tapering tail with a sea-weed like end.

Ketea have a long, pointy snout, long ears, sharp horns on their heads, and small sharp teeth. Although they live in the ocean around Greece, they can also survive on land.

Ketea obey Poseidon, Greek god of the sea, and he sends them to punish people who have offended him. They are ravenous and can never get enough to eat! 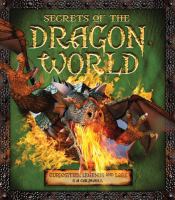 The Dreadful Dragon by Kaye Umansky

How to Seize a Dragon’s Jewel by Cressida Cowell

Secrets of the Dragon World by S. A. Caldwell