What do cats do when we aren’t around?  Where do they prowl on those long summer days and moonlit nights? Some cats recline on the mat in that patch of sun, some sit by the food bowl patiently waiting for bis-cats, some shred your new curtains and some survey the world from the garden wall. Other cats though, according to Erin Hunter anyway, prowl in clans hunting, fighting and defending their territory against all odds.

Erin Hunter is actually a group of three writers who write the Warriors series using the pseudonym Erin Hunter. I have just read the first book of the Warriors series called Into the Wild. This book follows the story of Rusty – a pet cat or “kitty-pet”, and his transition into a member of the Thunder Clan. Lots of kids really like these books, Mehrbano from Tawa has even written reviews on this blog. I think the clan crests are cool and there are interesting descriptions of human life seen through wildcat eyes. The books in the first Warriors series are: 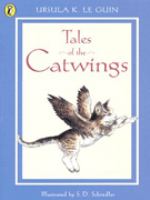 Another fantasy book about cats is Catwings by Ursula K. Le Guin. If I could purr I would purr each time I think about this book. It is a short tale about four sibling cats that are mysteriously born with wings. The story is beautifully illustrated by S. D. Schindler and as you read you can imagine yourself flying along side Harriet, James, Roger and Thelma as they try to find a safe home away from the dangers of the city. If you like cats and you have kind hands I strongly recommend you read Catwings.