The fix : overcome the invisible barriers that are holding women back at work / King, Michelle P.
“A guide to overcoming the invisible barriers that hold women back at work. While the focus is on women in this book, King is not blind to others facing barriers too — men themselves who deviate from the Don Draper model, for example, and others who are perceived as not fitting in. Fixing the workplace to help women will lead to fixing the workplace for all because, King concludes, ‘it is the only way companies will survive the inevitable changes to come’.” Based on King’s research and exclusive interviews with major companies and thought leaders, The Fix reveals why denying the fact that women are held back just because they are women – what she calls gender denial – is the biggest obstacle holding women back at work and outlines the hidden sexism and invisible barriers women encounter at work every day. In this fascinating and empowering book, King outlines the invisible barriers that hold women back at all stages of their careers, and provides readers with a clear set of takeaways to thrive despite the sexist workplace, as they fight for change from within. Gender equality is not about women, and it is not about men – it is about making workplaces work for everyone. Together, we can fix work, not women.” (Catalogue)

The Leader’s Guide to Unconscious Bias: How to reframe bias, cultivate connection, and create high-performing teams / Fuller, Pamela A timely, must-have guide to understanding and overcoming bias in the workplace, from the experts at FranklinCovey. Unconscious bias affects everyone. It can look like the disappointment of an HR professional when a candidate for a new position asks about maternity leave. It can look like preferring the application of a red brick university graduate over one from a state school. It can look like assuming a man is more entitled to speak in a meeting than his female junior colleague. Teaching you how to overcome unconscious bias, this book provides more than thirty unique tools, such as a prep worksheet and a list of ways to reframe your unconscious thoughts. According to the experts at Franklin Covey, your workplace can achieve its highest performance rate once you start to overcome your biases and allow your employees to be whole people. By recognising bias, emphasising empathy and curiosity, and making true understanding a priority in the workplace, we can unlock the potential of every person we encounter.” (Catalogue)

Unapologetically ambitious : take risks, break barriers, and create success on your own terms / Archambeau, Shellye
” Shellye Archambeau recounts how she overcame the challenges she faced as a young black woman, wife, and mother, managing her personal and professional responsibilities while climbing the ranks at IBM and subsequently in her roles as CEO. Through the busts and booms of Silicon Valley in the early 2000s, this bold and inspiring book details the risks she took and the strategies she engaged to steer her family, her career, and her company MetricStream toward success. Through her journey, Shellye discovered that ambition alone is not enough to achieve success. Here, she shares the practical strategies, tools, and approaches readers can employ right now, including concrete steps to most effectively. Unapologetically Ambitious invites readers to move beyond the solely supportive roles others expect them to fill, to learn how to carefully tread the thin line between assertive and aggressive, and to give themselves permission to strive for the top.” (Catalogue)

Out-innovate : how global entrepreneurs from Delhi to Detroit are rewriting the rules of Silicon Valley / Lazarow, Alexandre
“The new playbook for innovation and startup success is emerging from beyond Silicon Valley, at the ‘frontier.’ Startups have changed the world. In the United States, many startups, such as Tesla, Apple, and Amazon, have become household names. For decades, the hot center of this phenomenon has been Silicon Valley. This is changing fast. Thanks to technology, startups can now take root anywhere–and they are, from Delhi to Detroit to Nairobi to Sao Paulo. As venture capitalist Alexandre Lazarow shows in this insightful and instructive book, this Silicon Valley “gospel” is due for a refresh–and it comes from what he calls the “frontier,” the growing constellation of startup ecosystems, outside of the Valley and other major economic centers, that now stretches across the globe. With rich and wide-ranging stories of frontier innovators from around the world, Out-Innovate is the new playbook for innovation–wherever it has the potential to happen.” (Catalogue)

Data-driven business transformation : how to disrupt, innovate, and stay ahead of the competition / Carruthers, Caroline
” Data Driven Business Transformation illustrates how to find the secrets to fast adaptation and disruptive origination hidden in your data and how to use them to capture market share. Digitalisation – or the Digital Revolution – was the first step in an evolving process of analysis and improvement in the operations and administration of commerce. The popular author team of Caroline Carruthers and Peter Jackson, two global leaders in data transformation and education, pick up the conversation here at the next evolutionary step where data from these digital systems generates value, and really use data science to produce tangible results.” (Catalogue) 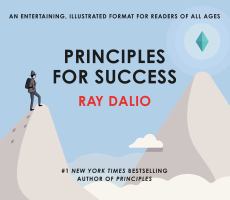 Principles for success / Dalio, Ray
“An entertaining, illustrated adaptation of Ray Dalio’s Principles, the #1 New York Times bestseller that has sold more than two million copies worldwide.
Principles for Success distills Ray Dalio’s 600-page bestseller, Principles: Life & Work, down to an easy-to-read and entertaining format that’s acces­sible to readers of all ages. It contains the key elements of the unconven­tional principles that helped Dalio become one of the world’s most suc­cessful people–and that have now been read and shared by millions worldwide–including how to set goals, learn from mistakes, and collaborate with others to produce exceptional results. Whether you’re already a fan of the ideas in Princi­ples or are discovering them for the first time, this illustrated guide will help you achieve success in having the life that you want to have.” (Catalogue)

Lead any team to win : master the essential mindset to motivate, set priorities, and build your own dynasty / Selk, Jason
““One of the ten best leadership books so far this year.” — Bloomberg …Selk and Bartow show how it takes collective mental toughness to win, developed only through a clear understanding of the goals, limitations, roles and personalities on your team. Great leaders respect and embrace channel capacity, Selk and Bartow explain, which means they don’t overload their teams with blizzards of tasks and responsibilities. They bust the “focus” and “relationship” fallacies, as those words are meaningless for teams unless they are byproducts of activities that really matter. And Selk and Bartow teach how to manage expectations, since doing so creates a level of respect between the leader and the team — and among the team members–that is a catalyst for peak achievement.” (Catalogue)

The future leader : 9 skills and mindsets to succeed in the next decade / Morgan, Jacob
“Do you have the right mindsets and skills to be able to lead effectively in the next ten years and beyond? There has been a lot written about leadership for the present day, but the world is changing quickly. What worked in the past won’t work in the future. We need to know how to prepare leaders who can successfully navigate and guide us through the next decade and beyond. How is leadership changing, and why? How ready are leaders today for these changes? What should leaders do now? To answer these questions, Jacob interviewed over 140 CEOs from companies like Unilever, Mastercard, Best Buy, Oracle, Verizon, Kaiser, KPMG, Intercontinental Hotels Group, Yum Brands, Saint-Gobain, Dominos, Philip Morris International, and over a hundred others. What emerged from all of this research is the most accurate groundbreaking book on the future of leadership, which shares exclusive insights from the world’s top CEOs and never before seen research. (Catalogue)

How to listen and how to be heard : inclusive conversations at work / Carpenter, Alissa
“For anyone who has ever felt their voice isn’t heard at work. This is a guide on how to empower yourself and others to communicate with people who think, act, and experience things differently than you do, and do so with more confidence, candor, and authenticity. This book is about learning how to communicate with, through, and alongside what makes us different. It’s about open dialogue and practical tools that get everyone on the same page–or at least in the same room. It’s not about quick fixes or the absence of conflict; it’s about working toward authentic communication in the workplace–for managers, employees, and colleagues from all fields. It’s about remembering that we’re all here to work together.” (Catalogue)

Crisis communication strategies : how to prepare in advance, respond effectively and recover in full / Coleman, Amanda
“Learn effective strategies to protect your brand through preparation, control and long-term recovery from any kind of crisis – internal, external, political or natural disaster. Crisis communication is high stakes work. For communications managers and PR professionals, it’s likely to be the most stressful time of their working life. Crisis Communication Strategies is a must-have handbook which covers the whole span of the crisis from preparing and laying the groundwork before it occurs, during the incident, and the aftermath, including the move to recovery. It guides readers through each phase, providing details of what to consider, what should be done, and tips and checklists for improved responses. Crisis Communication Strategies is the essential guide for PR and communication professionals to protecting your company and building true, long-term resilience.” (Catalogue)

Charismatic leadership : the skills you can learn to motivate high performance in others / Murray, Kevin
“Develop the key skills that will make you a charismatic leader and more easily win over customers, peers and colleagues and create a culture where everyone succeeds. Charismatic Leadership will show you how to be a powerful influencer with your peers, your colleagues and your customers. You’ll learn why charisma is a vital asset in any organization, understand its essential components, find out how to grow your charismatic presence and discover why you need the companion skills of coaching, problem-solving and empathy. Using charisma effectively helps everyone perform at a high level. This book will show you how.” (Catalogue)

Working remotely : secrets to success for employees on distributed teams / Douglas, Teresa
“Teresa Douglas has worked remotely since 2010 in a variety of management-level roles. She holds an MFA in Fiction from Sarah Lawrence College and an MBA from the University of North Carolina, Chapel Hill. She resides in Vancouver, British Columbia. Book jacket.” (Catalogue)