This is the first zine we have received in weeks. Weeks!! But not to worry, because Wellington Zinefest is happening this weekend and we always buy heaps… Stay tuned! Follow the shiny shelves and wiggling wheels of this mobile art print space as it winds its way secretly around some of the capital’s most magical art locations. Stacked to the brim with a curated collection of delightful zines, artist books and exhibition catalogues you’ll need to ‘like’ Zinefest on Facebook and follow on Twitter to find out where to catch a glimpse of this trundling treasure! Venue: Disclosed via facebook.com/wellingtonzinefest but pssst – we’ll be hosting the print space at Central library from today until Monday 17th November! After that, you will need to follow Zinefest updates (or click “going” on the Mobile Art Space Facebook event) to find out where else it will be going in the leadup to this year’s event, which is approaching fast!

Wellington Zinefest 2014 will be held on Saturday 22 November at James Cabaret, 5 Hania Street in Mount Victoria. We can’t wait!

If you know or have any kids that would like to try out making a zine, then looky here… 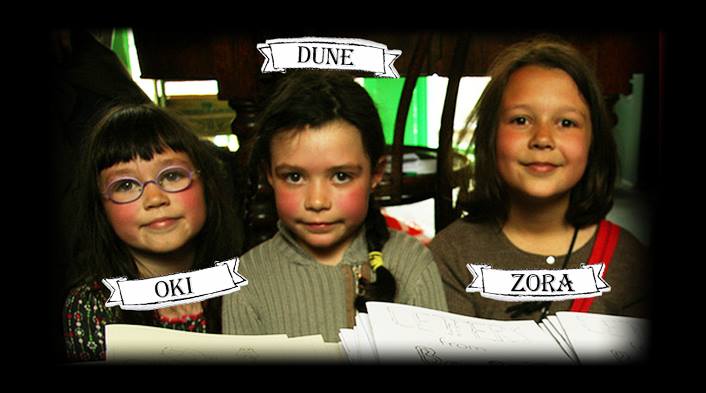 Come along to the free children’s zine workshop and have a go at making your very own zine!

Thirteen-year-old Zora Patrick has been making zines for almost five years. In 2011 she won Wellington Zinefest’s ‘Best of the Fest’ trophy, and in 2012 was invited to the 2012 KOMACON (children’s comic competition) in Bucheon, Korea.

Zora and her zine-making younger sisters Oki (9) and Dune (8), whose work was also recently included in the exhibition Small Press at RAMP Gallery in Hamilton, will be talking about ideas for zines, zine-making techniques, and presenting some of their favourite creations.