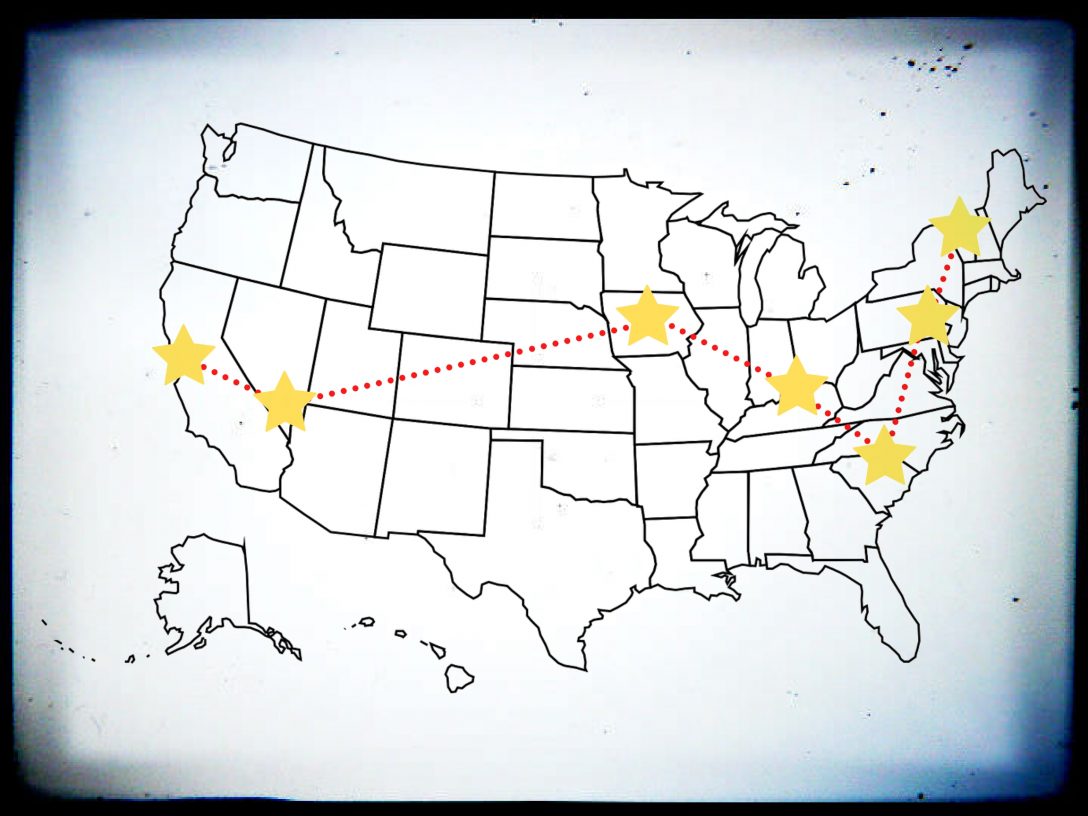 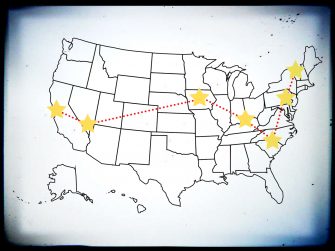 There’s nothing like a road trip to bring out the strangeness in a country: the oversized fruit; the abandoned houses; the mysterious side-roads that go who-knows-where. But if you choose carefully–or have help from your local librarian–then the same feeling can be created with books: the sense of being in between, or out of time, or unhooked from the everyday world.

That’s where this blog comes in! Join us as we travel across America, stopping at seven weird, wonderful, scary and strange sites, from New England to California and a few places in between. Along the way we’ll recommend a selection of titles that create a similarly peculiar feeling. Read on to begin!

What: Politically radical puppets and sourdough bread
Where: Just outside Grover

Born in the midst of the anti-Vietnam War protests, the puppets of the Bread and Puppet Theater have loomed over crowds since the 1960s. Their giant faces and stilted legs have become one of the key symbols of American counterculture–but where do they go when they retire? To this barn, of course!

The Mannequin Makers by Craig Cliff — What kind of life would you lead if you’d been trained to be a living mannequin?

Slouching Towards Bethlehem by Joan Didion — Suffering from writers block, Joan Didion sets off to the heart of America’s counterculture.

What: A small town perched upon an everlasting fire
Where: North-west of Philadelphia

There are several theories about how a fire began in the tunnels beneath the coal mining town of Centralia, but when a 12-year-old boy almost fell into a fiery sinkhole in his backyard, one thing became certain: the town would have to be abandoned. Today Centralia has fewer than 5 residents, and is the inspiration behind the Silent Hill series.

Annihilation by Jeff Vandermeer — Area X has been sealed up for over three decades, and has a strange influence on anyone who enters.

Winesburg, Ohio by Sherwood Anderson — The book that broke the romantic notion of life in small town America (and the traditional structure of the novel).

The Denniston Rose by Jenny Pattrick — 2000 feet above sea level lies Denniston, a tough, West Coast coal mining town for those with something to escape.

Have you ever wondered what goes into making a roller coaster? In the case of the Fury 325, the designers took inspiration from the hornet–not just the insect, but also Charlotte’s reputation as a “hornet’s nest of rebellion” during the American Revolution. (For the record, the Fury 325 is the fifth tallest roller coaster in the world, with a top speed of 153 km/h!)

The Calculating Stars by Mary Robinette Kowal — There are just 50 years before Earth becomes uninhabitable, but for pilot Elma York, the first challenge will be convincing people that women should be allowed to fly.

The Right Stuff by Tom Wolfe — Did you know that when NASA was preparing the first manned space flight, they wanted to use trapeze artists? (But settled on test pilots instead.)

Sisters of the Vast Black by Lina Rather — A convent of nuns (and a living space ship) tackle the theological and physical dangers of a post-war solar system.

What: A museum where dinosaurs and humans co-exist
Where: Petersburg, Kentucky

It’s not often that a museum opens to protests, but that’s exactly what happened at the Creation Museum in 2007. With a focus on young Earth creationism, the Creation Museum has displays showing the co-existence of humans and dinosaurs, and drew 800,000 people in 2017. (By comparison, in 2015/16 Te Papa had 1.7 million visitors.)

Gilead by Marilynne Robinson — A dying reverend writes a letter to his six-year-old son about the strange wonders of the world and his place in it.

American Gods by Neil Gaiman — The book (and TV series) that asks the question, “What happens to gods when people stop believing in them?”

Go Tell it on the Mountain by James Baldwin — Baldwin weaves together race, religion, sexuality and family in this seminal–and semi-autobiographical–work.

What: One of America’s largest state fairs (and home of the Butter Cow)
Where: Iowa State Fairgrounds, Des Moines

With its carnival rides, butter sculpting and delicious deep fried foods (cookie dough in a waffle on a stick, anyone?), the Iowa State Fair is a Midwest institution. And every four years it’s also the place you get to see presidential hopefuls vie for votes while trying to eat deep fried oreos–never easy.

Nights at the Circus by Angela Carter — The life and times of Sophie Fevvers, a winged woman who tours with a circus to the far reaches of Siberia.

Something Wicked This Way Comes by Ray Bradbury — Did you know that Ray Bradbury’s inspiration for writing was a magician named Mr. Electrico who told him to “Live forever!”?

The Night Circus by Erin Morgenstern — When magicians fight, giant dreamlike circuses are the result. ‘Twas ever thus.

What: Where Las Vegas’ neon signs go to die (and be resurrected)
Where: Las Vegas Boulevard

When you think about visiting Las Vegas, stopping at a museum isn’t usually the first thing that comes to mind. But the Neon Museum–or Neon Boneyard, as it’s often called–isn’t an ordinary museum! Scattered across the campus are signs from some of Vegas’ most well-known historic casinos and motels, including the Sahara, the La Concha and more.

The Power by Naomi Alderman — When women gain the power to emit electrical currents through their fingers, the world is changed forever.

If you were designing a house for ghosts, and you had an unlimited budget, you’d probably end up constructing something like the Winchester Mystery House. Built between 1884 and 1922, the house was designed to appease (or escape) the ghosts of all those who had been killed by Winchester rifles. Pop in and have a look around…

Broken Monsters by Lauren Beukes — A body is found in a Detroit tunnel. The top half is human, but the legs are those of a deer.