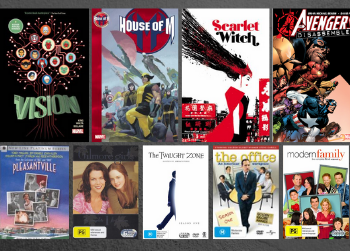 After a lengthy hiatus, the Marvel Universe of films have restarted on Disney Plus with the unexpected meta-fictional world of WandaVision. Continuing on from the endgames of the last Avengers film, WandaVision eschews the usual Marvel film template with interlocking levels of mystery and deeply conflicted characters all wrapped up within a darkly satirical sitcom parody running across the decades.

Below are a selection of comics, films, TV series and books that directly influenced WandaVision’s complex world of mischievous invention, enigma and heartbreak. From comics that helped drive plot in the TV series to TV sitcoms that influence each episode’s comedy, look and feel, to the Marvel films themselves, consider this a sideways look into the many genius aspects of WandaVision

Vision : the complete collection / King, Tom
“He was created to kill the Avengers but he turned against his “father.” He found a home among Earth’s Mightiest Heroes, and love in the arms of the Scarlet Witch. It didn’t end well. Now, the Vision just wants an ordinary life with a wife and two children, a home in the suburbs, perhaps even a dog. But it won’t end any better. Tom King and Gabriel Hernandez Walta confound expectations in their heart-breaking, gut-wrenching, breath-taking magnum opus collected in all its Eisner Award-winning glory.” (Catalogue)

House of M / Bendis, Brian Michael
“The Marvel event of the decade is here! The Avengers and the X-Men are faced with a common foe that becomes their greatest threat: Wanda Maximoff! The Scarlet Witch is out of control, and the fate of the entire world is in her hands. Will Magneto help his daughter or use her powers to his own benefit? Starring the Astonishing X-Men and the New Avengers! You know how sometimes you hear the phrase: ‘and nothing will ever be the same again?’ Well, this time believe it, buster! Nothing will ever be the same again! Collects House of M #1-8, and Pulse House of M Special Edition Newspaper.” (Catalogue)

Scarlet Witch [1] : witches’ road / Robinson, James Dale
“Wanda Maximoff ‘s magical mystery tour continues on the streets of Paris; she will find the broken-hearted hero Le Peregrine. Can Wanda mend his broken wings and help him soar again? She’ll risk life and limb to try; next stop, Hong Kong, where an ancient warlock named the Dark Tongi has taken a powerful hold. Wanda must seek the help of a young witch, known as the Wu – but she has her own battle to fight. The former Avenger’s personal journey gets reflective as she explores her early memories and attempts to reconcile the sins of her past, but it’s time for a family reunion with her twin brother Pietro…but what happens when the Scarlet Witch and Quicksilver are on opposing sides? ” (Catalogue) 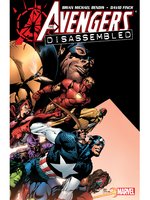 Avengers: Disassembled, Brian Michael Bendis (ebook)
Collects Avengers (1998) #500-503. It begins with the return of a team member thought dead and by the time it’s over, everything you know about the Avengers will have changed! It’s the worst day in team history, as Earth’s Mightiest Heroes try to deal with the shocking tragedy around them. Who is behind this, and why? Will it tear the team apart? Who will fall at the hands of the Avengers’ greatest enemy? Guest-starring every Avenger…ever! (Overdrive description)

“Two 1990’s teenagers find themselves in a 1950’s sitcom where their influence begins to profoundly change that complacent world.” (Catalogue)

The twilight zone : the original series. Season one.

“There is a fifth dimension beyond that which is known to man. It is a dimension as vast as space and as timeless as infinity. It is the middle ground between light and shadow, between science and superstition, and it lies between the pit of man’s fears and the summit of his knowledge. This is the dimension of imagination. It is an area we call… The Twilight Zone.” (Catalogue)

Gilmore girls. The complete first season
“Lorelai and Rory are a mother and daughter who are sharing life’s ups and downs in a small town in Connecticut. This heartfelt, humorous drama appeals to young and old alike with it’s blend of traditional family issues and hip attitude.” (Catalogue)

“Modern Family takes a refreshing and funny view of what it means to raise a family in this hectic day and age. Multicultural relationships, adoption, and same-sex marriage are just a few of the timely issues faced by the show’s three wildly diverse broods. No matter the size or shape, family always comes first in this hilariously ‘modern’ look at life, love, and laughter.” (Catalogue)

The office [US]. Season one

“The grave course of events set in motion by Thanos that wiped out half the universe and fractured their ranks compels the remaining to take one final stand in the grand conclusion to twenty-two films.” (Catalogue)

“After another incident involving the Avengers results in collateral damage, political pressure mounts to install a system of accountability, headed by a governing body to oversee and direct the team. The new status quo fractures the Avengers, resulting in two camps, one led by Steve Rogers and his desire for the Avengers to remain free to defend humanity without government interference, and the other following Tony Stark₂s surprising decision to support government oversight and accountability.” (Catalogue)