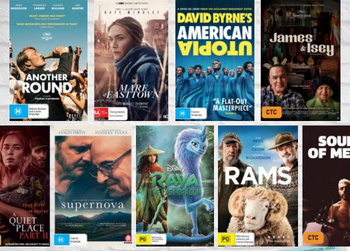 Here we have the very best DVDs of 2021, as selected by our own WCL librarians. All of these titles are available to loan!

Mare of Easttown
What more can you say about this great show that hasn’t already been said? A fantastically nuanced TV role from Kate Winslet, that embedded itself into the cultural zeitgeist of 2021. In a suburb of Philadelphia, Winslet plays Mare Sheehan, a former local basketball hero whose last minute shot won a State Championship, and who is now – 25 years later – a beleaguered police detective investigating the recent murder of a teenage mother, while also trying to balance the demands of her multi-generational family, the failure to solve an ongoing cold case of a missing girl, and a personal life that is fraying at the edges. The mechanics of the mystery itself are fairly conventional, with its ‘Dead girl-small town suspicions’ plot, but by focusing the story around the complicated family life & personal struggles of Winslet’s main character, it add layers not often found in other shows of the same ilk. Or sometimes found, but only in the lives of the male lead characters.

Synchronic
Every year throws up some interesting low-budget indie sci-fi, and from 2021 we had ‘Synchronic’ from Aaron Moorhead and Justin Benson (Spring, The Endless). Anthony Mackie & Jamie Dornan are Steve & Dennis, paramedics in New Orleans, who begin to get call outs to a series of strange incidents where people are either dead in bizarre circumstances, or have wild, incoherent, stories to explain their injuries. All the cases are linked to a new designer drug called Synchronic, and the incidents become personal when Dennis’ daughter is identified as missing from one of the scenes where someone died from taking the drug. Steve attempts to track down the source of the drug, leading to an encounter with the drugs creator – who tells him Synchronic has some unique side effects…To say any more would spoil the plot of this intriguing, low-key sci-fi. Another example in a line of films with minimal characters, effects, or locations (Time Lapse, Coherence, Primer etc). that chooses to focus on ideas rather than explosions.

Nobody
Every year also throws up some ridiculous, yet hugely entertaining, action flick, and last year’s was ‘Nobody’. Directed by Russian director Ilya Naishuller (Hardcore Henry) and written by Derek Kolstad (creator of the John Wick franchise) sees Bob Odenkirk (Breaking Bad, Better Call Saul) play Hutch Mansell, a seemingly average middle aged office worker. However, much like John Wick, Hutch is not the mild-mannered guy he is pretending to be, and when his frustrations with his hum-drum life and a recent home-robbery boil over, he ‘helps out’ a young woman on a bus being harassed by a gang of thugs. This, however, only causes him to become the target of a vengeful Russian drug lord, and what follows is a hugely entertaining action-fest full of bonkers violence, absurdly entertaining scenes, and a good deal of tongue in cheek self-awareness. This works in the same way the first Taken worked, as Odenkirk seems the last actor to be believable as a ruthless killing machine, just as Liam Neeson initially was. Tons of fun. (Mark)