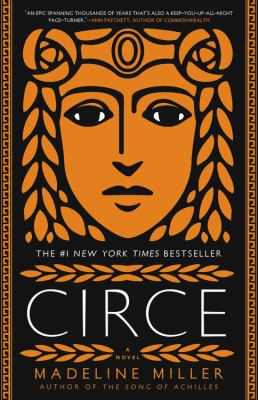 Amongst our recent fiction titles are a range of books inspired by myths and legends from Greece, Indonesia, Ireland, and Scandinavia. Myths and legends magnetically draw authors; these ideas reemerge in writing as the tales that form culture, ideas of who we are, and define social boundaries which prove to be an excellent landscape for characters. This selection has a great range of styles and settings, encompassing action, family drama and psychological fiction, set in the modern day and ancient times.

Everything under / Daisy Johnson.
“Words are important to Gretel, always have been. As a child, she lived on a canal boat with her mother, and together they invented a language that was just their own. She hasn’t seen her mother since the age of sixteen, though almost a lifetime ago and those memories have faded. Now she works as a lexicographer, updating dictionary entries, which suits her solitary nature. A phone call from the hospital interrupts Gretel’s isolation and throws up questions from long ago.” (Catalogue)

The mere wife / Maria Dahvana Headley.
“Herot Hall is a fortress guarded by an intense network of gates, surveillance cameras, and motion-activated lights. Dylan and Gren live on opposite sides of the perimeter, neither boy aware of the barriers erected to keep them apart. Gren lives with his mother, Dana, just outside the limits of Herot Hall. A former soldier, Dana didn’t want Gren, didn’t plan Gren, and doesn’t know how she got Gren. But now that she has him, she’s determined to protect him from a world that sees him only as a monster. When Gren crosses the border into Herot Hall and runs off with Dylan, he sets up a collision between Dana’s and Willa’s worlds that echoes the Beowulf story – and gives sharp, startling currency to the ancient epic poem.” (Syndetics summary)

Apple and knife / Intan Paramaditha ; translated by Stephen J Epstein.
“Intan Paramaditha’s long-awaited English debut, announcing herself to the West as a startling and provocative new voice. Inspired by horror fiction, myths and fairy tales, Apple and Knife is an unsettling ride that swerves to the supernatural, exploring the danger and power of occupying a female body. These short fictions, set in the Indonesian everyday–in corporate boardrooms, in shanty towns, on dangdut stages–reveal a soupy otherworld stewing just beneath the surface. This is subversive feminist horror at its best, where men and women alike are arbiters of fear, and where revenge is sometimes sweetest when delivered from the grave.” (Syndetics summary)

Olympus bound / Jordanna Max Brodsky.
“Manhattan has many secrets. Some are older than the city itself.
Summer in New York: a golden hour on the city streets, but a dark time for Selene. She’s lost her home and the man she loves. A cult hungry for ancient power has kidnapped her father and targeted her friends. To save them, Selene must face the past she’s been running from – a past that stretches back millennia, to when the faithful called her Huntress. Moon Goddess. Artemis. With the pantheon at her side, Selene must journey back to the seat of her immortal power: from the streets of Rome and the temples of Athens — to the heights of Mount Olympus itself.” (Syndetics summary)

Circe : a novel / Madeline Miller.
“Circe is not powerful like her father Helios, nor viciously alluring like her mother Perse. Turning to the world of mortals for companionship, she discovers that she does possess power– the power of witchcraft, which can transform rivals into monsters and menace the gods themselves. Zeus banishes her to a deserted island, where she hones her occult craft, tames wild beasts and crosses paths with many figures in mythology. When Circe unwittingly draws the wrath of both men and gods, she ultimately finding herself pitted against one of the most terrifying and vengeful of the Olympians.”

For the immortal / Emily Hauser.
“Thousands of years ago, in an ancient world where the gods control all and heroes fight to have their names remembered down the ages, two extraordinary women become entangled in one of the greatest heroic tales of all time . . . and must face how much they are willing to risk for immortality. Desperate to save her dying brother, Admete persuades her father, the king of Tiryns, to let her join Hercules on one of his legendary twelve labours. Travelling to the renowned female warrior Amazons in search of a cure, Admete soon discovers that both Hercules and the fearsome Amazons are not as they first seemed.” (Syndetics summary)

The testament of Loki / Joanne M. Harris.
“Ragnarok was the End of Worlds. Asgard fell, centuries ago, and the old gods have been defeated. Some are dead, while others have been consigned to eternal torment in the netherworld – among them, the legendary trickster, Loki. A god who betrayed every side and still lost everything, who has lain forgotten as time passed and the world of humans moved on to new beliefs, new idol and new deities . . . But now mankind dreams of the Norse Gods once again, the river Dream is but a stone’s throw from their dark prison, and Loki is the first to escape into a new reality.” (Syndetics summary)

Awayland : stories / Ramona Ausubel.
“An inventive story collection that spans the globe as it explores love, childhood, and parenthood with an electric mix of humor and emotion. And though some of the stories are steeped in mythology, they remain grounded in universal experiences: loss of identity, leaving home, parenthood, joy, and longing.
Crisscrossing the pages of Awayland are travelers and expats, shadows and ghosts. A girl watches as her homesick mother slowly dissolves into literal mist. The mayor of a small Midwestern town offers a strange prize, for stranger reasons, to the parents of any baby born on Lenin’s birthday. And a lonely heart searches for love online, never mind that he’s a Cyclops.” (Syndetics summary)

Beneath the mother tree / D.M. Cameron.
“Beneath the Mother Tree is a spine-chilling mystery and contemporary love story, played out in a unique and wild Australian setting interwoven with Indigenous history and Irish mythology. This spiritual subtext becomes a stage for unforgettable characters who navigate vital questions of identity and belonging. The result is a compelling portrait of how our dark history and dreaming landscape can make extraordinary things of ordinary lives.” (Syndetics summary)