Summer of love / Katie Fforde. “ Katie Fforde has just been named Contemporary Romance Novelist of the year for her novel The Summer of Love by the Romantic Novelists’ Association. This is her 17th novel; her first, Living Dangerously was published in 1995.

The kashmir shawl / Rosie Thomas.
Rosie Thomas was awarded the prize for Best Epic Romantic Novel for the Kashmir Shawl, a multi-generational family story. Both novels are now in contention for Romantic Novel of the Year, with Joanna Trollope and Philippa Gregory among previous winners.”

Here are some of the finalists (in various categories):

Shattered sky / Helene Young.
“On a routine surveillance flight east of the Australian coast, Captain Lauren Bennett’s crew pick up a mayday call. A yacht is under fire. For the international smugglers operating below the radar of the navy and Border Watch, sinking a pleasure craft is just part of their day s work. Lauren has other ideas. As she pursues the men into the isolated country of Cape York, she ll need all the help she can get. That will mean joining forces with the cynical navy officer Callam Granger, who’s already shown his contempt for her. What will it take to convince him she’s right this time? Can they put aside their old animosities to outwit, outrun and ultimately out-fly the traffickers? Or will another death shatter Lauren’s life completely?” (Global Books)

River marked / Patricia Briggs.
“Car mechanic and shapeshifter Mercy Thompson senses that an evil is stirring in the depths of the Columbia River – one that her father’s people may know something about. And to have any hope of surviving, Mercy and her mate, the Alpha werewolf Adam, will need their help.” (Syndetics summary)

Archangel’s blade / Nalini Singh.
“In the intensely dark, violent, and romantic fourth Guild Hunter novel (after Archangel’s Consort), Singh focuses on the 1,000-year-old vampire Dmitri, lieutenant to the archangel Raphael, and Guild Hunter Honor, still recovering after a rogue vampire kidnapped and tortured her for two months. Assigned by the Guild to work with Dmitri toward solving the strange murder of a young vampire, Honor must confront the conflicting emotions he inspires, which intensify when the investigation bleeds into her past abduction and Dmitri vows revenge on her attackers. Their relationship develops explosively and becomes one of equals despite the centuries of age difference. Singh’s vampires, angels, hunters, and archangels engage in global power struggles within a complex larger story that new readers will find challenging. An engrossing narrative, vivid characters, and a well-imagined world mitigate those difficulties, resulting in a heart-pounding and strongly emotional read.” (Publishers Weekly)

Prince of Scandal / by Annie West.
“Prince… Ruling prince Raul, Prince of Maritz, is furious that an archaic law is forcing him to wed. But scandal and unrest has dogged this prince for years, and a marriage to recently discovered princess Luisa Hardwicke will help bring stability to the monarchy. Reluctant princess… Only Luisa is an outspoken, mud-splattered farm-girl, who isn’t going to come quietly! Even as she’s reluctantly transformed into polished perfection, Luisa challenges Raul at every turn – and he finds himself anticipating their wedding night with an excitement he never imagined he’d feel… ” (Amazon.co.uk)

The next always / Nora Roberts.
“Beckett has no trouble whatsoever talking to women. It’s just Claire who has him at a loss for words. It all began when Beckett fell hard and fast for Claire in high school, but Claire wound up marrying Beckett’s best friend, Clint. Now, more than a decade later, Claire, a war widow, is back in Boonsboro, building a new life for herself and her sons as the owner of the town’s bookstore. Even though renovating the local inn keeps Beckett busy, he still manages to bump into Claire at least once a day, and he still finds himself surprisingly tongue-tied. Finally, when Beckett offers Claire an early tour of the inn, it leads to an unexpected kiss. With the first impeccably written and richly emotional installment in her new contemporary romantic trilogy, Roberts delivers all the elements her readers enjoy, including a perfectly matched pair of protagonists and a plot spiced with danger, a touch of the paranormal, and deliciously tart humor. Readers will also relish the autobiographical dimension. The novel is set in Roberts’ hometown, Boonsboro, Maryland, in which she owns a restored inn and is the proprietor of Turn the Page bookstore.” (Booklist)

Magic slays / Ilona Andrews.
“Kate Daniels has quit the Order of Merciful Aid, but starting her own business isn’t easy. So when Atlanta’s premier Master of the Dead asks for help with a vampire, Kate jumps at the chance. Unfortunately, this is one case where Kate should have looked before she leapt. Original.” (Syndetics summary) 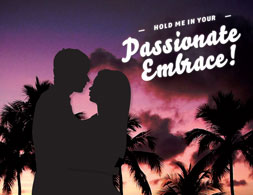 Now’s your chance to get started! To celebrate our new Mills & Boon collections, Wellington City Libraries is running a great new competition.

We’re looking for the best paragraph for a Mills and Boon romance which describes the first time the guy meets the girl (or the girl meets the guy).

The prize will be a basket of goodies including an e-reader  – the lucky winner will be able to download romances from our eLibrary, and pursue that wonderful pleasure of reading a steamy romance without anyone else knowing!

There are a few conditions for entering the competition:

So get out that laptop, or sharpen your pencil, and get writing!

When you’ve polished off your romance novel paragraph, just complete this entry form.  Alternatively, you can drop your entry off at any library branch, or post it to Wellington City Libraries,  P.O Box 1992, Wellington 614o (attention: Libraries Admin Team).

Winter is coming, so what can you do to cheer yourself up on a dreary, dark evening, or on a weekend with a roaring southerly outside? Why not take yourself out of your everyday life and banish those winter blues and treat yourself to a delicious, steamy romance to read!
Inside the pages of a Mills and Boon romance, you can meet princes, sheiks, Italian counts and Greek millionaires – not to mention architects, surgeons and doctors (and some of them are the heroines!). You can visit exotic locations in Europe, the Middle East and Australia and you can travel back in time to Regency England and encounter aristocratic rakes and feisty heroines.

But if you’ve gone digital, you don’t even have to go to the library – romance has gone digital too! Download a guilty pleasure or five on to your PC, Mac, smartphone or e-reader by visiting www.wcl.govt.nz/elibrary and click on the OverDrive link to get started.