Only a few British monarchs have ever written books. As a young king, Henry VIII published an attack on the Protestant reformer Martin Luther many years before his own split with the Catholic church.

Eight decades later, James IV of Scotland (later to become James I of the newly formed United Kingdom) wrote a variety of works including an epic poem, a treatise against tobacco and a study of witchcraft and demonology which was later used by William Shakespeare as one of his main sources for Macbeth. However, only one monarch has ever published what essentially is an autobiography during their life; Queen Victoria and her book Leaves from the Journal of Our Life in the Highlands.

Queen Victoria reigned for nearly 64 years following her coronation in 1837.  In 1842 when she was aged 23, she and Prince Albert travelled to Scotland for a holiday shortly after marrying. Their experiences on that trip made a lasting impression on them both and she soon became the first monarch since Charles I to have a home in Scotland. Victoria and Albert returned in 1844 and again three years later. In 1848 Albert acquired a lease on Balmoral Castle and its associated estate of 17,400 acres in the Deeside region, about 80 km west of Aberdeen and then purchased it using his own inherited wealth in 1852. In due course this isolated area was to become Victoria’s spiritual home and she returned there with her family almost every year for the rest of her life. These retreats allowed the royal couple to cast off much of the rigid formality of court protocol and to gain some sense of what it might be like to live a ‘normal’ life. Victoria and her family would roam the hills and explore the wild mountain streams as they chose. END_OF_DOCUMENT_TOKEN_TO_BE_REPLACED 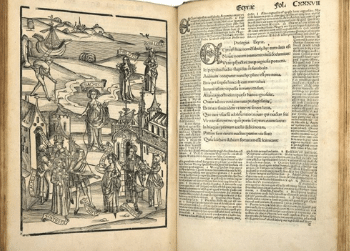 Selected from our Rare Book Collection is this beautiful 1503 illustrated edition of Terentius Comico Carmine, a collection of comedies by the Roman playwright Publius Terentius Afer Publius Terentius Afer (better known simply as ‘Terence’) was born into slavery in North Africa around 185 BC and was sold as a child to a Roman senator who took him back to Italy. His owner educated him and became so impressed with his wit and intelligence that he granted him his freedom.  Terence went on to write six plays based on the Greek Attic style of comedy, all of which survive to the present day. After the collapse of the Roman Empire, his plays survived as hand-written manuscripts which were preserved in monasteries for hundreds of years through the Dark Ages and into Medieval period. Following Johannes Gutenberg’s invention of the movable-type printing press in the mid 15th century, Terence’s works were among the first plays to be printed in Europe. This copy was published by Johann Grüninger in Strasbourg at the very start of the 16th Century. Though today part of France, at the time the city was principally German speaking and was the centre of the early European printing industry. The protestant religious reformer Martin Luther became a great admirer of Terence and frequently mentioned his insights into human nature in his own writing. One famous Terence quote which has inspired many is Homo sum, humani nihil a me alienum puto, or,  “I am human, so nothing human is alien to me”. Luther also suggested that his plays could be useful for teaching morals and ethics to youth. What makes this somewhat surprising is that Luther was known for his socially conservative views but Terence’s work is often bawdy with no shortage of risqué content.  His work Hecyra (aka The Mother in Law) of which three pages are shown here, is a good example of this. The play follows a young man who falls in love with a prostitute and includes drunken debauchery,  sex, domestic violence, and a farcical case of mistaken identity which wouldn’t be out of place in a Christmas pantomime…but everything works out happily in the end.

Amusingly, the first two attempted performances of the play during the Classical period both ended somewhat disastrously. The first was in 165 BC when shortly before it was supposed to begin, a rumor spread that a tightrope-walker and boxers were about to perform and the theatre was suddenly swamped by people expecting to see circus acts. The second in 160 BC was cancelled after the theater was again overrun, this time by drunk gladiator supporters. It was finally performed successfully on its third attempt later the same year. Another curiosity is that it was long thought that a musical phrase which accompanies a single line of the text in Hecyra was the only remaining written description of the entire body of ancient Roman music. However, its authenticity is now disputed and it may have had 10th Century origins. Terence’s newfound popularity during the Renaissance followed the spread of the reformation to England and his work had a notable influence on Shakespeare nearly a century after the publication of this edition. One intriguing thought is the possibility that another copy of this edition could have ended up in Shakespeare’s own library. This now-500+ year old volume came into our collection after being  gifted to the institution shortly after the municipal library was founded in 1893. At some point the volume was rebound in vellum, a hard-wearing cream-colored covering made from calf skin which (unlike leather), does not go through a tanning process but is stretched and dried without significant chemical treatment. With the Central Library currently closed, the book is being carefully stored in a custom-made acid-free enclosure in a temperature and humidity controlled room at the Wellington City Archives. The Library’s rare book collection, which was previously at the Central Library, has been safely moved to the Wellington City Archives who have very kindly agreed to house the collection for us while Central is closed. Items in the collection can be identified in the online catalogue by their shelf location being listed as an email address (enquiries@wcl.govt.nz). If you see something that you would like to view, send us an email with all the details included and we can arrange a time for it to be made available for you in the reading room of the City Archives in Barker Street (Te Aro). Note that all the books in the collection are reference only and they can only be viewed during the normal business hours of the archives (9am – 4pm, Monday to Friday)

As part of Heritage Month 2010, in association with the Wellington Region Heritage Promotion Council, a new display has been installed in the display case on the 2nd floor of Central.  Looking at the theme of the Environment, highlights include our copy of Sir Walter Buller’s A History of the Birds of New Zealand and Gideon Mantell’s (the “discoverer” of dinosaurs) paper on the exsistence of the Moa in NZ.  So if you’re passing by the 2nd floor, stop by some time to check out this new display.